New poems from our print contributors in the U.S. and abroad. 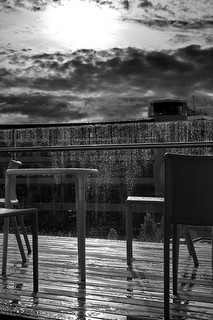 The Adventure of the Dancing Men

Isn’t this the Either/Or Fallacy? You can either be

saved or lost? Angels appear to assist only some of the men and not

others, who are wrested off the ladder by devils in silhouette,

as these men, monks, climb the Heavenly Ladder of St. John Klimakos

in ms. paintings and in due course icons drawn from the devotional manual

of the same name by the sixth-century CE desert saint:

dancing men, rung on rung ascending in thirty steps to the presence of Jesus,

who holds his hands forward to receive them.

As they stretch and strive toward the divine,

don’t they also, some of them,

kick back with their heels into the faces of those on rungs below? Inadvertently.

Don’t think about it: parcheesi, yardstick.

Don’t think about it: put one foot in front of the other,

consociational in time and place even with us, differing in degree,

these shapes are as letters of some alphabet, cipher, code —

the adventure of the dancing men, characters

lit from outside the galaxy, lit from within.

Demesne runs away with topsoil,

and the audacity of claims.

For all its openness, barbed wire

layer — neither night nor day.

As these hills run away into

the river system, the reverie

of possession is given its due:

images stall and lapse into metaphor,

and all the false truths of belonging

are grit washed from the rock beneath;

then the rock itself breaks into grit.

Don’t be astonished by the intricate

carvings of water over hard surfaces,

the etching and marking of mapped forms.

Geometry is elusive when it appears sound,

though it’s true the infinitesimal

yields large, even the grain missed in the wash

tells us more than the large movement

that led to it being stranded.

Or the revelation of a fossil:

all that is embedded in our knowledge

restrained by fear to acknowledge

then ambivalence of demesne.

The house huddles further into the hillside

To escape the heat, heat-stressed trees

Giving up the ghost: flyblown summer’s

Growing body-count. We are still as can be

Inside the ticking house. Sudden and brutal

In this is the mystery of stellar bodies

And the actions of gravity and dark matter.

When contractions will force us outdoors,

The house crumpling, not huddling: still hot as hell:

To be hurled out over the hills and plains,

Marking new points on the compass:

Trees struggling on, suckers reaching up

Out of burnt stumps and rootstock.

So dry we fear only the effect of rain:

The dread of surprise, the violent results.

standing on the highest balcony.

leaning on the rusty rails of dawn,

and four in the morning receding into five.

and clasped your shawl to you inside

the most, most autumn city night.

the wind made you close your eyes and

turn, as I realized

I was parting with La Figlia Che Piange

and had an urge to tell you as you left,

“Stand on the highest Beirut balcony—

lean on the rusty rails—

weave, weave the moment in your hair—

clasp your shawl to you and close your tired eyes—

feel the autumn wind and turn

your back on the roofs and familiar skies:

but weave, weave the moment in your hair.”

There is coffee. It goes well

with the scene we’ve set up

in our heads, somewhere

it’s strong and the night

is stronger. It falls

equally upon us and upon

the city, and the city is stronger. There

it riddles the dark with infinite

the liquid threads it weaves.

We’re on a balcony, the tenth

floor. From such height everything

seems small and all is larger.

From such height one can begin

to understand, one can

get lost. From such height there is no

difference between the weight

that settles and the one that

Zeina Hashem Beck is a Lebanese poet with a BA and an MA in English Literature from the American University of Beirut.

The next season flaps its soon drawn awns,

All prices slashed. Unmeasured in the wind

The cleft of unchecked mast lines,

Autumn’s no hint, summer’s no longer.

In the distance a single skiff ices the jetty’s craw.

Terns stitch the one torn cloud.

Not quite sound, not quite its absence.

Only this register: Everything’s over

By a toe. A few feet above water

Some light mistake glides about the harbor.

Each year some new mall fountains up, the Food Court assimilates

Its corporate heart into the lost pasture of the village square.

Swine once scavenged there, and men, flapping in leather helmets,

Hurled hard bodies at one another.  Further back they swung

Fat sticks at rocks. The milk once loved udderly froths at Starbuck’s.

Some soccer Mom spoons $5 worth of guilt from a daily cup,

Of the Beautiful.  How can she find it, now, when they couldn’t then?

The world past, the one passing meld into the mile she has already

Hoofed this morning.  They have named a shoe for her. Not quite

Ovid’s ideal, not quite Emerson’s. Mall Walkers they call them.

If only you are listening, you can hear her mutter, Too often, George,

You stay too much indoors,though that is not exactly what she says.

Hello, I am Billy Pilgrim. I am her husband. This is my translation.

I have been to Chicago and back again. I am originally from New York:

Call it Ilium. Where I must go again. I simmer in the tent of my own head,

In this oasis, under The Cleveland Plain Dealer’s spread. My wife fattens

While I steam. Retired by trade, I fix the vision of anyone who does

Come in. Come in. Let me grind your lens.  It is really my mother

I am talking about. It is Dresden. I would really rather speak

Of something else. I am Willard. I am Bailey, some kind of George.

Or the Reverend Curtis Hartman. It has taken me this lifetime

To find the divine manifesting itself in the barren shelves

Of the last two shopping days left before Christmas.

When my wife wanders I rush through the aisles

Sharing my vision, these silk accouterments, the sheer possibility

Of Kate Swift’s body, the wildest dream of my wife’s family’s

Undergarment industry.  Who would ever imagine

The wonder of such interiors, bamboo flourishing in winter,

Ohio offering through its maternal crack

The fecundity of its dark soil, trunk of some living palm

Thrust in the break of the Food Court’s tile. In Dresden

At least a few people crawled out of the steaming buildings

Despite the best intentions to stew them:  Hello I am Odysseus,

Come to throw out my own grandchildren. The Northwest Passage

In which we hear the O of the Orient, that dollar, that dream.

You who have congregated always by the sea, lift up your sushi,

Your curry, your whole bread.  I ask you to consider the luxury

Of the American interior, how even now it pearls in our sleep,

Victoria’s Secrets not quite beyond the Half Moon,

The Hopewell’s reach. Banked by your great river,

In Tompkins, Battery Park, stay with me awhile, hear me out.

Stephen Haven is the author of The Last Sacred Place in North America, selected by T.R. Hummer as winner of the New American Press Poetry Book Prize.

There’s a moment I nearly believe your dermis

than the lower, you’re a lifeboat of inflated

grief. Your eyebrows buoy suddenness too soaked to sink.

Your nose, tall like a flaw, nestles warmth. You’re honest,

a retiree of redemption, have jobs decent

is just a nasal bridge. It’s windy there, my fake

panache aches. If I were a nation of owlets,

I’d own you as my diplomat for your forehead

What carved the short crow’s feet? Your reluctance to shave

or the clutching onto foresight? Of course, bad eye

cream. Don’t frown – I’ll land on your jawbone with jargons

that renew the old curve. The face is a model,

a potential. I’ll bring glue and meaning. A blue

I make myself your content when your face sings not.

Nicholas YB Wong received his MFA at the City University of Hong Kong and is a finalist of New Letters Poetry Award.