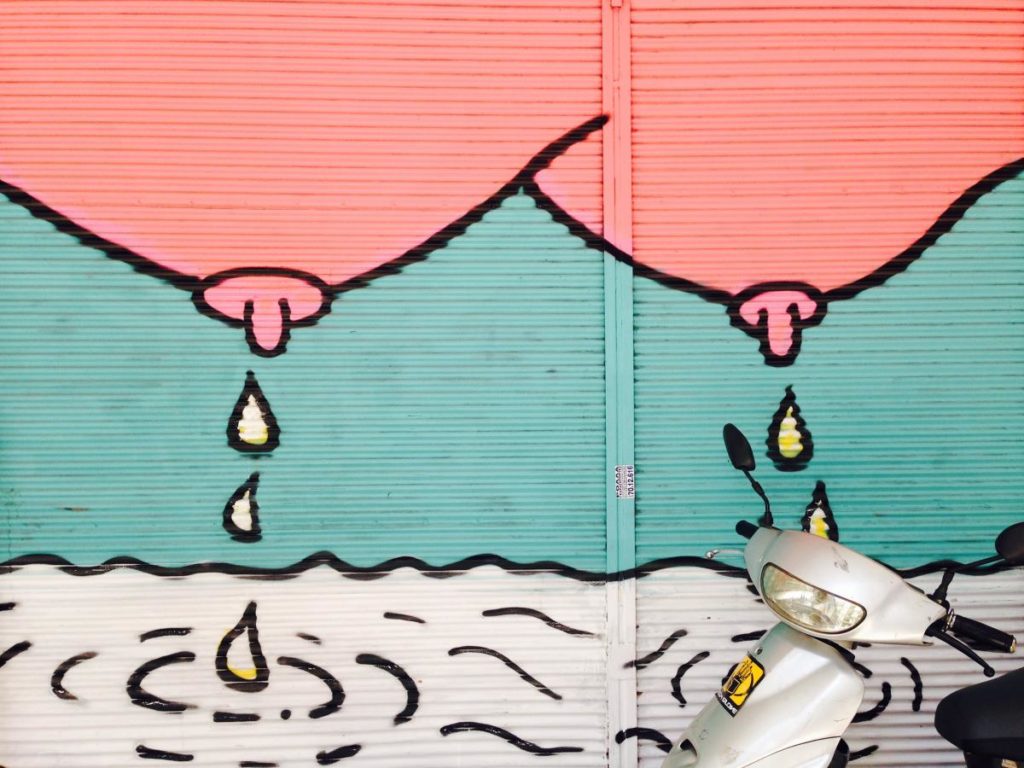 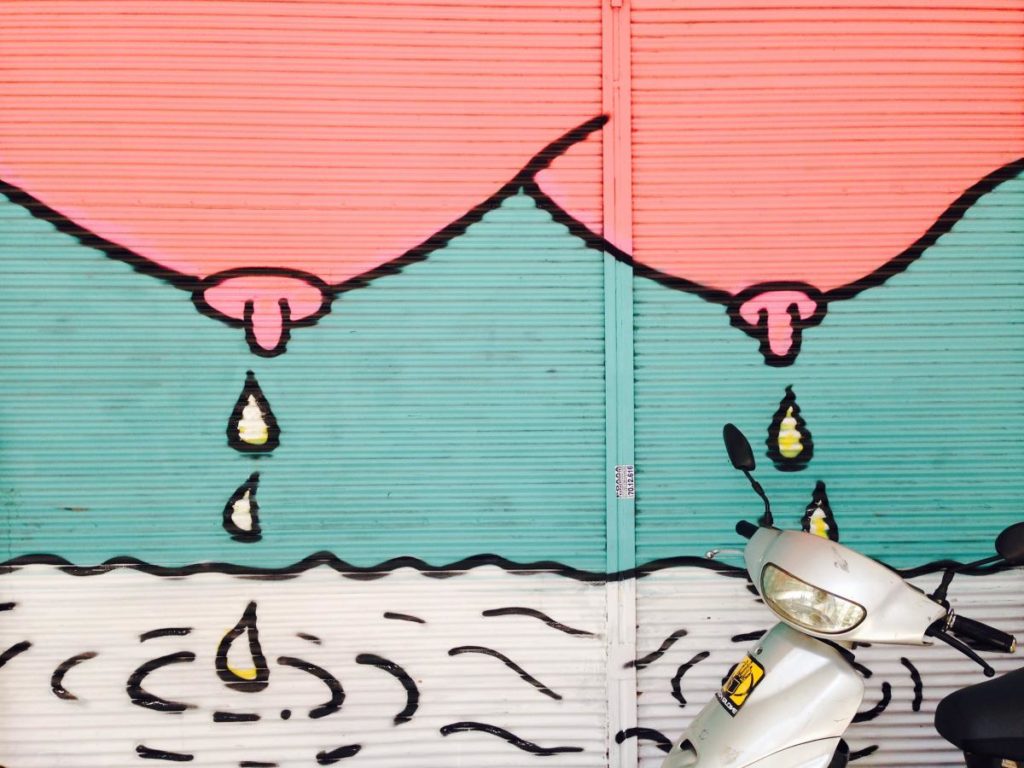 We are at Argoura and M has asked
the owner to feed us as he likes.
I want to know if Athens is —
but there’s fish on the table first and
— Athens, D says, is exhausted.

The state, Y says, of being used up
completely. The state is corrupt.
Limited, C says. Exhaustion is
a reduction to absurdity, in math,
a limiting process. Inscribe a polygon

on the fishplate, Archimedes
said, and watch it exhaust;
use the truffle oil to draw
an octagon, the bergamot
dressing on the tuna

for more sides, go go go keep
going until the fishplate is
dead; like Athens and
the area of a circle is clear
like Corinthian honey

and Athens, M says, is floating
in it like a pistachio
Aeginian, brought bruised,
on the nose of a flying dolphin
sticky as shit. Athens, C says

is sticky as shit. I saw a pair
of breasts, I said, undulating breasts
sprayed on corrugated tin dripping
milk and honey, tripping up a street
in Psiri. Fat drops thin with milk

and amber pearls, a perfect hipster
Instagram opportunity. Whose breasts,
Y asks, were they pink? The breasts,
D says, of Europe. Nipple tweaked
by the IMF, swollen glands of the poor.

Y licks his knife clean of sea urchin
because Y is from Crete where
Europa, Phoenician girl, then goddess
was, well, fucked by a white bull.
United, I mean, with a white bull.

Athens, D says, will latch on,
catch on, teeth on. Galactopoiesis:
to make milk; poiesis: the root
of poetry,or to make, Plato says, a lie.
Athens, C says, is a lie. A paradox.

than most women. Athens needs cuts.
A caesarian to birth its guilt
because on the Germanic tongue,
debt and guilt are both the same thing
(like a sacred union/fucking mistake)

of marble, its many, many many, many
years of de-colouring, Athens must
sell herself to whoever will have her.
Finland, that’s you, D is talking to.
Athens needs a hero. Born of a god

and a mortal: sacred union/
fucking mistake? Athens needs you.
She needs her internal organs
to function, smooth and ripe, pink
as an ox throat, gurgling tepid, pores

steamed, breathing well, pee
tinkling light-luscent into porcelain
as if after a detox that makes
Anne Hathaway look drab.
Anne Hathaway is American.

She might save you. Athens,
Y says, we have been speaking
for you, for too long.

Sria Chatterjee is a PhD candidate in Art & Archaeology at Princeton University.

Should I be
stumped
by the greatness

of God, or—
unlike his
decisions—

surprised
how arbitrary
these fields of gold
and how they’re woven
into a story?
Who then is
the protagonist
when trillions

of single cells
all think
for themselves?—or together?—

Shall I
celebrate
my insig-

surprised
how a wave
of snow curls

Use of a Drum

will time come along
& snuff it out?

Marc Vincenz was born in Hong Kong, is Swiss-British, and has published eight collections of poetry.

1.
Disordered hardwoods winnow the late light,
hold onto the sky-blown swag of cloud, white, scentless petals,
memories caught up from the past. The past,

are made from goldfish smoke and jinglework.
But stillness summers there. And the people I’ve loved.

3.
I’ve loved the door dangling on a hinge, wedged open
onto the droveway and hayricks. The scene revised into clarity.

But the mind holds no one certainty.

4.
Because I hold no one certainly, for a moment love
may clumsily delete love. On the wind, dog rain.

I can’t get beyond the windshield’s netted streaks.

5.
The streaks make static nets that mar the voice
on the cassette so meticulously saved. Timbres

that leave longing under-nourished, tulips
bleeding back into the bulb.

6.
On my palm it sits, the untranslatable cigarette case
belonging to my brother who got it somewhere. And kept it.

Now I will never know its meaning.

Aubade with Weave and Fire

April dawn rushes on the sunlight, dins-in, frays
the picks & ends of sleep.
The voices we hear in solitude become faint and inaudible
as we enter into the world.
The mind’s weather is bird-clamor, a nest
of warpweft & heddleshuttle, muddied down, & reed.
Dreams test the weave of my soul’s nettlecloth.
I have cut the cloth too wide.
I lip-loom prayers anyway & tell myself
I only half-love the world; my low-piled life
with its cones of silence & privileged cares.
But speech alone doth vanish like a flaming thing
Through the open window, sun-glazed leaves start to babble,
are tongues speaking fire-glint and forged edge.
When flames do work & wind, when they ascend:
so did I weave myself into sense.
My teeth hum with plans though a small galaxy
of false alarms bangs beneath my sternum.
My breast was full of fears & disorders; my bent thoughts
like a brittle bow whose arrows did fly asunder.
Mulish, I do & do still bound by broken bands
of fired clay, broken pieces all asunder, God hunt me not
betwixt this world & that of grace.
I am bewildered brittle crazy glass,
a bowling pin made from molten sand.
Thinness is my truth.

Laurie Rosenblatt is the author of Blue, Cloud 10 (a collaboration with the painter Richard Raiselis), and In Case.

Into a future no one can foresee
we look again: the time is now, past now,
to Build a Better Burb—resounding catch phrase

from history and itself. Design is all,
so Simons, Cobb, and Lovett offer theirs:
“Upcycling 2.0,” a plan requiring

what we throw away to serve some purpose,
trash not just recycled but improved,
suburbia changed, transformed to paradise.

It won’t just happen. Vision is required.
There must be vistas, open land unfolding—
planted, planned, an aerial view pristine,

eternal progress; I myself have seen
his birthplace and his mall not half a mile
apart, and both have served in different ways

as art and commerce: upcycling’s domain.
In paintings that depict the project’s aims,
the atmosphere is sobering. Such light—

and trailing every image is the jargon
that defines it: “Vertical Integration,”
“Incremental Renewal,” and the like,

though I like best the proudly pennywise
“Pooled Income Stream for Public Benefit”—
Translation: Want a future? Pay for it.

I get it, and I truly hope it works,
though such ambitions leave me skeptical.
Will vendors sell organic vegetables

on roads turned “agricultural corridors”?
Will water towers scaled down to fit in parks
shade those who stroll beneath, as in this vision

Upcycling’s seers, Columbia students all,
will split a cash prize, like the other teams
whose grand designs make sport of future shock,

to please the judges’ politics or eye.
—And yet, I find myself drawn back to paintings
that define the project’s perfect circle—

nothing wasted, discord harmonized—
as if I could walk into any image
that I choose and join the shadows there,

shadows that might be us, but aren’t yet,
calmly gathered, sprawled out for the next
outdoor performance by a few more shadows

guaranteed not to be overrun
by shades left homeless (no one’s homeless here);
collectively composting, as directed,

transparent as ghosts or wisps of smoke… Are we
the generations Whitman once foresaw?
I think about his mall, futurist vision

half a century old, now obsolete,
repeatedly renovated, incomplete—
Was it that long ago I glanced up, dazzled

by its ceiling that seemed miles away,
where one balloon held still? Life, Whitman wrote,
comes rising to the surface in upheaval—

Airships dangled, weightless, in the skies
once, long ago; ships broke free of their berths,
invulnerable ocean liners rumbling

through gray mist. They carried shadows, too.
Like them, we’ve no idea what world will follow,
when we, too, are claimed for some new purpose,

sadly, joyfully. Who’ll be reborn?
Step forward; take my hand: and on the day
our lost past surfaces, we’ll walk on streets

eternal like ourselves, all debts in balance,
wrongs forgiven, wasted lives reclaimed,
the only shadows left the ones we cast.