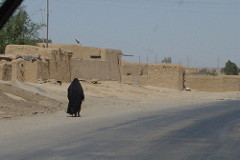 And the clucking tongue of a woman in her black chador . . .

And the feeling that this may be less than what’s real . . .

I cannot translate what the old man has said, grinning toothless from
the computer screen.

He’s cursing the Mullahs and all that’s hypocritically holy in Iran.

Why don’t you bring more of your story into your work, the committee asks.

Because I don’t have the strength even for interviews, he says.

And later, to me,

It’s a wonder the music of Shajarian alone hasn’t broken my heart.

He sounds like birds beating their wings against the black glass of night.

He sounds like lovers whose longing expresses the desire to forget that longing
ever was.

The exiled singer Marzieh in her silver, matronly robes,

her posture erect as Eucalyptus shivering in the Mediterranean wind.

Be that thou art, that they may.

I can’t remember the stories he tells.

My eyes become mirrors as he launches in

dreamy and heart-broken, then angry and afraid.

The weight of empathy hardening into a cool reserve for

yes, yes what was, what hadn’t ever been or should.

The grammar of affection so steeped in past want.

If I could take away that need, I’d race back to you,

to some place nested in the cobbled wreck of our home.

Belated witches. The young girls sashed in black and green.

The cry of hope now digitized in the bird’s faltering song.

This displaced placing of the center’s hold.

Who said it couldn’t be just so?

Andrea Scott has published essays, poems, and translations in journals such as Denver Quarterly, jubilat, Web Conjunctions, Salt Hill, and Chicago Review, where she also served as an associate poetry editor. The poem featured in this journal is an excerpt from a long poem in her manuscript Arab Springs. She taught in the Princeton Writing Program for five years and joined Pitzer College in fall 2013 as assistant professor and director of the Writing Center.