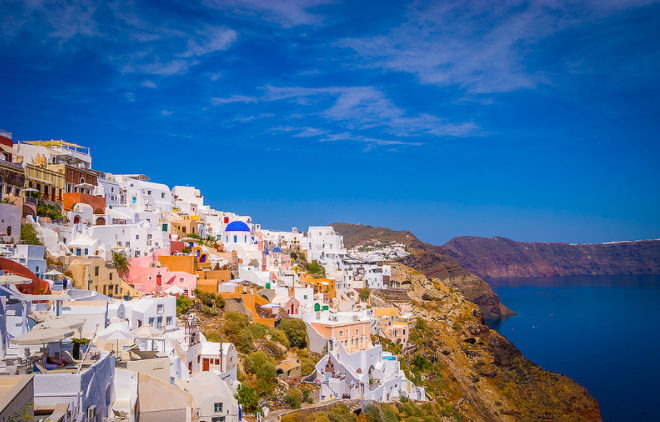 In Greece, people visit islands. There are a lot of islands to visit. They head for beaches, coastline, the sea, to lie on the shore and look out at the water. But to find an island, you should really look inland. The island is the thing behind you. Turn around.

On a small Cycladic island, a second home for me by marriage, I swelter by the beach. Idyllic, busy, and anonymous. A limited sense of context: a watery horizon; sand; shops, bars and restaurants. At 40°C in the shade, it’s all swimming costumes and ice cream and plastic toys.

A volte-face, and the island opens up. Away from the beach, there’s foliage. There are fields, stonewalls, fig trees, capers, thyme, olives. You might see animals – lizards and vipers and birds of prey.

Even the aridness of the Cyclades cannot prevent growth – scrubby herbs, bushes and thorny things that prick your ankles. The terraces and fields are where the rest of nature interweaves with the imprint of that extraordinary species, humans. For the casual visitor, the autumn crop of grapes or a bag of wild capers comes as a surprise: who would have thought this parched land could produce such riches?

The landscape itself is a historical document. Even the dry scrub is testament to ancient pastoralism and shipbuilding. Trees were felled and voracious goats ensured no replacement saplings would survive: the maquis of the European Mediterranean is a direct consequence of human action. This absence of trees makes the stone-walled terraces necessary, remnants of centuries of land management, holding the soil against the hillside. And here and there other fragments of masonry are clues to the cultural past – ancient towers, windmills, a Frankish castle, dovecotes. Networks of paths and donkey tracks, pre-dating cars and tourists, speak of a busier, more productive past for the stony fields.

Move inland and when you are high enough, you can turn around and look at the sea again. From the beach, it was a vague horizon and gently lapping waves. Now it is a different sea. The wind patterns the surface. On calm days, the sea is oil, as the Greeks say: on rough days the white horses cavort. Its color suggests depth and depth suggests danger. Vessels are dwarfed. Now the dangers of the meltemi (summer winds) or winter storms become clear. Odysseus, tiny in his open longboat, could be tossed and torn by Poseidon’s wrath until he didn’t know North from South and all his crew had been washed overboard.

From this elevation, the sea and the little parcel of land on which you stand are suddenly contextualized. Archipelago: rocky peaks spring out of the level sea-plain, tantalisingly close. You are surrounded by their possibilities. Here on the windy slopes, away from the shore, the stage-set of the Odyssey is revealed. Proto-historic island-hopping would have made so much sense, especially when the sea is glassy and the straits between islands look almost swimmable. You could hop and skip your way on these sunken mountains all the way from Asia Minor in the east to the pillars of Hercules in the west.

These stepping-stones have seen a succession of cultures: settlers, visitors, traders, raiders. From the prehistoric Cycladic people to the contemporary, seasonal invasion by Northern Europeans, the archipelago has been a strangely remote melting pot. On these tiny outposts, the Viennese, the Genovese, the Franks, Turks, and of course Greeks, have governed, traded, farmed and thieved. They have left their marks: the “Frankish” castle; and houses of Italian nobles in the medieval capital, Kastro; Hellenised Italian names (Francescos, Lourenzos); and a distinctive island accent with strangely Latinate consonants and lengthened vowels.

The reason for these invasions, raids, and friendly visits must surely rest in the proximity of the islands in the archipelago: these otherwise remote rocky promontories provided a chain of stopping off points, havens and fortresses. We live in an age where land and air passenger transport predominate. But until recently, it was more viable to build a boat and sail somewhere than to build a road and travel over land. Water was not an obstacle, it was a facilitator.

So up on the hill you can orient yourself to the marinescape in which you find yourself, and, dreaming of Odysseus spying out the next step of his homeward journey, blissfully unaware of the machinations of his divine enemies, you return to the beach.

Ian Maclellan now lives and works in Scotland after many years in other parts. He blogs on Diasporran.