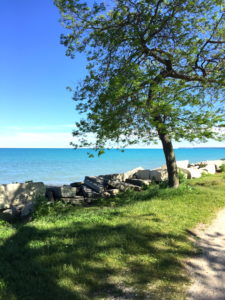 How long have you lived here? 10 years

Three words to describe the climate: cooler by lake

Milwaukee is a beach town. It has miles of waterfront, not a few of them lined with sand. I grew up in Los Angeles and rarely saw the ocean. I now live in Milwaukee and see Lake Michigan—whose horizons, for a Milwaukeean, rival the Pacific—every day. When it’s sunny, and it often is, the lake lights up the whole town.
On land, Milwaukee’s most striking feature is how narrow the lots are and how wide the streets, at least near downtown. It’s made putting in bike lanes relatively easy; the width was already there. The Germans who built Milwaukee seemed to be of the mindset, “well, you never know when you’re going to want a parade.”

One stereotype to dispense with right away is that we’re not Minneapolis. I’ve had many people from the frayed edges of our country—the coasts—hear me say I live in Milwaukee and reply, “Oh, I’ve always wanted to visit Minnesota.” And when I correct them, they shrug, as though I’m splitting hairs.

The other fundamental stereotype, of course, is that we’re an overweight mob of beer-swilling cheeseheads, and I can dispense with that, too—this is a fit, active town. 80 degrees or eight below, people are out exercising. Our fleece ownership rates rival Seattle’s. There’s a massive cycling scene here (see above), complete with Tour de France-style races throughout the summer. And on the sidelines of those races, much, much beer and cheese being consumed, but that’s mostly about being true to our local economy. I’m sure if I lived in New York City, I would eat a lot of big apples.

(Oh, and Laverne and Shirley: Mention that to a Milwaukeean and you’ll only get a blank smile, if that. Milwaukeeans bear the show no hostility; it’s just not a thing here, not even ironically.)

Before the railroads made it all the way to Chicago, Milwaukee was a faster way west. Ships coming down through the Great Lakes from Canada would stop first at Milwaukee, allowing you and/or your cargo to hop off and start the dash to the Mississippi River and points west. Then the railroads came, and suddenly Chicago was a couple hours closer to the east coast than Milwaukee.

So when people say Milwaukee missed the boat in the late 20th century because it bet so heavily on manufacturing, the truth is, that boat, or train, actually left a long time ago. Which doesn’t mean the city has been in endless decline, but rather that the city has faced challenges before and survived. We made a lot of auto parts for Detroit once upon a time—I live next door to a guy who still makes seatbelts for Chrysler—but now we’re reinventing ourselves as the Silicon Valley of water, which might just work. The university where I work even has a small ship for its freshwater scientists (given the amount of airtime the ship gets in university promos, I’ve been asking if he English Department could get one, too—perhaps an old whaler for the Melville seminar).

The immigrants who built this community really believed in community—those wide boulevards (see #1) led to countless parks (that feature endless amenities, from archery to lawn bowling and not one, but three cricket pitches) and community spaces. When I first arrived here, I heard about the Greater Milwaukee Foundation—a group whose name I thought referred to the wider region. But no, it turned out they were founded in pursuit of a greater Milwaukee. They, and a lot of us, are still chasing that. We’ll get there.

4) Common jobs and industries and the effect on the city’s personality. . .

At this point, any Milwaukeean is reminded that no matter the questionnaire, an excellent answer to any question involves beer. And there are a lot of breweries here. We somehow lost a couple hundred headquarters-type people from MillerCoors to Chicago after the merger, but thousands of Milwaukeeans still make macro and microbrews here. At Miller, it used to be that employees got a case of beer a month, a case on their birthday, a case at Christmas: if you were born in December, you had 72 beers coming to you that month. Such a culture, yes, does have an effect on a city’s “personality.”

Milwaukee still makes things. Not just beer. Motorcycle power trains and water meters and, as I said earlier, seatbelts. Which you might expect. What you might not: a lot of high-tech medical equipment, but that’s here, too.

And we make a lot of art. When we first moved here, I thought we would go on cultural excursions to Chicago all the time. It turns out Chicagoans go on excursions here.

One thing we don’t make here anymore is typewriters. But this is the town where they were invented, and so I like to claim that without Milwaukee there would be no 20th century literature.

The first drinking fountains in the United States were made just up the road in Kohler, Wisconsin, and everyone here calls them what Kohler has called them since 1889: bubblers. And while locals usually like to safeguard their slang against borrowing, I think the world would be a better place if everyone used this term worldwide.

A final note that addresses both local vocabulary and local food: I’ve mentioned beer too many times to do so again, but its steady companion, especially in summer, is bratwurst, or brats. Not long after we moved to Milwaukee, we went back east to visit friends. They planned a cookout; trying to be good guests, we emailed, “Can we bring the brats?” A few hours later came the nervous reply: “Um, sure—but please know that your children are always welcome here.” And so they were and so is anyone—child or adult—who’d like to come see Milwaukee.

Liam Callanan is author of the novels The Cloud Atlas and All Saints, and his newest book, Listen and Other Stories.