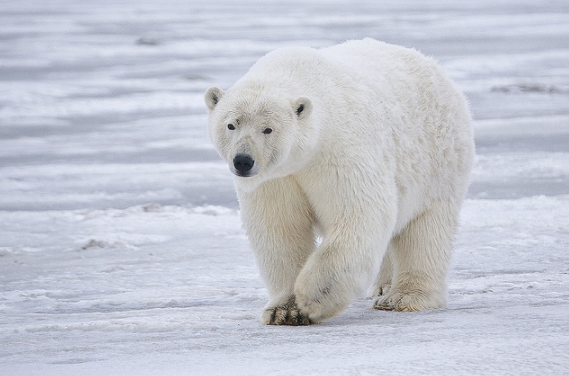 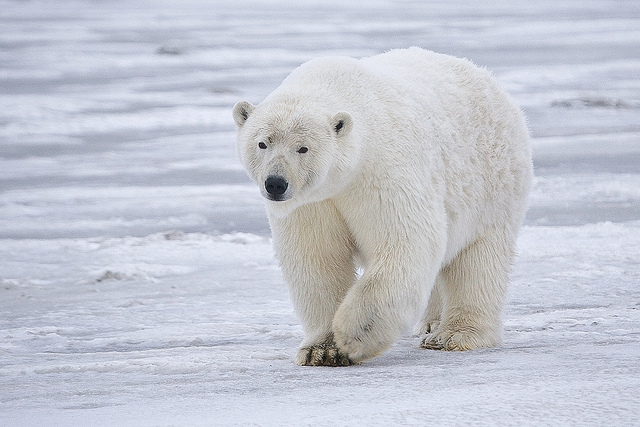 North of the Long Range Mountains in spring time, where the road swings east off the long northerly climb up the west coast, and a little farther on, back to the north again to the land’s end on the Northern Peninsula of Newfoundland, a place where Norsemen and women came ashore 500 years before Columbus, and the great icebergs, calved off the great Greenland ice sheet, march along the eastern shore with the currents of the North Atlantic: here, in this place, a polar bear passed by.

“Have you heard?” the Parks Canada employee said to my partner, Karen, and me. “A polar bear sighted on the road this morning, about ten klicks this side of the airport.”

“Not far at all,” the woman said. “I guess it was asleep in the ditch. Pretty common to see a few this time of year. They come down following seal. But it sounds like it was headed back out.”

We had a two-day drive ahead to catch our flight out of St. John’s, so we set off under the glory of those long blue skies and the sun-shimmer off the waters at Spillars Cove, Noddy Bay, and Gunners Cove, where Annie Proulx wrote The Shipping News. We stopped at St. Lunaire to buy jams at the Dark Tickle. Local berries endemic to Newfoundland: partridgeberries, squashberries, and bakeapple berries.

“Have you ever seen a polar bear?” Karen asked the shop’s proprietor, when news of the recent sighting came up.

“I had one try to get into my house,” the woman said. “It was pushing against the door. Luckily the door opens out, so it was pushing the door closed. But it did get in to another guy’s house. He drove it back out with a shotgun. Just the noise of it; he didn’t shoot it. Then it came back here. We have some chain link fence in the back of the house, to keep the dogs in? That bear cut right through it with its claws. Want to see it? We kept it to show tourists.”

The fence section wasn’t pushed in or bent. It was cut, raked right through by bear claws.

“They’re pretty strong,” the woman said. “Oh, and we had a couple of ‘em—a momma and her cubs—cross the road here, right in front of the shop.”

We traveled on, caribou feeding and loafing in the stone barrens, and then the road turned south again along the strait, and along under Labrador, dark and rising, on the other side.

I thought of the oil worker at the B&B in St. John’s a few days ago. He works on the largest oil platform in North America, he told us, some 300 kilometers off shore. One night he and some of the guys watched two polar bears trying to get up onto the footings of the platform, maybe for a rest. The bears swam about for a bit, growling up at them, and then swam on.

“They were probably all right,” the fellow said. “They can swim two or three hundred miles.”

Coming into a place like Newfoundland, you come into the presence of such stories, and the more you travel in their presence, the more the stories become part of you—you can feel them becoming part of you, the way you can feel beach waves surging over your bare feet, or cool fog pressing up a slope, or a knife point. I think it’s right to talk about it this way, that such stories keep a kind of territory, and you have to come into that territory to have them. They extend outward, too, beyond both place and time, the places and times such stories are made. Surely, long ago, those Norsemen encountered polar bears. The reach of such stories has limits, though. We don’t talk much about polar bears in Texas, for example. So if you want a certain kind of story in your life, make a slow and patient journey into its presence, and then wait for it to show up.

Farther south, at Jacksladder, we feasted on moose burgers, pea soup with a doughboy (“It’s like a little pudding,” the cook told us), and cod tongue fried in scrunchions, the salted back fat of a pig. “I’m going to fix you a real nice taste of Newfoundland,” the cook had told us.

Kurt Caswell is the author of three books of nonfiction: Getting to Grey Owl: Journeys on Four Continents (released in July 2015), In the Sun’s House: My Year Teaching on the Navajo Reservation, and An Inside Passage.