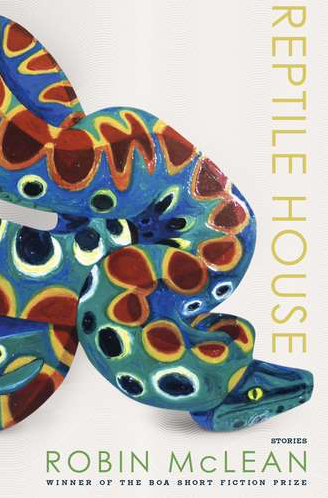 A book for lovers of language, Reptile House won the 2015 BOA Short Story Fiction Prize, sponsored by BOA Editions, Ltd., a publishing house committed strictly to poetry, until 2007 when it launched its American Reader Series with the goal of publishing fiction “more concerned with artfulness of writing than the twists and turns of plot.” Indeed, the nine short stories that form Reptile House seem to spring from language in an intuitive way.

This passage from “No Name Creek,” a story in which two brothers, Ben and Boak, head out to hunt moose on the last day of the season is a primer in the way Mclean’s stories feed off language on multiple levels. Ben, the narrator who happens to be a poet, tells a complex story of lost love and fraternal competition by defining simple words:

Poem: a set of words put together to say something that can’t be said. Ben once slid one in Sue’s mailbox in his best pretty longhand, but Ben’s longhand and Boak’s longhand were perfect twins.

Mix-up: a mess that causes the wrong or undesired result, brought about by fear or happiness or love or an absent mind or poor penmanship.

Sue: pretty, sweet, nice, sets her chin on her knuckles while listening. Gap-toothed. Holds her head while laughing hard.

Mix-up: a terrible mess brought about by poems. Boak won that won too. Boak always won.

“How the world is declining,” Boak said. They shook their heads at injustice. The brothers walked on, sweated and walked. They heard gunfire the next drainage over and walked faster.

Leg: a necessary appendage, needing another.

Ben’s definition of leg, which circles back to his definition of hand, also refers to the brothers’ dependence on each other, despite Ben’s pain since Boak married Sue.

McLean’s language is generally more elusive and intricate than this particular example suggests. Her usually omniscient narrators often express themselves in stream-of-consciousness. They are contemplatives, dreamers and fantasizers, historians and fable-tellers. They know both the future and the past.

In “The Amazing Discovery and Natural History of Carlsbad Caverns,” first published in The Common, Mel and Mike, two volatile young soldiers who are due to ship out to Vietnam, drink all night, procure a pistol, kidnap, and kill a local cab driver before going AWOL in the desert. This plot, which includes the chase and attack of a vulnerable woman and random details, like the fate of Mike’s belt—(“But the belt was gone forever, kicked under the bar by a girl’s pink heel, never to be discovered by anyone ever, although a long-handled broom will almost grab it next Easter.”)—is ample material for a short story, but “The Amazing Discovery…” also incorporates a mysterious and magical sombrero, cavern folklore, the bedtime stories about a cowboy named Jim that the cabbie tells his four children—complete stories in themselves—history, fantasy, magical realism, the afterlife and even the beforelife, when the cabbie’s cave tales merge with the main narrative:

Way back, this desert was an inland sea. These mountains were coral reefs with caves big enough to fit a town. The reef hugged the eastern shore, eel and sharks, the sponges and urchin had children who grew up and had children who died on the reef and it rose up fine and tall with all their corpses.

The paragraph continues, intertwining geology with the the cabbie’s daughter losing her tooth and a Cowboy Jim episode.

Jim rubbed his leg in the dark, the real dark, and a real leg with a real boot on the end of it. This desert was once an inland sea and Gloria tripped on the foot of the table. Just a little sprite. Of course, there was blood, the girl had cried, but Jim had groped the ground and found her tooth. Time passed, ten million years. Jim dipped the tooth in the pail until clean, the roots of the tooth were exactly like a screw. He held her head between his knees, the small glorious head, one million years passed, and the reef busted out lean and sharp, those mountains there, brown and pretty, a girl’s round belly, round as a melon on account of breakfast, and screwed that tooth back in her head…

McLean’s next paragraph returns us to the story at hand:

The cab cut east some miles. The moon set. The searchlights lay down. The cab halted nose up on a dune that looked exactly like a cresting wave. Mel got out and kicked the tires. Mike sang a marching tune, the stars faded to a slice of sun.

“Get out and dance,” Mel said.

Such juxtapositions of epic and human-scale elements define McLean’s work and ambition as much as her innovative prose. While “The Amazing Discovery…” is the most complex of these stories, “Rabbit’s Foot,” in which William, the youngest and favored brother of seven, becomes entangled in a rooftop bar fight while defending his older brother, is perhaps the most accessible. It begins:

“Fight on the roof!” A steel door slammed above.

The fight was more of a skirmish: two guys, one girl, someone’s dog. It was mostly played out by the time Tommy and Billy slammed through the door. The contestants were still chest-to-chest at the burn barrel.

As the evening wears on, another fight develops. This time Tommy and Billy are in the middle of it, and McLean shifts to her poetic voice to encapsulate the story’s tragic elements.

A satellite circling within earth’s gravity is falling the whole time.

He fell for an hour, equals forty boys back-to-back, or twelve girls with some pleasure.

The air was nice. The snow slapped his chin.

A fly is the lowest thing always repenting.

A siren for a meteor a mile wide crossing Polish gibberish.

The snow will be one hundred feet deep, I promise, silky like flour.

No cornfield or cow.

Out of my way.

It’s risky work, and it succeeds better in some stories than others. In “Take the Car Take the Girl,” a wife seeks revenge on her cheating husband by arranging to steal his new and much adored car and give it to a busboy who’s caught her attention one night in a restaurant. The story is told in a close third-person point of view that shifts four-fifths of the way through the story, abandoning the wife, Tweedy, and the story of her complicated and troubled marriage in which the reader has become invested to escort the busboy into his future with the stolen car. Unfortunately, his story isn’t nearly as interesting as Tweedy’s, making for an unsatisfying conclusion that reads like the author got lost.

For the most part, however, McLean knows exactly where she’s going and takes care to ground her stories in realistic settings and vivid scenes. For instance, “Cold Snap,” the apocalyptic opening story concerns a woman, Lilibeth, who rebuilds her world after the emotional freeze of divorce and the climate freeze. The story begins:

In December, the valley cars barely turned over. Batteries died. Blankets were coiled on the sills of frosted windows, tacked over ill-fitting doors. Wood split with the tap of an axe. The ice on the lake was three feet thick, then five, then seven, then the auger froze. When the wind died down, the townsfolk had parties on the lake below the Ledges, the deepest part of the lake, so warmest water, so best fishing. The fish huts all huddled together. The friends built fires in the middle of pallets with brush hauled out in trucks parked behind the huts. The fire was taller than the roofs. It leaned with the wind. They drank hot drinks with gloves, red noses at rims, leaned away from the lick of the flame….”

The miseries of McLean’s characters throughout the collection are also familiar: Lilibeth is recovering from divorce; another woman’s lover won’t leave his wife; a man is obsessed with his high school crush.

Snappy, realistic dialogue further helps the reader relate to Reptile House’s characters and infuses McLean’s epic themes and compressed prose with a welcome humor. As the “The Amazing Discovery…”  approaches the tragic climax, which the story has been promising and threatening, since its opening paragraph—“Mel could get Mike to do anything,” this is the dialogue McLean attributes to the intoxicated soldiers:

“My dad’s in the field by now. He’s fighting with that plow.”

Mike drank the last of the bottle and threw it out onto the sand.

“A nice home for some bug or a mouse,” Mike said.

“They’ll cook in that bottle by noon,” said Mel. “Some friend you are.”

“Jungle men cook bugs and mice from the mud in a bottle,” said Mike.

The cactus gave way to the tires and grill. The cab lunged and weaved through the sand.

Mike and Mel have forced the driver dangerously deep into the desert, nearing the legendary Carlsbad caverns—“the blackest hole you ever saw.” This banter belies the gravity of the situation. They, too, could be cooked by noon under the heat of the desert sun.

McLean’s collection concludes with, and takes its title from, “Reptile House.” When Carl’s wife gives birth to another child, Carl, apathetic in his marriage, goes through the motions of cutting the cord and tending to his wife in the hospital, while fantasizing about zipping “out of his skin,” escaping to another life. That’s when he recalls an incident at the zoo’s Reptile House, when a 12-foot python swallowed whole the second snake in the cage.

To the guys at work he described how the final snake had two tails for a while, one pointing each direction, the gaping mouth in the middle, the brown tail flapping then still. Gulped shorter and shorter until gone. This was odd to see.

The zookeepers had said of the incident: “Unnatural, unprecedented, as far as we know.”

They could just as well be describing this collection.

Chantal Corcoran’s fiction has appeared in The Milo Review, Litro,Monkeybicycle, and Lost Magazine.