It’s our pleasure to bring you new poems by four poets whose work will also appear in an upcoming print issue of The Common. 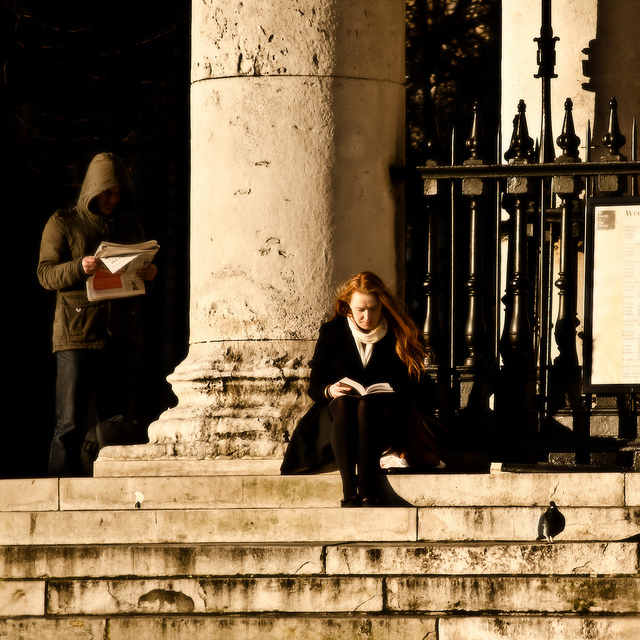 It’s on the outside of the flyscreen door
Catching sun through beige shadecloth,
Rubbing skin on the gridwork of wire,
Its prehensile claws spread and latched:
Their own gravity. Photograph: inside out.

Outside. It has curled into a broken
Light-fitting, snug around a dead globe:
Its neck arched, it pulls in the sun.
Eye on the small entries under
Corrugated iron roofing — snugger
Than body, ribbed profile to be
Squeezed through. Photograph: threshold.

In the photo you hope to find
A hidden truth, something beyond
The naked eye. Honed. Zoomed.
Highlighted. Time to consider.
Though it’s altered in the ‘capture’.
The emphatic pulse in its long neck —
The distant beat of its heart.

But I was there, and memory grips.
Black-headed monitor down from
The roofspace. Rock-climber, arboreal,
Dweller of dark recesses, sun-drinker.

When Bachelard quotes Blanchard saying,
‘Fermez l’espace! Fermez la poche du Kangourou! Il y fait chaud’
We just know his experience is through news reports,
Television, literature, hearsay, zoos and/or tourism.
The same for most, unless they’ve ripped a joey
From the pouch after assassinating its mother.
Or pets on a farm — residue of the hunt — and children
Warming their fingers in the womb-like fold of fur and flesh.
Rediscovering origins in simulacrum. A rough guide. Gestational sensorium.

Or the joey: leaping headfirst into the pouch’s security,
At that age transitional as the sky
With a heat-trough making sudden dark clouds,
Sudden shift in states. The boomer watching over the does
With their spare embryos, milk in their glands.
And the just-left-the-pouch — refused entry now — clinging
To the mob. The future. The boomer obsessed
With the sheath, the close feeling of skin
And moisture, of his flesh within her flesh.

That few minutes of journeying from abdomen to pouch
Is the gradation of warmth. To depart and re-enter,
To shift the threshold and to put thresholds to work.

As a child, I hand-reared a joey — bottle-feeding.
It cherished a sling of blue baby-blanket close to my chest.

The does sheltering beneath the wattles are pregnant.
Always pregnant. Their pouches are universes contracting
And expanding, testing cosmologies we struggle towards.
In this heat the idea of warmth calls for new words.

The moon pends low over the Charles.
Tonight I climb and climb its stairs
reach through rock and root and swale
come to a landing lined with clocks.
Their slow, circling arms could time me,
take me in. Instead they shudder,
ticking off their turns. I haul up
through the stale, unwilling air; would stop,
but start is all and nothing beats the clock.

At last I can be turned in: curtained off
to other sides, to other ends,
in a room that rings and slides
while night ticks back toward day. Tending,
impending, I work and wane,
exchanged. Made strange. It is the dark
out there I want, its cold I crave,
word of the world to reach this place
where life pushes past time
and breath becomes its own bloodied fact.

There is nothing to say. So be it.
Let the sum of that certainty

be the line between you and me,
the beat of my now long-abandoned

heart. Let silence be the last
of this art, let the what-ifs fall
where they may.

A cut above,
a dozen down below and time
and tides beyond—you know,

same old sad old song—
remorseless tune from
a resistant age, and those

Jacquelyn Pope is the author of Watermark.

Thus we reclined in garden chairs, recalling him
Ropeless, on a marble ledge
Snowing climbers’ chalk (look up) on our heads,
And allowed our Solo Monk
Swinging from the porch, from the old turntable,
To swing in the goldener air
In which he scaled, that afternoon, the mountain,
And looked upon the woods
And upon us, his twin sons, in the fleecier shade
Of a curvaceous mango tree—
And never upon our wives talking in the kitchen—
Seeing our struggle to recall
Which kata (languid, sensual) he would perform
Among the copperier clouds,

Instead of leaping, like mother, into nothingness,
Into a heap of marble stones,
So that his kata seemed, in contrast, a little swirl
Of green and purple sleeves
Against her leaving and never again meandering
Through our summer creeks,
While we, before our bedroom windows, waited
And drew and pillow fought
And watched him, at the same moment, stare up—
He thought he could see her—
He told us later that a silver owl had circled him—
And bow to her, on the edge
Of the summit, smeared in the oranges of sunset,
In the liquid sepias of youth,

And thus overpower her absence, her leaving us
Alone, in our brown kitchen,
Seeing him weep (look down) as he slices garlic,
Ignorant of the Monk album
Swinging, likewise, through our solemner home,
And solemnly in the present,
In the redolent summer garden, a rainbow shone
In the arch of each sprinkler,
Which seemed to suit his bowing on the summit,
Our being able to recall him
In the mango-scented air, under an invisible owl,
Making of his imperfect self
(little gut, high cholesterol) a perfect right angle—
A symbol atop the mountain—

Meaning we could step forward, as well as back,
And henceforth set the table
Without her Renoir glass, or fiddle-backed chair,
Even if she dawdled outside,
In our minds, beside the cattails and fluent grass,
Chaining the wiltier flowers,
And all at once we stepped out of the cool shade
And our Solo Monk stopped
And he, against the prisms of cloud-light, began
To descend the marble rock,
To fade, as a dream fades, the instant one wakes,
Though we could sense him
In the hymn of the garden, in the iridescent haze,
Becoming nearer and nearer—

I’m standing beside my hammock, above my sleeping body, which dreams of stumbling along an ever-winding path of leaves and ashes, when a distant, quavering soprano begins to sing—a voice I’d heard, years before, on a bronze hill overlooking the ocean, and ever since regretted not searching for, not hurtling toward her in the rubescent dusk of summer, tearing off my rucksack. “Wake up,” I tell my body, nudging its shoulder with my knee. But it goes on lying there, like an enormous baby in a sling, because it is dying in its sleep: it has collapsed on the dark path, among the scraping leaves, watching my young daughter in her plum-black dress (so like a dream within a dream)

stumble forward in its place. I run my hand over the blond hairs of its forearm, then stare up at the white light through the lemon trees, at my daughter dancing, one rainy evening, before the old projector, the old faces of relatives (contorted, celery-green) streaked across her flannel PJs. So there’s no accounting for this desire to hurtle out into the streets, to find the soprano’s voice, rising again, in the paling distance: art thou a little spirit bearing up a corpse, as Epictetus said, or is the soprano tempting you, like an egret on a thin branch, to leave, to let the body go? My daughter, at the beach with some friends, in the tarantulaic shade of a palm, will no doubt walk, hours later, over the damp grass toward my body, then suddenly freeze in the middle of the yard—

warm and windless and the moon in her salt- hardened hair—noticing a smudge of white, the peak of the nose, above the hammock. Now I’m touching for the last time (as my daughter will, crumpling to her knees) the paper eyelids, the colorless lips, the ill-shaven chin, because I’ve long since dreamt of the soprano silhouetted on an ice floe, of lurching toward her, through rags of swirling snow, burning to see her, to watch her sing. Soon my daughter, as she replaced my body in its dream, will be standing in my place, trying again and again to shape its wooden fingers round her tiny hand, although by then, of course, I will be long gone, loping across the violet sands, searching for the soprano: the quavering voice, the painted mouth.

Get up, schweinerei, my father says, waking us late.
And at dinner, my dyadya, talking drunk and loud,
says that he and my dedushka guarded railroads
in the war. For the Germans. The railroads are old,

but this country is new: not the USSR, I ask?, not
wanting to know. Barely breathing: the world, hard,
atrocious, and cruel, falls into place. And Babushka?
Babushka worked at the railroad, too. (I feel her rough

hands braiding my hair, the stern lips mouthing: zhid).
I remember my mother, seeking salvation at her grave,
saying (but lying): “I once opened a gate.” The world
falls into place. What was on those rails? Who? And

what did their guards do? Somehow I knew, I always knew.
Tonight, I hear my mother’s reedy voice simper, singing,
Nach jeden Dezember ihr kommt ein Mai. Her home of
comfort, gemutlichkeit,without joy. My mother’s love

for the German tongue, how often she said “There were
good Germans, too.” As Ukrainians, save the martyred few,
they were gvardia, collaborators. Did they have a choice?
Starvation in the kolkhoz, bodies lying, dying in the streets,

and only the Germans, said mother, protested Stalin’s rape
and collectivization of the Ukraine. How much victim?
How much volunteer?Did my mama, my papa, my dyadya,
my baba, my dyedushka commit atrocities in the war?

and why? (There was no crematorium in Dora, my mother
lied.) In the face of starvation, of death, of Stalin’s camps,
tell me, you, well-fed and safe, judging me and mine: is there
complicity when there is no choice? (Was there choice?)

The stories, the lacunae, the lies. Now I know why I always felt
like a Jew. O, Adonai, why? Why these origins for me, why no
orisons for me? The dead are dead, but not within me, my
holocaust today, forever my bread.

ABD (Table of Contents for an Imaginary Dissertation)

Larissa Shmailo is editor of the anthology Twenty-first Century Russian Poetry and translates for the Eugene A. Nida Institute of Biblical Scholarship’s History of Bible Translation book series.