For the month of August we are revisiting some of our favorite content from the past year. Publication of new work will resume September 1. 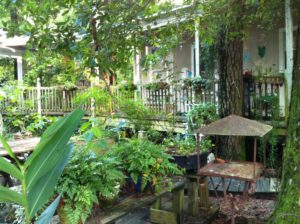 How long have you lived here? My parents grew up here: I drew my first breath across the lake in New Orleans and spent my first six years down the interstate in Slidell before spending the majority of my youth in Pensacola, Florida. So in many ways Covington and the area have existed for me as a sort of imaginative heritage for all my life. Boots on the ground, though, 1.4 years.

Best time of year to visit? Most would say spring, when the flowers are blooming and the temperature is moderate. They would be wrong. Many places can muster floral pomps, but few can summon such a glorious subtropic summer as here. So come at the heart of July, or early August, when the mercury is engorged and the world turns iridescent green. I recommend linen clothes, not out of affectation, but comfort and necessity.

Macro: We stand a lofty six feet above sea level, set in a spearpoint wedge between the Tchefuncte and the Bogue Falaya rivers. Slow waters, though not turbid. Banks overhung with trees and dense-grown vegetation. Downtown is an intimate and, against all odds, thriving couple of blocks of local business.

Micro: The vast majority of my time and observatory powers are spent at home, spying from the porch of the tiny garçonnière my wife and I rent on the property of a wildlife sanctuary-cum-artist’s colony, so the features most striking to my eye lie thereabouts. The property, which we share with various humans and a horde of animals both native and not, is verdant and tropical, bordered by a creek, where, in season, I can hop the fence and gather wild blackberries and that has lately been frequented by a mysterious fiddler. Our raised house has defied a few floods, and its tin roof, which turns rain sonorous, is a frequent if precarious roosting-place for Muscovy ducks.

It is the sport of urbanites to disparage all towns that lie without the city’s umbra as unremarkable, cultureless swaths of strip-malls and conservatism. My New Orleans friends frequently ask: “How can you live up there with all those republicans?” I love New Orleans. I was born there; my people came there with d’Iberville; my new novel takes place entirely within that great city’s bounds. But, Christ, such comments are wearying. And while doubtless St. Tammany Parish votes conservative (and so, in the last decade, Louisiana has swung) Covington is a wonderful islet of artsy weirdness, greenspace, and buy-local attitude without the crass commodification of the same.

So, regardless of stereotypes misaimed, facile, or patently false, I prefer to live in a conflicted, if not downright dissonant state. And, perhaps, Covington’s ability to separate a tolerance for the weird, an appreciation for art, and an abiding interest in local-made foods and drink from political affiliation is a worthwhile thing.

That said, one does find humor in the fact that our local art market is held in the shadow of an enormous statue of Ronald Reagan (the inexplicable donation of a Texas oil mogul). But my New Orleans friends can’t crow too loud when that city’s abundant monuments to the Confederate pantheon more than outdo the (ironically enough, vaguely Soviet-looking) Gipper.

Under European dominion, the area that would become Covington was first part of Spanish West Florida, then the independent Republic of West Florida, later to be annexed by the United States and Louisiana. West Florida, now parsed into the coastal hems of various states, once stretched along the Gulf from the Mississippi north of New Orleans to the Apalachicola, and is where I’ve spent the vast majority my life. Whether in Pensacola, Pascagoula, or here in Covington, there is a detectible kinship and commonality. Call me dreamy, but in all these places I feel acutely the presence of a culture and country that exists in the land and the shared character of its people, and one that differs greatly from the respective states to which it was affixed.

Covington, for that matter, voted not to join the U.S., just as it would later vote not to secede from the Union just before the Civil War. In both cases, obviously, Covington was overruled.

It must be added that Covington was home to the great Walker Percy. So, as any southern writer would have it, there is the sense of forbears looking over one’s shoulders.

Covington is a point of confluence for Louisiana and our corner of the Gulf South. Here the accents and foodways of Anglo-Celtic and African-American southerners mingles with the Creole mélange, along with healthy doses of Cajun, Yat, and all manner of recent immigrants from the New Orleans metro. In terms of both food and speech we are blessed with variety.

Wandering downtown on a certain afternoon, one can smell the peppery tang of crawfish boil, the chilled-sugar miasma of the snowball stand, the toasting loaves at the poboy shop, fish frying at the Catholic girls’ school fundraiser, see menu-boards advertising ropa vieja and black beans or fresh oysters, turn down a sidestreet and find Thai curries simmering…Variety, yes, and in our markets an abiding sense of terroir (though none would use the term). It’s unspeakably pleasurable to be able to affordably buy everything from beer to watermelons produced locally or within the region.

5) Local politics and debates frequently seem to center on. . .

Standard corruption and chicanery. Our most recent election swept in a wave of self-styled reformers who will doubtless morph over time into the very machine the next tide will decry. Also, there has also been a hilarious dustup over the installation of “poetry-boxes,” featuring the work of local scribes, throughout the area. Though this may have been more of an aesthetic than political debate.

The most acute issue at the moment is whether greater St. Tammany (of which Covington is a part) will succeed in banning hydraulic fracking in the area. I’ve been heartened to find the debate nuanced, to whatever extent. Driving downtown I see many bumper stickers and storefronts bearing anti-frack signs. I’ve seen precious little, at least in Covington, to the contrary. Still, none deny the importance of the petrochemical industry to Louisiana and the nation (most of which pays artificially reduced prices for oil and natural gas while states that produce those resources have historically reaped artificially reduced dividends), but there are those of us who would have the means by which such resources are obtained determined not by the state and the industry but the will of the people who would be affected.

We shall see if, in this case, Covington is again overruled.

Kent Wascom is the author of The Blood of Heaven, and Secessia—coming July 2015.