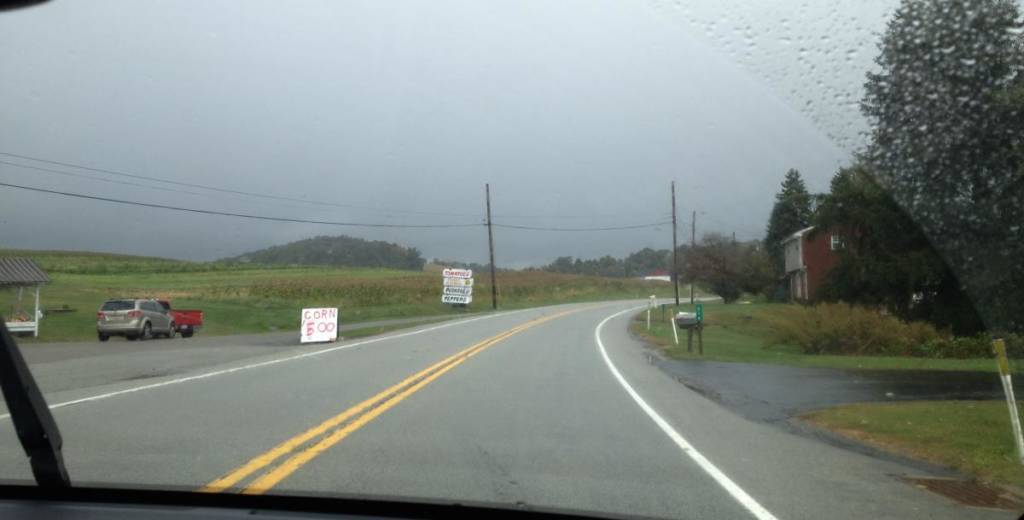 We drive on a gray day in October, a scenic four-hour drive from my new home in Baltimore to my old home in Leechburg, a small steel town in the rolling hills of Western Pennsylvania, where I lived from ages 8 through 15—the longest stretch of childhood I spent in one location. Though it’s a place I’ve often gone back to in my fiction, I haven’t returned in person in over 15 years. The trip is reconnaissance and romance: scene gathering for a novel and a chance to explore my memory with M.

My parents met each other in North Carolina, where my sisters and I were born, and wound up in rural Pennsylvania because my father had just finished seminary in Ohio, and this was where most of the jobs for Lutheran ministers were located. After several years we moved back to North Carolina so that my mother could live closer to her parents and return to a life with what she considered the essentials: a city large enough to have a sewer system, a paid fire department, and home delivery of The New York Times. When my parents speak about Leechburg, it is almost always with fond memories, but they, and my two sisters, haven’t gone back, even one time, to visit. There is little reason, I guess. Without family ties, going back to a town of 2,000 people seems unnecessary and a little like trespassing.

I’m nervous to see through adult eyes what I have spent a long time remembering with the lit emotions of adolescence, and I’m worried that the book I have spent several years trying to write is set in an imaginary place. I have believed for a long time that I grew up in a landscape of beauty and heartache and have attached an almost embarrassing weight to my memories of bright autumn days and abandoned factories, open fields of dead crops lined with hay bales. These are the pure, imprudent emotions of young love, the rush of adolescent sentiment unimpeded by an adult’s self-restraint and judgment, but the nostalgia, I realize, has very little to do with anyone I knew or anything that happened when I lived in Pennsylvania. I was an awkward, spacey teenager who liked daydreaming more than I liked anything else. I had some friends but no love life and spent a fair amount of my time in my own head, staring out the windows of cars and school buses, creating inscrutable art projects in my parents’ basement, practicing the clarinet, and writing abstract emotional journal entries in which I seemed to yearn for some great tragedy that would lend my life a purpose. Living in a rural area gave me an excuse for daydreaming—there was simply not that much to do and a long car ride to get to most places—but there was also something about the landscape itself, its combination of beauty and economic loss, that felt like a public expression of my own inexplicable, overwrought emotions, and I was grateful for this scenery in the way that other teenagers seemed to feel grateful to Nirvana for turning their own fraught adolescent longing into art.

As we drive through hills of farmland, grain silos, and crop cover, mountains of trees just turning red and shaded with the oblong shadows of floating clouds, some of this expansive feeling returns, but I don’t remember the silver industrial windmills or the slew of right-wing political billboards shouting against evolution and in support of big energy and coal. One features a picture of Robert Redford and reminds us that he flies on private jets. Another shows us Yoko Ono and asks, “Would you take energy advice from a woman who broke up the Beatles?”

When we stop for gas, the air is armed with sleet and whipping wind, sky murky with soot-colored clouds, a sharp almost winter-cold that makes us shiver under jackets. We look for restaurants and find a mini-food court inside a gas station that sells orange hunting hats and Christian fiction along with the usual packaged snacks. We buy two hot pretzels glistening with artificial butter, and I wonder if the other people eating lunch are staring at us specifically—the tiny blue car among pick-up trucks, M.’s short angular city haircut—or if this wary scanning gaze is simply how people here regard anyone they don’t know or, maybe, anyone at all.

As we get closer to Leechburg, wooded hills giving way to clustered townships of small houses and auto shops, my memories jostle back, half-formed, and I ask M. to slow down. When we pass through the narrow curve of highway between river and hillside or see the damp pavement of Main Street, shops half-closed by 4:00 PM, the scent of the town’s Laundromat in the air, glimpses of memory flash through me—joyriding with a newly-licensed friend, returning home from swim practice in a neighboring town, hair frozen and hungry, or strategically avoiding certain sides of the street whenever my mother, a legal aid attorney, spotted a man she’d seen on the other side of a courtroom while helping his wife file a restraining order.

We circle through old places, slowly. We see the community park and stop to walk around the narrow strip of storefronts on the main street; we go inside a pharmacy and a small grocery store, largely unchanged, it seems to me, in spite of a new name. The high school looks the way it did when I went there—a large pale brick building, set upon a hill. What I’ve misremembered is mostly limited to minor issues of scale and distance—the township where we lived is farther from the town center than I remembered and the highway closer to my old house; the police station and fire hall are smaller, and the largely empty hills I used to bike over to meet my friend much steeper. I am expecting to see someone who recognizes me from school or from the church where my father worked, and maybe it is this anticipation of welcome that makes the people who I do see seem tired and bothered to be sharing their town. Maybe I am imagining their irritation; it could be the unseasonably cold and dreary weather; or, maybe it is the new wedding venue that has popped up since I’ve left, an old farmhouse, a half mile or so from the red brick parsonage where I grew up, that has been converted into an event venue called Lingrow Farm. The website promises a “magical country setting” not far from Greensburg and Pittsburgh and claims to have been featured on TLC and the wedding website, The Knot. If the locals resent this commodification of their old houses and fields and the influx of outsiders this business must bring into their lives, I understand. I feel vaguely encroached upon by the out-of-town cars and the out-of-place men in tuxes, and I no longer live here.

We spend, maybe, an hour. M. takes me past my old house, which now has a fence in the backyard and a satellite dish. We buy tomatoes at a family-owned farm that been around for almost 100 years; we walk across an aqua truss bridge at the entrance to the town, look down at the shallow muddy river, and take pictures in the cold. Then, though we’ve packed overnight bags, I’m ready to go. It is not that I have been disappointed or surprised by Leechburg but rather the opposite. I am startled by how much of the town looks exactly as I remembered and by how forcefully my dreamy, angsty, teenage emotion rushes back.

I’m sure. I’m afraid I’ve missed something but, suddenly, I’m urgent to leave, as if I’ve just awakened from a happy fading dream and turning away right now will protect me.

Marian Crotty’s writing has appeared in journals such at Third Coast, The Greensboro Review, Confrontation, Michigan Quarterly Revie, and elsewhere.