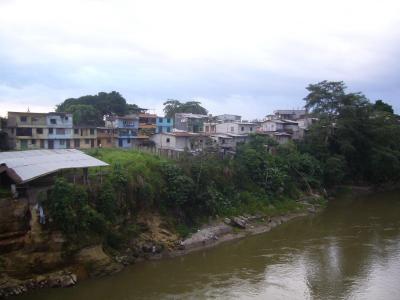 There is an odd half-finished cabana here amidst the spring pastel houses and concrete shacks. From the second floor, iron poles jut out where columns for the roof will go if it is ever finished. (If anyone even contemplates finishing it.) I turn around and look south to the old center of Quinindé. I see the black slums. I’d been warned not to come here alone when I first arrived as a Peace Corps Volunteer. Usually I bring my teenagers from the youth group. They know better than I when it is safe. But now, after living in this small city for two years, I don’t care anymore. The people, I hope, want me here. 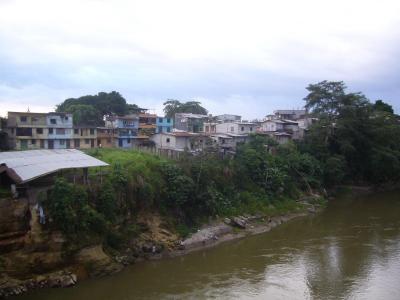 The faint smell of stink wafts up from the river below where children bathe among the rocks, where women sit in the water, forearms bulging from rubbing the faded, torn clothes back and forth; sudsy soap bubbles are carried north with the current. I want to remember what the faint rising of the wind against my cheek before a storm feels like, the way it stops dead before the heavy drops crash down.

A woman stands in a pink doorframe, fat wrist pushed into the side of her hip. She wears lime green tights and roars back laughing as her neighbor mimes the coquetry of her daughter. Bachata and salsa music blare from the windows. My foot taps to the rhythm without my realizing it at first.

A little boy runs naked after a soccer ball, barefoot on the loose black gravel, the leather flaps of the ball tumble half-attached like a paddleboat wheel. Mangy stray dogs huddle in a pack, peering around, scratching at their fleas, too anemic to rise up and chase the boy. I suddenly think of Neyi. She is my favorite tutor at the after-school center where I spend afternoons playing with the children and trying to teach them learning is fun. The past week Ecuadorian colleagues, friends and family have one by one given me goodbye gifts. Neyi and her son stood in line and presented me with a cardboard flower vase decorated with glitter and seashells. She wants to give me something beautiful, she says. Her eyes show shame, I imagine, because she is too poor to afford even the cheap trinkets the others present to me. It is a flower vase that will never hold water. Perhaps it is meant to contain something else.

I look out once more where the two rivers meet. The water flows, paying me no mind. The women washing and the children bathing stop and look at the grey menacing sky. I close my eyes and listen to their voices, a flurry of loud coastal Spanish, caught by the flicker of breeze. I hear laughing and the children kicking up water as they rush toward the shore. The women slap the shirts and garments one final time against the flat wide rocks and then grab the laundry baskets, heavy and dripping with wet clothes. They all dash up the path loud with life as the heavy thick drops begin to rain down.

Geoff Bendeck lives in New York City where he is a MFA candidate in Writing at Sarah Lawrence College.