Today, I am setting boots to snow.  In my hands I hold a pair of shiny new binoculars.  They’re my first new pair since the very first I bought, at age 12, with my $100 of babysitting money.  For twenty years I carried those, and the trusty little things never failed me. These new ones cost a little more, yet even with their bright lenses, I’m thwarted by a golden-crowned kinglet. The tiny bird nips from one branch to the next, too quick to view for more than an instant as it seeks some minuscule source of nourishment among the needles.

Comedian Stephen Fry writes in his unlikely new how-to on formal verse poetry, The Ode Less Traveled, that every discipline has its paraphernalia—its “rules, conventions, techniques, reserved objects, equipment, … time-honored modes, forms, jargon and tradition.”  This paraphernalia, he observes, forms a great part of the pleasure. With gusto he describes the pleasures of the writer:  pen and ink, pencil and paper, iamb and rhyme.

What of the birdwatcher, then?  We aficionados of flitting wings set out with binoculars, spotting scope, and perhaps a dog-eared copy of Sibley’s Guide to Birds, or, for the old-fashioned, Roger Tory Peterson’s Birds of Northeastern United States.  Both books sit comfortably on my shelf, as though confident of their place in my life; and yet slowly, both are being replaced.  These days, I can come home to my iPad and pull up iBird North in a handy app, complete with birdsongs and comparative species at the tap of an icon.  The slender tablet lacks my penciled diagrams of birdsongs and the scribbled life-list I’ve kept since adolescence.  Still, I remind myself – it’s useful.  So I am moving into the 21st century along with everyone else, armed with my 21st century tools.

The woods feel eternal.  But as I tromp among pine and hemlock, oak and ash, even here I breathe in a 21st century air.  Ten years ago, a January afternoon in my native New England might have registered minus 20 Fahrenheit.  Today the thermometer reads a balmy 44.  These intimations of climate change leave me uneasy about the fate of this landscape I’ve known all my life.  My childhood lifted and fell on the rhythms of the natural year.  Leaves ignited in my chest every fall, followed by late November’s austerity, and at last crystalline January, frozen like the Snow Queen’s castle.  After such a winter, the first crocuses felt like Gerda’s kiss, a victory.  This year, like last, the apple trees could flower in an overly warm March, have their blooms killed off by a returning April frost, and leave us without good apple-picking come fall.  And some autumn soon, might the sugar maples, forced to adapt to new conditions, even lose their yearly brilliance?

I turn my thoughts from such brooding.  For now, one thing is unchanged. From under my arm I withdraw a battered notebook.  No iPad can replace this.

The poet carries paper and pen; the birder, binoculars and field guide.  The naturalist brings along all four.  In this book I strive to make an integrated life, binding writing and wandering, observing and pondering, into a single object.

I’m not a good artist – I learned to draw only to be able to record the natural world in front of me.  Drawing teaches you how to see, exhorted the birding magazines I read as a child; you can compare your notes to your field guides to figure out what you spotted.  Sketching also offers me something a camera can’t – time.  When I draw, I take time, and that time, nature’s slow time, is collected forever—absorbed into my memory bank, made part of an inner landscape, stored in the molecules of my mind, and, more, on the lines of the page.

A shrimp in a tidepool emblazons my Seattle notes.  During Seattle’s winters, low tides occur at night, so local naturalists run nature walks to examine the teeming life of the beach.  Invertebrates are light-sensitive and crawl out from their rock hidey-holes at night to forage and to spawn.

I crouched beside the pool to sketch the shrimp, holding my flashlight under my arm.  At first I sketched alone, but the process attracted other beachwalkers.  Soon, one held my flashlight over my notebook; another trained his on the shrimp itself; and I could sketch at my leisure.  What had been a solitary effort became a social event.  Children gathered to watch.  Later, we brought my sketch to the table set up by a nonprofit environmental group, People for Puget Sound.  Page after page of native Northwest shrimp filled their guidebooks.  How could there be so many? With the sketch before us, we managed, eventually, to place our creature.  HUMPBACKED SHRIMP, I added in block letters beside it. 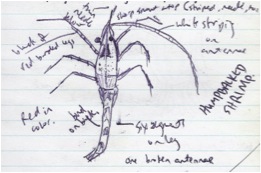 Among all the creatures we found that night – the helmet crabs and the anemones, the sea slugs and the sculpins – I still remember that shrimp best, after all the time I took exploring its contours, striping and speckling with my Write-in-the-Rain pen against the page. 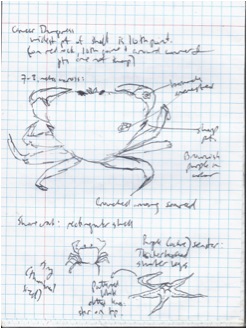 During the days, I watched seabirds.  I remember an eagle harrying a small sea duck known as a Barrow’s goldeneye.  The eagle plunged downward, and the hardy, quick little seabird ducked beneath the waves.  The eagle circled, waiting.  A few moments later, needing air, the goldeneye bobbed to the surface again.  The eagle plunged; the goldeneye dived.  This cycle, repeated, ended at last in favor of the plucky seabird.  The eagle grew bored and flapped heavily away.  I took the moment to draw its intended prey. 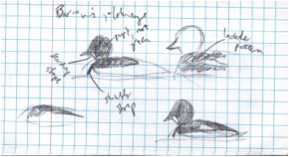 Things didn’t end so favorably for a bird I saw off the cliffs of Deception Pass State Park.  Sitting on the bluff, I spotted a small seagull flitting calmly past.  I trained my binoculars on it, expecting to identify a Bonaparte gull, much smaller than most of its kindred seagulls.

Suddenly a bullet of a dark shape shot into view from the side.  It slammed into the gull, turned mid-air in a perfect hairpin turn, and returned the direction it had come, with the little gull – not much smaller than the predator itself – now limp in its claws.  It had dispatched the gull in one blow.  I’d spotted a falcon – a peregrine, the famously fierce fighter jet of the bird world, known to dive at speeds clocked as high as 240 miles an hour.

At Otis Air Force Base on Cape Cod, I worked for a summer taking water samples for the United States Geological Survey.  My sketches there were hurried, snatched between work hours.  But I recall wide grasslands sprawled between the stands of coastal pitch pine.  Half-deserted roads crisscrossed the landscape.  I remember a summer of golden weeds, of long hours taking water samples, crouched by a wellhead.  I remember turkey vultures teetering low over the grasslands, their huge wings held in their characteristic “V”, rocking crazily on the air currents. 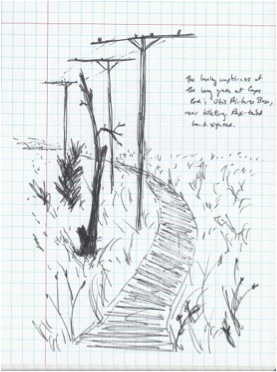 On one or two unusual mornings, too, a flock of crows descended.  Their raucous cries broke me from sleep as certainly as the mockingbird, but with more humor.  Looking out, I could see them circumspectly pacing the yard in front of billeting, black and awkward, like dark clowns.

Michigan.  Farm fields rolled calmly out to every side.  Above these open spaces perched kestrels or red-tailed hawks on the power lines, watching below themselves for mice or voles.

We drove, too, to a heron rookery, to gaze out over the marshland at the heavy nests perched improbably at the tips of thin dead trees. 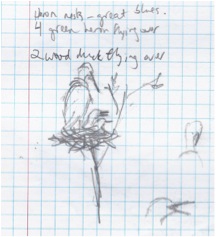 The young herons reached up straggly necks to their slender parents, who arrived in a sweep of wings.  An ungraceful feeding for so beautiful a bird:  the parents vomited up whole fish, slimy with passage through the tracts of the throat.  But their greedy babies gulped the fish down. 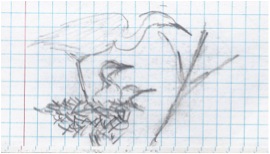 In Michigan another phenomenon stole the attention each fall.  The state lies in the Central Flyway, a great migratory pathway for birds large and small.  Sandhill cranes, for instance, gather in local marshes in massive numbers.  Each fall I traveled with other birders to the Phyllis Haehnle Memorial Audubon Sanctuary marsh, where thousands of cranes arrive each evening.  Birders flock here almost as thickly as the cranes themselves.  Wildlife photographers cluster on a grassy rise overlooking the marsh, one long lens flanking the next like guns from a foxhole.  For a moment all is quiet.  Then, from behind us, up over the low hill, we hear them.  They hoot out a croon as they arrive, and from the marsh in front, the cranes already waiting respond with tooting warbles.  Then the huge birds appear overhead, necks outstretched, so low we hear their wings beating.  A hundred shutter clicks: birders crouch to their cameras with the focus of hunting hounds.  The rest of us strain our necks upward, binoculars glued to our eyes.  A rush of air passes.  The cranes swoop downward onto the marsh.  And then they land, drawing almost to a midair halt, afloat and beating their wings, before setting down one long foot, then the next.  They ruffle their feathers lightly.  Resting-place.

Broadwings arrive in massive kettles each fall just over the border in Canada – groups of hawks as many as 10,000 strong. 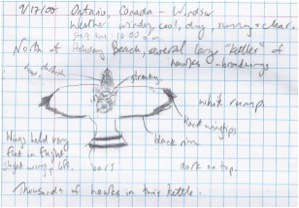 They float across the horizon as numerous as starlings.

New Hampshire, an earlier time.  Low mountains, rounded, with a scatter of trees at their base, rising from a mountain lake.  Yearly, my family and I pilgrimaged to the White Mountains in the fall for leaf-time.  Now I have this record:  the meaty, stolid landscape, mountains impressive not for their height and craggy peaks, but for their steadfastness.  It was a childhood ablaze with autumn color, though those colors I must imagine, for my sketch is in penciled grayscale. 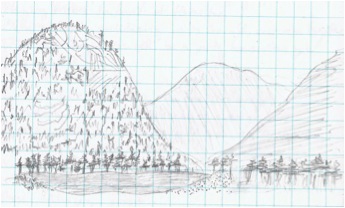 It can be hard to remember that the views and thinking matter of our day to day existence can fascinate as surely as the distant, the tropical, the exotic.  All that time I’ve collected, focusing my attention on a single creature or place, here in this book, is immortal, and returns on me, packing layers of memories into a single glance.  A picture is worth a thousand words, but it’s also worth thousands of minutes: time poured into a particular sketch, but also time that created the atmosphere, the environment, the weather, the travels, the observations, and the feelings of that drawing and that moment.  I look back on these sketches and recapture not only a former sight, but a former age.

Naila Moreira is a lecturer and writing counselor at Smith College in Northampton, Massachusetts.