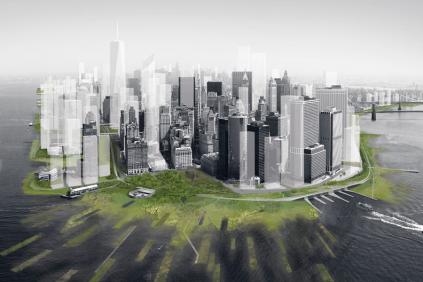 In two sequential hurricane seasons, the Earth has mounted two solid runs at (re)producing the plot of Nathaniel Rich’s Odds Against Tomorrow. It’s good Rich’s second novel found print this spring. After Irene and Sandy, there’s this spooky feeling that it’s only a matter of time before greater disaster strikes.

Since last month’s “Buckminster” examined the literary pleasures of reading certain architectural proposals, I’ll now do a sortie into what architectural ideas might emerge from a work of prose fiction (if any). I’ve been looking forward to Odds Against Tomorrow for a while. During my time working with Architecture Research Office (ARO), we developed several projects that looked at adapting New York City to higher sea levels and more frequent storms over the coming decades. ARO collaborated with engineers, climate scientists, and government officials to study the city’s future. The Museum of Modern Art’s 2010 exhibition Rising Currents: Projects for New York’s Waterfront took its basis from this research. At MoMA, ARO exhibited a proposal to protect Lower Manhattan with a system of soft infrastructure, including absorptive street surfaces and wetland waterfront. As a means of advancing discussion of soft-engineering solutions, ARO had started modeling a fictional hurricane’s impact on the city withThe New York Times graphics department. That was early October 2012, and Hurricane Sandy beat our fiction with fact.

The storm from Odds Against Tomorrow is named Tammy, and it’s a Category 3 in late summer, after a period of bitter drought. “Tammy was worse than anyone could imagine,” Rich writes. “Like all major catastrophes, it surpassed the limits of imagination. And what was human imagination, after all, but the reconfiguration of past events?”

The inundation of New York City is the central event in a novel about fear. The setting is a near future, when a megathrust earthquake has leveled the city of Seattle. Rich’s protagonist is Mitchell Zukor, a financial analyst newly arrived from Kansas City via The University of Chicago. His compulsive calculations of worst-case scenarios put him at the forefront of a start-up futurist consultancy. Mitchell and a junior colleague, another Midwesterner, Jane Epler, travel Manhattan’s executive conference rooms exhorting on risks as obvious as brain cancer from cell phone radiation and as spectacular as a “nanorobot invasion.”

The novel steadily shifts codes. A satire of the financial services industry molts into something more fabular, as it relates to Mitchell’s fascination with a mortally ill classmate, Elsa Brunner, “the Black Star.” A more rigorous disaster survival narrative takes over, culminating with a FEMA camp on Randall’s Island. Rich grooms his different modes to complement each other, and the novel zips forward with a profluence that is at times a little to rapid.

The type of imagery operating at the novel’s conclusion is quite different from what’s in use at its opening. This produces an interesting frame for Mitchell Zukor’s story, but I also found it relevant to think about how we humans write imaginatively about the future.

The novel maneuvers Mitchell through the development of his presentation skills. He performs worst-case scenarios in what seem like flash-fiction slams. He wields statistics, science, and maybe a touch of The History Channel. He invokes the Yellowstone caldera, Sino-American war, the Soviet doomsday device known as PERIMETR, the Azores earthquake-tidal wave, India-Pakistan war. “You’re like an exorcist in reverse,” Mitchell’s boss (one Alec Charnoble) says. As he polishes his “repertoire,” Mitchell begins “to feel that he [is] the information.” His particular genre of performance—half fact, half fiction—is akin to architectural speculation. Vivid, but a little cold for all that color and motion.

But when Mitchell actually sees a real worst-case scenario coming, this prophecy profiteer turns his back on his gift. An extended drought over New York breaks with a series of threatening storms. To better understand what his gut tells him, Mitchell visits the library to examine what surely must be Egbert Ludovicus Viele’s 1865 “Sanitary and Topographical Map of New York.” Everyone who talks about climate change and the city today knows the implication of the so-called Viele Map. Rich writes,

In the days when Times Square was a red maple swamp and St. Mark’s Place a hickory forest populated by hawks and ravens, more than forty brooks and streams covered the island of Manhattan. During high tide, the Lenape Indians could canoe from the East River straight through to the Hudson across what is now Canal Street. His old office at Fitzsimmons Sherman stood over a little body of water called Sunfish Pond…. For all he knew, the pond was still there beneath the Empire State Building….

Mitchell enters into denial. He intellectually recognizes the threat his calculations reveal. Still he cannot accept what’s about to happen. He collapses mid-presentation.

Hurricane Tammy makes landfall. Trapped in Mitchell’s apartment overnight, he and Jane flee in the morning on an art canoe he calls The Psycho. Enough water has covered Manhattan to allow them to paddle from Third Avenue through Grand Central across part of Central Park up to Washington Heights. Mitchell notices the “water was on fire. Low blue flames dance on the surface like floating bowls in a Thai river festival.” Later, once on solid ground, he washes his flood-soiled clothing. Rich writes, “He tore open the microbar of courtesy soap and scrubbed at his shirt, trying not to let the blackening water splash on his naked body…. The stray drops left blue stains on his flesh.” And while in residence in a FEMA trailer on Randall’s Island, he reads a large whiteboard behind the admin desk with water depths posted (“East New York, 5 feet”). Images in Odds Against Tomorrow grow more shockingly precise as the novel advances. 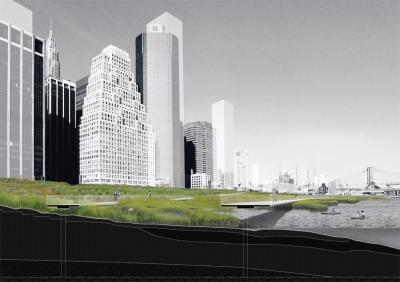 So the novel crosses from foamy speculation into gritty specifics, making Odds Against Tomorrow a climate change Bildungsroman.

In Mitchell’s lifetime as in ours, there is a new normal represented by Hurricane Tammy:

For the long term was upon them. According to the scientists, these would become the presiding conditions. Over the next years and decades, things would not be as they were before. Things would be, for starters, a lot wetter.

Accepting the new terms from our planet takes mental will, just as Mitchell struggles with what he knows. But it’s not enough to know the information, evidently, as we’ve had data on climate change for some time. To establish a more compelling ethical framework for the twenty-first century, new narratives founded on compelling, emotionally available imagery are needed.

To produce such detailing in Odds Against Tomorrow, I wondered if Nathaniel Rich hadn’t transposed the actual impact of Hurricane Katrina on New Orleans over a fictional New York City. Facts from past events used in order to speculate about a future event? Sounds straight out of Mitchell Zukor’s repertoire! But where these images and situations appeared, principally in the chapters called “Sternman” and “FutureDays,” I found Odds Against Tomorrow to be at its most poignant and most memorable.

“Do you think this is just the beginning?” Jane asks Mitchell, on their way to the Randall’s Island FEMA camp.

Each year climate change intrudes further into communities and their economies. Ecologies are already disfigured and will continue to change. Crises are entering our literature, indeed, but what do they mean? The made-for-The History Channel moments in Odds Against Tomorrow make an exciting tale. Mitchell mouths or experiences first-hand all of the “ideas” of urban adaptation to climate change, even working out how his new community out on Flatlands Avenue in Carnarsie survived the storm. (See above, Rising Currents.) I think the significance of Rich’s novel and others like it, such as the empathic West Coast novel The Age of Miraclesby Karen Thompson Walker, comes from their use of literary techniques to measure our changing world in the human scale. From their characters and their fictional experiences, readers learn how to live in this near future. It’s no wonder that in a novel about Mitchell Zukor’s fear of cataclysm, he’s surrounded by a cast of courageous New Yorkers either eager to get back to business or to start all over in Zone V, far out in Brooklyn.

“Our expectations are constantly being surpassed,” Mitchell tells Jane. “The scales need to be recalibrated.”

As our planet changes, societies will necessarily adapt. What’s unclear, though, is if our responses will be motivated by courage or by fear. Perhaps the two could be constructively aligned, as Karen Thompson Walker has suggested? Will New York City erect a sea wall to keep the storms out? Or will humility before nature prevails and the city soften its waterfronts; make its infrastructures more resilient? It would be a great success for our contemporary literature to lead American culture by framing discussions of our near future. Odds Against Tomorrow leads the way.

Who Writes the Arabian Gulf?

NOOR NAGA
I have dreamt of this Arabian Gulf Portfolio ever since I was a teenager, writing about snow and squirrels and picket fences—despite living in Dubai where I had more experience with temperatures of 40+ degrees, karak chai, compounds… Because English was my first language...

Oman Is Mars: An Alien All Along

PRIYANKA SACHETI
The first time my husband visited me in Oman years ago, he peered down from the plane window and received his first glimpse of the landscape: an undulating palette of browns, beige, mauve, and grays. This is Mars, he thought to himself. Mars on Earth.