When I’m there I never think about Mr. Sam O. Dale, an eight term state representative for whom this site was named.  Actually, I’ve never heard anyone call this 194 acre lake anything other than Johnsonville Lake, that being the nearest town.  I’m not sure if this is because in southern Illinois there seems to be a common disdain for politicians or if it’s just that Johnsonville Lake seems like a more fitting moniker.  All I know is this Sam Dale guy never crosses my mind.  Usually I’m trying to stay focused on the subject at hand, be that catfishing, building a campfire, or trying to land a nice rainbow at the trout pond.  Regardless, when my mind does wander, and it often does, especially while I’m waiting for a fish to bite, I often find myself thinking about my grandpa Dutch Hale who drove down from Clay County to fish here.

The initial 40 acre tract of land was purchased in 1959, though now 1,302 acres make up this wildlife area.  But to me, the lake history involves fishing with Grandpa at the trout pond on the opening day of season, fishermen elbow to elbow.  Five was the limit, but when Grandpa took that fifth rainbow trout off my hook, he slid it into my boot and said, “We’ll just hide this’n in here, then we can stay and fish a while longer.”

That was my first bootleg trout. 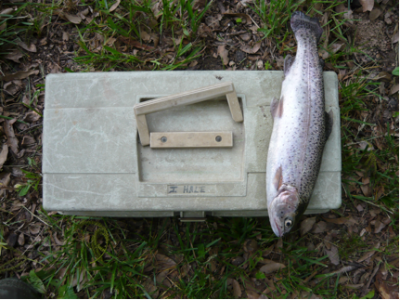 Grandpa Dutch fished constantly and once held the record for the largest crappie ever taken out of the main lake at Johnsonville.  I don’t remember exactly how big it was but for several years a picture of him holding the fish hung on the wall of the bait-shop.  Of course years later, when new management took over, that photo disappeared.

Grandpa raised mealworms in a cardboard barrel in his basement and had a horse-tank full of minnows out by his barn, but I’ve actually seen him catch fish on a bare hook.  We’d been hauling in bluegill after bluegill when he said, “Let’s take a break and eat some of this chicken your grandma fried up for us.”  So we sat there in his boat, quietly eating and gazing out across that water.  Just taking it all in.  At one point he flicked a bit of chicken into the lake and a fish hit it.  “We probably don’t even need any bait,” he said, casually flipping his empty hook out a mere ten feet or so, and sure enough he had to set down his chicken leg and reel in another bluegill.

There are several great fishing spots all around Johnsonville Lake which I will not divulge here or anywhere even under threat of torture.  But I will say I have had some great times staying up all night catfishing from the bank by lantern light.  As a kid with my dad, then later with my friends, and of course with my black lab Ethyl, who was as good a fishing buddy a guy could ask for.

One morning when I’d gotten rained out at work, Ethyl and I fished from the timber-lined shore at one of my favorite spots on the lake, and during a severe thunderstorm we quickly caught six nice channel cat, the limit at Sam Dale.  We were both so drenched I threw an old tarp over my truck seat for us to sit on as we drove home.

There’s even good fishing around the tent camping area at Sassafras Point and a few good places over at Hickory Hollow where the RVs and camper-trailers park, and that is where in 1982, after setting up his camper, Grandpa Dutch fell over dead with a heart attack.  There is a fish engraved on his tombstone.

Although I fish quite often I hadn’t trout fished much since I was a kid, but then last spring I traveled to Shelbyville to crappie fish with my uncle.  The lake there was so rough and choppy that day we decided to try for some trout at the pond in Sullivan instead, and that’s all it took to get me back into it.  Last fall, I made several pilgrimages to Johnsonville Lake where I caught my limit of rainbow trout almost every time.

This spring my buddy Tony Gibbons and I met there for opening day of trout season, and though it wasn’t elbow to elbow like it once had been (which was fine with us), there were several there fishing with store-bought baits and tiny lures and whatever else they thought might entice a trout.

As everyone around us caught small fish, I landed a seventeen inch rainbow.  Then Tony caught three nice ones in three casts throwing a rooster-tail.  After he caught his limit he said, “I should’ve brought my grandson—we could’a stuck a couple in his boots, huh?”

Heading back around to the parking lot, we ran into a few local fishermen we knew, mostly old men from Clay County who had once known my granddad.  They all bragged up the fish in our baskets, which were much larger than any they had.  And of course our good fishing spot didn’t stay uninhabited for long.

Unfortunately, during one of my last trips to the lake the handle on Grandpa’s tackle box broke.  He had used that tackle box for about ten years before he died, and I have used it for the thirty years since.  Rather than buy a new one, I will probably just fix the handle and continue to carry it with me.