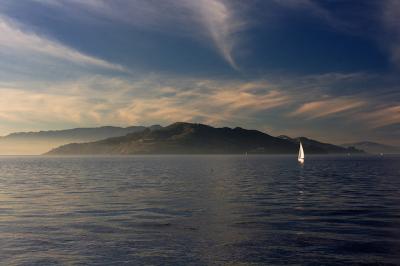 The ocean encircles a lone peak.

There are few birds flying over the cold hills.

In the first half of the twentieth century, a Chinese immigrant carved this poem on the wooden walls of the Angel Island Immigration Station in the San Francisco Bay. It was unsigned, one of many.

From 1910 to 1940, Angel Island served as the main port of entry on the West Coast, as Ellis Island did in the New York Harbor. Under the 1882 Chinese Exclusion Act, people of Chinese descent could not immigrate unless they already had immediate family in the country. On Angel Island, officers questioned them and their families on the minutiae of private life, from family trees and village layouts to daily meals and the material of the living room floor. If their stories matched, the immigrant could get off the island and onto the continent. If the details differed, the immigrant would be deported. They could appeal, and many did, and they would wait on the island for months and even years for their hearings.

Many Chinese had borrowed money or depleted their families’ savings for the journey. In their eyes, America was the land of opportunity. Failing the interrogations meant failing their families, and some committed suicide instead of returning to China in shame. Others vented their frustrations by writing on the walls. Most modeled their verses after classical Chinese poetry; the language is lyrical, indirect, and spare. The images span from hometowns to the Angel Island seascape; from Confucius to Napoleon. The poets treated the horizontal wooden panels as lines in a notebook; they first brushed one character onto each panel and then carved the fluid strokes into the wood. The poems read vertically from right to left, without titles; where one ends the next begins.

The day before I came to Angel Island I walked the coast of Point Reyes with some friends. Point Reyes is a cape just north of San Francisco. It juts into the sea like a hook. The lighthouse at its westernmost point used to warn ships sailing from the San Francisco Bay of their proximities to the coast. Sometimes the fog was so thick that the sailors could not see the flashing lights, and on these days, the lighthouse would sound a fog horn. Ships would wreck on the rocky coast. The lighthouse sent men to walk the beaches on the lookout for ships, and while they could not send final warnings, they could respond to crews that found themselves in the cold Pacific waters.

At Point Reyes we looked out at the pale blue sea. We walked on the cliffs overlooking the water and up grassy hills full of stinging nettles and poison oak. On the ridge was a forest of Douglas fir, the trees dark giants that reached into the sky and trapped the fog. The fog dripped like very light rain and turned the trail into a mud bath. The mud rose and fell with each footstep. I wondered why all four of the guys tiptoed at the edge of the trail. They wondered why I walked through the mud, until Matt pointed out my waterproof boots. Ryan, the only one of us who could conceivably swim from Alcatraz to shore, grabbed a handful of stinging nettles while trying to circumvent the mud. Outside the forest, the ground was dry, and in a distant valley the fog parted to reveal the golden hills.

A coast is where land meets water; they form natural borders. Here tides rise and inundate beaches or recede to reveal sandbars. Waves erode headlands and reshape bays and beaches. The law differentiates an immigrant from a citizen, but like the coast, laws can change, with our beliefs, with our sense of justice or irrational fears. At Point Reyes, the coast changed with each footstep we took. In the span of our long walk, we passed sandy cliffs, luxurious poison oak, muddy forests, pale green shrubs, golden hills. From these cold cliffs, the sea appeared as a vision of the infinite, the gaze taken to the fog in the sky.

The day after I went to Angel Island I walked from Fisherman’s Wharf to the Golden Gate Bridge. The coast that is bliss is also a military fort. Fort Mason was built during the Civil War to defend the city against the Confederacy; it is unlikely a gun was fired from here, given its nautical distance from the South. The Army continued to use it as a staging and discharge area for troops in the Spanish-American War, the Indian campaigns, and the First World War. It was expanded during the Second World War to serve the Pacific theater. Next to Fort Mason is Marina Green, a wealthy neighborhood complete with yacht clubs, built on landfill from the 1906 earthquake. The land liquefied in the 1989 Loma Prieta quake and the buildings collapsed, but the rich rebuilt for the views of the sea.

Down the coast is Crissy Field, an old airfield and the landing strip for the early transcontinental flights. In the late nineteenth century, the railroads shrank the continent from months in wagons to weeks in cabins. These flights covered New York to San Francisco in days. In 1920, the first such flight landed at Crissy Field after thirty-four hours in the air and seventy-five hours after its departure from New York. Four years later, the first dawn to dusk transcontinental flight landed at Crissy Field and collapsed continental travel into a day. Crissy Field closed in 1974, the military bases in the 1990s, the land now restored as tidal wetlands and sand dunes. At an estuary I saw seabirds walking on the marshes. Dune grasses crept on the sand. The shrubs bloomed dots of pink and lavender. Beyond the bridge I glimpsed the sea again.

The Angel Island coast ruffles into headlands and coves like skirts. It was a national border, and like most borders, it remained porous. The 1906 earthquake destroyed many records, and in the absence of documents, many Chinese men could claim unrelated persons as family. A system of paper sons emerged in the Chinese community. For a fee, a man would sponsor unrelated men as his sons. Brokers drew up coaching papers, small booklets of fictitious family histories to tell the immigration officers. The paper sons memorized the minutiae during the voyage and tossed the papers into the sea before they arrived on the island. The immigration officers knew the ruse, but they had to prove familial ties without reliable documents, matching the details of family life instead, this minutiae thought of as definite rather than the fluid terrains of blood and emotions. Ironically, the paper sons who had to invent their families learned the stories well and were more likely to pass the interviews. The real sons, more secure in their sense of family, sometimes faltered, especially if the rice bin had been moved after the father left home.

The morning I came to Angel Island, the fog hung low on the bay. Waves rolled up the sliver of beach near the barracks and spread across the sand like knuckles. I came with my friend Lin Lin, who was soon to be sworn in as an American citizen. Though the island lies in neither of our personal histories, as immigrants and women of Chinese descent, we wanted to see the poems. The authors left the poems to decay in the wood, and they would have vanished had a park ranger not spotted them before the buildings were slated for demolition. Though the buildings are now protected as a part of the Angel Island State Park, most of the poems, neglected and exposed for decades, have already faded into the wood.

In the 1930s, two detainees copied down poems and carried them to the Chinese community in San Francisco when they landed. In 1980, Him Mark Lai, Judy Yung, and Genny Lim, whose parents spent time on Angel Island, published an anthology of translations and oral histories titled Island: Poetry and History of Chinese Immigrants on Angel Island, 1910 – 1940. Unlike the fading words on the walls, this anthology seeks to preserve and interpret the poems. It renders them in their cultural and historical context even as it removes them from their setting. These are the poems I read at home in Denver, far from the San Francisco Bay.

The Chinese language remains inscrutable to me, even though I studied it for twelve years. In the men’s barracks I recognized the stray Chinese words on the walls, a character or two still legible from the poems. The rest have become crevices in the wood. These walls voice an experience that has been kept silent. In imperial China, it was a crime to write unofficial histories, and travelers inscribed subversive thoughts, usually as verse, on trees and snow and boards at stops and inns. Likewise, the walls of the Angel Island barracks became a space for the detainees to chronicle their journeys to America. Two whole poems are still visible. I could not read them, but I felt their rhythm and intonation. In translation one of them begins:

In the quiet of the night; I heard, faintly, the whistling of wind.

The forms and shadows saddened me; upon seeing the landscape, I composed a poem.

The floating clouds, the fog, darken the sky.

At Point Reyes we reached Alamere Falls, which plunged off the cliffs into the sea. Matt and Nalin had walked ahead and when I caught up with them, they stood on the dry bed of the falls, saying, “I thought with all that water we had on the ridge, we would see a huge waterfall!” Alamere Creek had shrunk to its narrowest channel and flickered down the cliff. We climbed down a sandy bluff to the beach. I walked out to the sea, my feet still dry in my boots. Alamere Falls pooled behind me, feeding the ever-shifting coast.

Teow Lim Goh is a writer and critic in Boulder, Colorado.