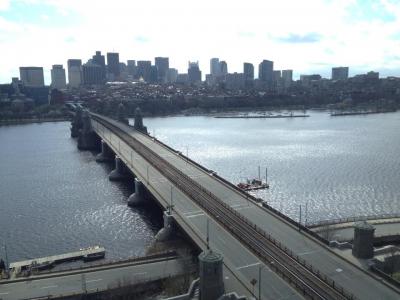 Two weeks ago today, I woke up reading an email that Watertown was closed. The Boston, Cambridge, and Watertown police departments had sealed a perimeter. No entrance, no exit. The office was closed. I had started working for a landscape architecture practice in Watertown that Monday, the morning of the Marathon. After three months on the city’s outskirts, writing full-time, at last I had started traveling around Boston and Cambridge. The Lockdown froze the city in its novelty for me. 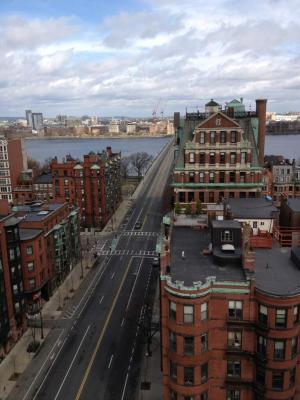 I followed the news into the morning. All modes of the Massachusetts Bay Transportation Authority in all areas of service had closed. The citywide order to shelter in place came up on Twitter. My wife and I watched an hour of TV before the information began to recycle. I used the free morning to look again at an incomplete short fiction of mine involving an airport that has been preserved as a kind of park—after the end of commercial air travel.

Sirens ran in the distance. But no cars moved through my window. No pedestrians until after one o’clock, when neighborhood dogs brought their owners into the street. I checked the TV again around three: nothing new. Then we escaped. At the end of our street is a stone gate into the Arnold Arboretum, an Olmsted park around two hills with views of the Boston skyline. The Arboretum was busier than I’d ever seen it. Long white and violet petals dropped from the magnolias we passed on our way up Peters Hill. There was a crowd on top of the hill. Two people were on cell phones. A guy with a digital camera filmed the city in the distance. Perhaps the events in Watertown, invisible from here, made this view worthy of documentation.

A woman downhill turned cartwheels, two or three at a time. She must be a dancer, my wife said. Behind the trees, to see if my muscles remembered, I tried cartwheels of my own, one at a time.

“The ability to go virtually anywhere at any time is the core of the urban experience,” observes New York Magazine architecture critic Justin Davidson. “A marathon is, among other things, a proud demonstration of joyous movement through safe city streets, and the bombing was an attack on that basic freedom.”

Three separate actions comprised the April 19 Boston Lockdown: the police action in Watertown itself, with the National Guard rolling around in armored cars and thermographic cameras on helicopters overhead; switching off the MBTA; and the order to shelter in place, which residents received and enacted until mid-afternoon on Friday. The capture of Dzokhar Tsarnaev made the Watertown police adventure a success, though it required the capitulation of millions across an entire region. Had Dzokhar escaped, how would it be remembered?

We can talk about the Lockdown in the first-person plural. The unifying medium of the built environment and the infrastructure into which we—all of us in the metropolitan region—expect to plug-in daily, the April 19 Lockdown was a shared spatial experience. While there are many different cultural identities within Boston, we are all constituents (or clients) of the city’s resources.

My wife is teaching her fourth graders in Beacon Hill about civilizations this year, and now they’ve focused on Classical Greece. The class has constructed a big model of a fictional city-state dedicated to the goddess Artemis. Construction began on civic buildings and surrounding landscape where forests, mines, and rivers feed their economy. In The Architecture of the City, the marvelous Aldo Rossi writes of the difference between the city-states of the Peloponnese, and all other cities of the ancient world:

“The cities of the Orient made walls and gates their res sacra, the constituting and primary elements of the city; the palaces and temples within the city walls were in turn encircled by other walls, like a series of successive enclosures and fortifications. This same principle of boundaries was transmitted to the Etruscan and Roman civilizations. But the Greek city did not have any sacred limits; it was a place and a nation, the abode of its citizens and thus of their activities. At its origin was not the will of a sovereign but a relationship with nature which took the form of a myth.”

From the perspective of Classical Greece, Athens is the physical artifact of a belief system connecting the individual to the community to the land and beyond to the gods. The city mediates between you and the Universe. Through public life, individuals are connected to each other, to past generations, and to future descendants. Everything fits.

Imagine some version of this continuum exists today between our cities and ourselves. Boston closes to conduct a manhunt for terrorists. We shut down New York before a hurricane. And this is just the news above the fold. An electrical grid inexplicably goes dark. Bridges collapse. Highways crumble. Oil spills. Algae blooms. Supertornados, superdroughts. Foreclosures. Given the current state of our built environment and the ecology that surrounds us, what does it say about us? About the universe?

A twenty-first century literature of place and place-making has got to include the discontinuous city. We will become only more familiar with it over coming years, in the U.S. and abroad. This discontinuity creates an important premise condition for the architecture and engineering that will eventually make our twenty-first century civilization more sustainable and resilient.

It would be interesting to examine how an architecture studio and a writing workshop might work separately engage discontinuity. I’ll look to that next.