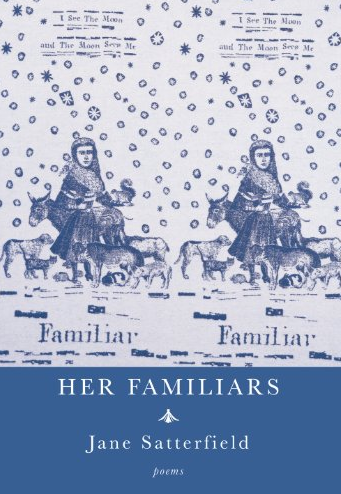 Throughout her impressive body of work, which includes three collections of poetry and a memoir, Jane Satterfield explores the roles of place and gender in human identity. Born in England and raised in America, she probes what it means to reconcile the legacies of intertwined lineages. Satterfield complicates her inquiry into cultural inheritance by emphasizing female experience. In her first poetry book, Shepherdess with an Automatic, she described her youthful adventures during the 1980s; “going to clubs” in “boots with zip-laces to accelerate the kill” (in contrast to1950s housewives “decked out” like “living dolls”). Her Familiars, Satterfield’s most recent collection, takes us further back in time, to the 1970s. We glimpse her as a girl scout, part of a “troop of girls kitted out in jumpers, cable knee socks, & small green berets,” living “blissful on suburban streets” while “choppers stuttered over Saigon.” Both books, as well as her second poetry collection Assignation at Vanishing Point, combine coming-of-age material with adulthood examinations of love, sex, child rearing, historical influence, and literary ambition. In Her Familiars, Satterfield widens her range of subject matter, tones, and aesthetic approaches, mining the territory between domestic and public life in striking new ways.

Several poems in Her Familiars, such as “The Water-Cure” and “Endsville,” demonstrate Satterfield’s passion for formal restriction. The technical dexterity on display in Her Familiars surpasses even that of her accomplished earlier work.  In “The Water-Cure,” Satterfield makes deft use of the pantoum form, a fixed verse form that contains a pattern of repeated lines, to look at the shifting meanings within political and military discourse. Phrases like “repugnant but not unlawful,” from former Attorney General Michael Mukasey’s 2008 assertion about waterboarding, take on new nuances as they recur. “The Water-Cure” finds a powerful formal vehicle for exploring the disparity between official language (“enhanced interrogation techniques”) and the reality of prisoners “pushed under water” and then “raised, hair wet, gasping for breath.”

In “Endsville,” Satterfield enters the world of The Grim Adventures of Billy and Mandy, a popular American cartoon series in which the Grim Reaper finds himself stuck in a suburban town called Endsville. As a sestina, “Endsville” possesses a fixed number of stanzas and lines per stanza, with line-endings rotating in a set pattern. Satterfield’s artful repetitions capture the Grim Reaper’s listlessness in a humorous and slightly haunting manner. The outlandish premise of the Grim Reaper trapped in a suburban lifestyle amuses – “A fiend like me could go mad in Endsville / which has, by the way, no chapter of Skull -/and -Bones to fill my social time” – and invites us to see a resonance with the stuckness that might sometimes pervade our own lives.

“…let me beg off or bag out,
leave you to enjoy lingerie, laughter &
other “enhancements.” Let me plead –
not my belly – but my carbon footprint –.
Just this once let me stay home and douse
my dry, damaged, chemically treated hair or
husband with community-traded honey.”

The poem pokes fun at both the highly marketed culture of femininity that produces “For Your Pleasure Parties” and the counter-cultural but equally aggressively marketing that encourages females to buy products like “community-traded honey.” Satterfield’s wry tenor highlights the sacrifices in either approach to womanhood; in the hip paradigm of “For Your Pleasure Parties,” one risks inauthenticity, while the “community-traded honey” alternative might mean failing at conventional markers of female attractiveness. The humorous image of Satterfield dousing her husband in organic honey (in contrast to the more stereotypically “sexy” body-dousing substances likely found at a “For Your Pleasure Party”) emphasizes the absurdity of commercialized femininity.

More than in her previous poetry collections, Satterfield focuses on contemporary popular culture. She examines “the peeling pages of skin mags” plastered on a public bathroom wall, the travails of the lead female character in The X-Files, FBI Agent Dana Scully (a grown-up version of a “good girl scout” who learns “how far the smart girl gets”), and the “frat boy lingo” used in logos like “Save the Ta-Ta’s” on t-shirts intended to raise money for breast cancer. In the poem “American Idol,” Satterfield considers what it means to keep her “image up” in a society where reality TV heightens comparisons between on-screen females like Victoria Beckham (aka Posh Spice) and regular women. Satterfield’s hair stylist encourages her to cut her hair like Beckham: “With a knockout figure like mine, the stylist says, / angling for a better tip, I, too could sport / a posh bob, I could go that blonde.”

The stylist angling “for a better tip,” flattering Satterfield and attempting to sell her physical improvement, captures a core interest of Her Familiars: the influence of market forces on female lives. The collection’s title piece, “Her Familiars,” moves between the present and the past, inviting us to see connections that we might not have previously considered. Satterfield observes her thirteen-year-old daughter reading a book that details the shopping adventures of a group of beautiful and fashion-savvy girls known as “the Pretty Committee.” She describes a radio ad for a “mommy makeover,” then jumps back in time to witch hunting practices during the English Civil War. Satterfield observes that physical “oddness” (the same flaw the Pretty Committee girls and women who seek a “mommy make-over” want to avoid) was grounds to suspect someone of witchcraft. The poem ends with a description of the infamous English witch-hunter Matthew Hopkins:

“…Hopkins, the self-appointed
Witch-finder General, bearer of
needles & bodkins, Puritan
cloak & cape, the best accessories
of his time. The feeble, the poor, &
otherwise unpopular didn’t
stand a chance. From fees
charged to the estates of the accused
he made a not unpretty profit.”

Like the Pretty Committee, Hopkins dons the “best accessories of his time.” The “unpopular” don’t “stand a chance” against him. By emphasizing these subtle likenesses between Hopkins and the Pretty Committee girls, Satterfield highlights how social power structures over the ages have denigrated women who fail to meet “the pressures of fashion.” She aims not to equate the horrors of witch-hunting to the pitfalls of modern female-centered marketing, but to explore how different figures through time have exacted a “not unpretty profit” – social or monetary—from women’s looks.

On occasion, Satterfield’s poems lose some of their subtlety when she directly states what’s implied. In “One Kind of Purgatory,” she describes the constantly replayed media images of Princess Diana. Satterfield uses the repetitions of the villanelle form (a nineteen-line form that contains two repeating rhymes and two refrains) to capture the public fascination with Diana’s life and tragic death. The poem also evokes Diana’s role in courting the attention she received. At the end of the first, third, and fourth stanzas, Satterfield repeats the following question: “What is the camera looking for?” She alters the question in the final line of the last stanza, asking: “What is the camera – what are we – looking for?” Since “One Kind of Purgatory” already implicates us, as viewers, in the media’s obsession with Diana, Satterfield’s addition of “what are we” diminishes the effect of an otherwise powerful poem

Satterfield’s intense engagement with political and military matters marks a central difference between Her Familiars and her previous collections. In “Soldierization,” Satterfield traverses military history (an excerpt from English World War I poet Wilfred Owen’s letters appears amidst descriptions of modern assault rifles) while exploring the experience of women in the military. She ventriloquizes and interrogates doubts about female soldiers’ capabilities: “A woman can drive a tank across a desert, but what happens when sand shifts, kicks up & dummies the gear?” Elsewhere, Satterfield confronts the remove that many Americans feel from conflicts around the world. In “The War Years,” the speaker describes “walking street fairs / off Times Square” and listening to “upbeat hip hop / spooled on a soundtrack” while war rages overseas. The speaker of “Bombing: Pet Bazaar, Baghdad” sits with her fellow patrons in “coffee shop quiet” as the “mute loop of CNN” flashes news on the TV screen.

Satterfield’s most ambitious examination of political forces occurs in the long poem that anchors the collection, “Collapse: A Fugue.” She shines as a poet when drawing unique parallels across the centuries, placing surprising details in relation to each other so that her poems achieve a densely layered complexity. In “Collapse: A Fugue,” she highlights similarities between hierarchies in a variety of scenarios: the collapse of the Eastern Settlement in Greenland, the struggles of early American colonists, the disappearance of bee colonies in contemporary society, and the “scorched earth tactics” the English used against the Irish in the late sixteenth century. Satterfield yokes these topics by modeling the form of “Collapse: A Fugue” on the iTunes party shuffle function. The poem begins by establishing its structural approach:

music played and cycled
back into rotation…”

The iTunes party shuffle pulls songs at random from an iPod owner’s music collection so that at one moment a troubadour ballad might play, and the next, a song by the punk band Fugazi. Satterfield moves from the iTunes party shuffle to five vivid historical vignettes. She interweaves the material in these sections the way an iPod on shuffle juxtaposes songs. By making the poem’s structure mimetic of the shuffle feature, Satterfield finds an innovative and au courant form for exploring the way that historical knowledge, in our information-saturated culture, often functions as a “mash-up:”

“…Polyphonic, the mind &
its many trails. Possible, then,

to track them all? The possibilities’
exquisite range? Mind
as mash-up. No – as landscape. Or history
as mash-up, ground we walk &
everywhere – graves.”

Throughout the poem, Satterfield probes the lasting impact of decisions made by those in power, whether the leaders of the Jamestown colonists, the tithe-collecting Bishops in Greenland’s Eastern Settlement, or contemporary politicians who failed to make environmental policies that might have prevented the bee population’s collapse. For Satterfield, confronting the losses of history – “everywhere – graves” – can simultaneously reveal how little human behavior changes over time and help us envision a future in which we can avoid shuffling the same mistakes “back into rotation.”

In “Clarice Cliff Considers Leaving Edwards Street,” Satterfield writes about ceramic artist Clarice Cliff’s creative development. Cliff practices her craft for years so that she can “steady the hand / that learns the slight stroke it takes / to make a petal blush.” She longs to not just create flat depictions of roses but to fully animate her subjects. Her Familiars shows Satterfield’s own artistic progress as she builds on the considerable strengths of her previous books. In the poems of Her Familiars, we watch Satterfield further “steady” the skilled hand that has already given us a memorable body of work.