In 1453, when the Ottoman Empire captured Constantinople, Sultan Mehmed II ordered some changes to the city’s eastern Orthodox cathedral, the Hagia Sophia: the altar was swapped out for a minbar, the platform from which the imam addresses the congregation; and four slender minarets were added, among other things. For nearly 500 years the Hagia Sophia was a mosque, becoming, in 1931, a secular museum that enchantingly reveals layers of religious history, art, and architecture.  Today the purple porphyry marble from Egypt glows richly; the Byzantine golden dome displays Islamic geometric adornments; and mosaics of the Virgin Mary sparkle up high. To better show off its wonders, the museum’s upper gallery hosts a permanent exhibition of images by Turkish architectural photographer Ahmet Ertug. In these carefully lit photos, the tiny tiles of the Virgin’s face and robes can be easily discerned. A museum within the museum. 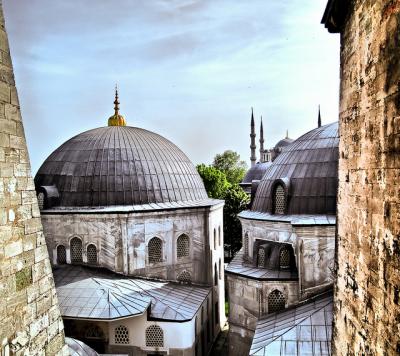 Every historical monument carries a different story of when and how it was preserved for the public, and the tales of discovery and excavation are sometimes more compelling than the at-last revealed element. The uncovering, three years ago, of a seraphim’s face in Hagia Sophia’s central dome was reported in The Huffington Post and elsewhere. The face is lovely, but the value of its discovery is historical not aesthetic.

Down the street from the Hagia Sophia (called Ayasofya in Turkish) are the unremarkable stacked stone drums of Constantine’s Column, repeatedly reinforced with metal rings since its construction in AD 330. One guidebook says, “Although what is left is relatively unimpressive, it has been carefully preserved.” Relics supposedly entombed at the base include the axe Noah used to build his arc and bread crumbs from the loaves Christ fed the masses.

Places like Hagia Sophia that mark the erection and destruction of empires and cultures make one think about the act of historical preservation: the decision to uphold and investigate the achievements of the past.  In modern times, we have come to fear the loss of such monuments and archives. Severance with past knowledge and culture—even the most basic tools of survival—is a key feature of some important apocalyptic literature. In both David Mitchell’s novel Cloud Atlas (the movie will be released this week) and the movie Quest for Fire, there’s a terrifying period in which those who remain no longer know how to make fire. At the close of Ray Bradbury’s Fahrenheit 451, a small band of exiles whose crime was the possession of books discuss who among them have committed to memory which great texts and can, for a while at least, keep them alive.

A couple weeks ago, Istanbul hosted its fourth Tanpinar Literature Festival, the theme of which was “City and Fear.” More than 60 writers from 22 countries participated, including Scottish mystery writer Ian Rankin and Israeli Etgar Keret. Of particular interest to me, pertaining to preservation but not obviously to fear, were the  “Manchester Letters,” an online correspondence between two young female writers: Nermin Yildirm, who’s Turkish, and Jenn Ashworth, who is British. They write invitingly about their daily lives, creative processes, and of the role of travel in their work. Nermin loves visiting real places inhabited by beloved fictional characters: “The moment I breathe in the air, I feel as if I’m gliding through the opening pages of novels which have left their marks on my soul.” 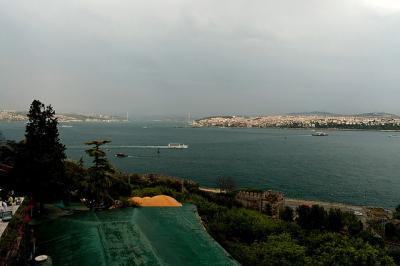 Speaking more generally to literary life on the Bosphorus, the narrow strait connecting the Black Sea in the north and the inland Sea of Marmara in the south, and thereby dividing the European side of Istanbul from its Asian half, is Nancy Milford’s evocative and idiosyncratic article about a literary conference at Bogaziçi University and a subsequent conversation with Elif Shafak, bestselling author of The Bastard of Istanbul, whose book-jacket photo has been publicly burned. An interview with the now famous Shafak, as well as one with Turkish Prime Minister Recep Tayyip Erdoğan, appear in the brand-new literary magazine The Istanbul Review, whose first issue was released this summer.

No mention of literary Istanbul can go without including the Nobel Prize-winning figure of Orhan Pamuk, whose memoir of the city has launched the new-this-fall walking tour “Orhan Pamuk’s Istanbul.” Operated by Context Travel, an international network of archeologists, historians, and archeologists whose walking “seminars” are “designed to help the erudite traveler appreciate and defend the city without overrunning it,” takes travelers through Pamuk’s childhood neighborhoods of Cukurcuma and Nisantasi and to the recently opened Museum of Innocence, a collection of objects used by and dreamed of by the characters in Pamuk’s novel of the same name.

What Pamuk has done to draw attention to Turkish writers and the importance of preserving freedom of expression, the well-connected curator and writerVasif Kortun is doing for Turkish contemporary art through his directorship of a new center called SALT. Seated in Beyoğlu, a hip enclave of restaurants, hotels, and, now, galleries, SALT provides several art assets previously lacking in Istanbul, including a stunningly large and modern exhibition space and a research archive of art books and criticism. Istanbul Modern, the city’s modern art museum, is also avidly drawing attention to young artists with its current exhibition “New Works, New Horizons.”

Artists are gathering and striving, exhibition spaces are being built: preservation of the ongoing moment is at work.