The adolescent room I began my writing in (where I lived with my parents until I got married, too early I’ll admit now) had a large window with a lace curtain and a green blind. The window faced directly onto a busy street. Barely two metres separated the window from the sidewalk.

After that room, there was a second with a window that looked out on a neighbour’s back yard. In the yard was a small wooden shed in which a single woman lived. She would wash her clothing by hand in a plastic basin placed underneath an outside tap. On several occasions I saw her wash her hair or that of a friend in the basin. She would spend all day in her pink nightgown sitting on an old blanket on the ground braiding her friends’ hair.Her washing hung from a sagging piece of nylon rope strung between crooked poles.

When I left that house—and the woman I had married when I was too young—I moved briefly to a small village and a house that had belonged to Athol Fugard. From the sitting room, where I wrote my first published collection of poetry, I looked out across a bare gravel yard, a single strand of wire for a wash-line, some small trees in the hard earth, a wall of balanced stones, and, in the distance, a brown hillside covered in rocks. It is a scene of stark beauty that I visit over and again in my memory. 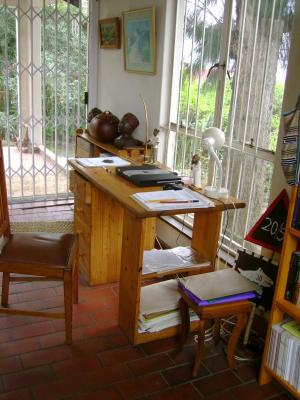 When I returned to the city, I moved into a converted garage in someone’s back garden. My small bedroom, where I wrote sitting on my bed with my back against the wall, had a window with an unpainted wooden frame and simple wire mesh as a burglar guard. Outside the window my landlord’s three young daughters cavorted around a small plastic swimming pool.

When I married again, I moved to a house that had more glass than walls. It consisted of two large open-plan spaces; the area I wrote in had a view of paw-paw trees and palms in which noisy weaver birds made their nests, and a line of tall swaying bamboo. It was a house that let everything in, even the lightning and the dark summer storms.

But we were only tenants in that house, and the floor was cracked from one end to the other, and the foundations were slowly sinking.

Now we own an old house with wooden floors. There is a fireplace in the room I write in, although it does not draw properly. My window faces onto the sound of water falling in a small fishpond. There are no fish, because the birds have eaten them all. Only the water is left, and its small sound, like glass wind-chimes.

Kobus Moolman is the author of the poems “He Pleaded Ignorance,” “Hunger,” and “The Wrist,” published in Issue 04.