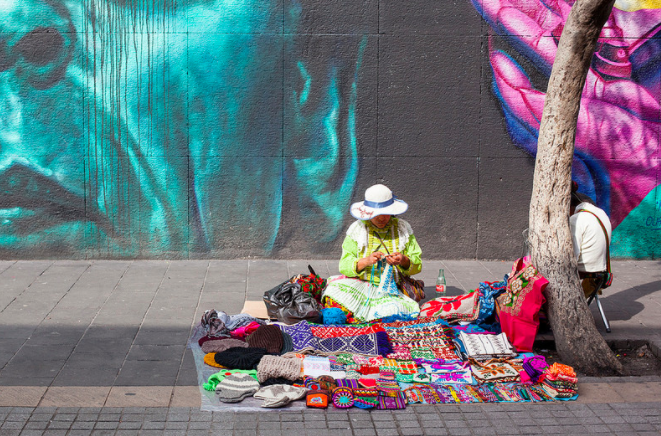 1)  Five Names: Before it was destroyed by Cortez, the Aztec city that stood where Mexico City is today was called 1) Tenochtitlan. In the late 18th century the city was known as the 2) City of Palaces because of the grand mansions built by wealthy nobles and merchants. Today it is 3) Ciudad de Mexico or, as the capital of the nation, the 4) Distrito Federal, or 5) Mexico, D.F. (like Washington, DC).

2)  Five Visits: Whether you call it Tenochtitlan/Ciudad de Mexico, or the Distrito Federal, the traditional center of the city is the Zocalo, the city’s huge main plaza. We visited the Zocalo five times during our week in Mexico City: once to eat dinner in the rooftop restaurant that overlooks the square; once to attend an outdoor concert; once to see the dancers who dress in feathers and shells and dance as they believe the Aztecs might have done; once to see the Diego Rivera murals at the Ministry of Education (but we can’t get into the building because the entrances are blocked by striking truckers); and once to observe a massive demonstration by citizens who believe recent election results were rigged.

3)  The Fifth Countess: Near the Zocalo is the House of Tiles, La Casa de los Azulejos. The building was constructed in 1693 and covered in tiles a few decades later, but no one really knows why. One possible explanation is that the fifth Countess Del Valle de Orizaba, who was from Puebla, Mexico, a region famous for its tiles, decorated the mansion with the blue-and-white tiles of her homeland. The building has Moorish and Spanish influences, as well—minaret shaped spires and French doors that open onto wrought-iron balconies. The interior is equally elegant with marble floors, mosaics, a grand fountain, and a mural by Juan Clemente Orozco, Mexico’s second-best known muralist, after Diego Rivera. The House of Tiles is now the flagship restaurant of Sanborns, one of Mexico’s best-known restaurant chains. Carlos Slim, the richest man in the world, owns Sanborns today. Slim made his fortune in mobile phones.

4)  Five Beetles: Across the street from the House of Tiles we find cars resurfaced with broken tiles or half-buried in dried maize. They are part of an outdoor art installation called A Vuelta de Rueda (The Turn of a Wheel), by artist Betsabee Romero. Large photographs documented other Romero installations, including some at the U.S./Mexico border, where Romero placed a line of half-buried cars loaded with baggage, obviously going nowhere. In the center of the exhibit, five VW Beetle chassis form an archway crested by five bicycles. A dozen rubber tires are part of the exhibit as well. Some are gilded with Aztec symbols. Others have been carved and inked to print patterns evocative of Mexico’s heritage and resources when the tires roll over fabric and paper.

5)  5 x 35 Subway Stations: The trains in Mexico City’s subway system have rubber tires. The ride is smooth and quiet. Each of Mexico City’s 175 subway stations is represented on maps and signs by a square icon that portrays an animal, structure, or person associated with the station. The icons are color-coded to show which of the city’s twelve subway lines they are on. The shapes in the icons are strong and simple, much like those in the pictographs of the Aztec writing system.