Is your summer to-be-read list getting sparse? Check out these exciting reading recommendations by TC’s latest contributors, including vibrant poetry that explores identity and relation and two novels that dwell on strange encounters and liminal places. 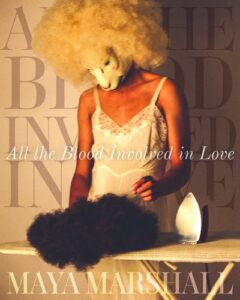 Maya Marshall’s All the Blood Involved in Love, recommended by Susanna Lang (Contributor)

Those of us already familiar with Maya Marshall’s poetry have wanted to see a collection for years, and her debut, All the Blood Involved in Love (Haymarket, 2022), is worth the wait. There are many poets writing now who focus on their identity, but they do not all have access to such rich language that lifts the concerns linked to her identity—Black, female, queer—to the level of poetry.

A persistent theme in Marshall’s book is motherhood, both her relationship with her own mother and her choice not to mother a child of her own, and especially not a Black boy:

When I say “son” I mean the corona blistering
bright, covered in shadows, a circumference of dark flames wavering.

A Black son is an “absence,” a grown man “afraid to be outside in his body,” a dragonfly “brilliant, iridescent, / conspicuous in flight.” Not that it’s safer to birth a girl:

Accused and accused and the news hangs on their skin.
American girl fears for her life. We girls—
targets on radar, small lights blinking: I’m here, I’m here.

Her choice not to give birth is made out of love, a way to call down blessings on the missing child.

Marshall’s relationship with her own mother is equally ambivalent, and for the same reasons. When her brother asks her to promise him that she won’t leave him alone with their dying mother, and that she won’t become her mother or her mother’s mother, she understands. She writes,

There’s no uncertainty about this voice, about the poet’s Blackness or femaleness or sexuality. But like all fine poetry, these lyrics reach beyond identity so that they also speak to my own conflicted grief in these months following my mother’s death, though I have lived such a different life from Maya Marshall’s. I hope that we will not have to wait as long for her second collection, which I look forward to reading. Meanwhile, check out the online journal that she co-edits with Marty McConnell, underbelly (underbellymag.com). Each issue features writers discussing how they moved from an early draft of a poem to the final version, with the drafts presented side-by-side so we can see the transformation. It’s a whole education in craft. 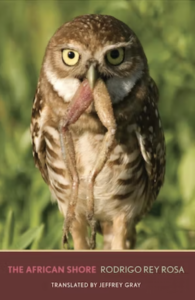 Rodrigo Rey Rosa’s The African Shore opens with a young Moroccan shepherd, Hamsa, searching for a lost lamb. The search, as the sun blushes the ledge of the Tangier landscape, takes him to a cliff over the ocean. Far below, but still high above the crashing surf of the water, the lamb stands bleating from a rock ledge. I’ll leave what follows for you to read, but it’s one of the most charged, elegant, and surprising openings of any I’ve read—and the book follows with similar intensity and beauty.

The attempt to rescue the lamb gives the shepherd a fever. This sets up the second major storyline of this novella. We meet a Colombian tourist hungover in a hotel: he drinks, cavorts, and would seem very different from the shepherd. The two narrative lines proceed mostly laterally, occasionally crossing paths, but always connected. Their connection is an owl the Colombian buys from a market. And it’s this mysterious owl who becomes the real driving force of this book. She blurs all the simple bright lines of the human machinations around her—a humanity increasingly cynical rather than sophisticated. The owl’s silence, passivity, and animal agency guide us like light through the book’s dark, koan-like human spaces. She produces the book’s deep soulfulness—as if from an alchemy of Rosa’s combination of elements.

Rosa was a protege of Paul Bowles, who translated several of his young student’s early books. Rosa’s prose, like Bowles’s, is gorgeous and spare—astonishingly lucid and gestural at once. You feel as if you’re threading like an electrical charge through his writing’s intuitive space. The moral questions harden in Rosa’s controlled ambiguity—grow durable as a sublime kind of open truth by the end. Rosa leaves so much in the silence. The African Shore‘s strong presence of substance is felt, but its contours dart away as we turn to see them more clearly. And so we internalize them. It’s one of the most profoundly affecting books I’ve ever read. 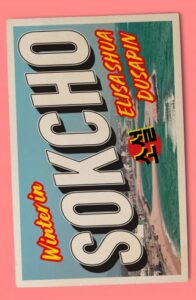 Winter in Sokcho by Elisa Shua Dusapin, translated by Aneesa Higgins, is a sparse, delicate novella that follows a French-Korean woman who works in a guesthouse in Sokcho, a tourist beach town just south of the North Korean border. It’s winter, and both the town and guesthouse are desolate. Her boyfriend is rarely present, instead nurturing his burgeoning modeling career. Her mother, a fishmonger who cleans fish from toxins so they can be served, is dissatisfied with the narrator’s appearance and romantic life. When a French cartoonist, Kerrand, arrives seeking inspiration in the eerie landscape, a coercive tension emerges between them, a relationship propelled by both unease and possibility, as she takes him around the bleak landscape, compelled by the promise—whether it will be a wound or an awakening—of being reflected in his drawings.

This is a restrained, delicate book, instilled with a haunting gentleness. It’s not a haunting that comes from fear, but rather, from loneliness and the subtle feelings of restlessness and alienation. The fragmented plot is fluid; it’s a book that wraps you up in its mood with precise, quick images that slice off the pages yet never wallow in their potency. “Oozing Winter and fish, Sokcho waited. That was Sokcho. Always waiting. For tourists, boats, men, Spring,” remarks the unnamed narrator, she herself caught in this perpetual waiting. The book is haunting in the quiet, human way; the characters and storytelling possess an enigmatic quality that can never be pinned down.

There is a hypnosis to the unnamed protagonist’s fleeting narrative voice. She is aware of the nuances tangling between herself and the French cartoonist but leaves them mostly unacknowledged. Though quiet and cerebral, there is a visceralness and a discomfort to the way she examines and is examined by others. The way the story engages with the body is a constant clash of both interior and exterior—the sensory pangs of existing, the cloying awareness of others’ judgments. Her struggles with body image are both plain and unacknowledged in the text; the story does nothing to obscure them, yet she will never speak of them, either. She is like this with most things. She is a playfully ambiguous narrator, vulnerable yet distant enough that much of her remains unspoken, instead felt through her sensory interactions with the story’s world. She is melancholic, but too coy to ever feel self-pitying. She is both apathetic and revelatory. She is bored yet keenly aware. She is so ghostly it becomes a form of intensity. These contradictions don’t just make sense, they are the core of her—someone caught in a limbo of cultures, relationships, and identities. She is a person of borders. Her foundation of self is in contradictions. She cooks food but doesn’t eat it. She learns French to distance herself from her mother rather than draw her closer to her father. She is both compelled and repelled by Kerrand’s assessments of her. She is a character who is always either daring you to observe her or obscuring herself from comprehension.

Alongside the narrator is the enigmatic French cartoonist, Kerrand, whose arrival marks not the beginning of the narrator’s unraveling, or even her attempts to make sense of herself, but rather presents an opportunity to see herself through another person’s eyes. She can hardly parse which aspects of herself are true and which are the impressions of those around her. Could this be a chance to see herself in a pure, distilled way? She seems to know from the start that it will not be so simple, yet pursues this opportunity regardless. Like her, Kerrand’s quest is to find truth in isolation. His comics all feature a lookalike character rendered in black and white, who wanders from location to location with each volume, hardly speaking. Kerrand has come to Sokcho looking for closure, seeking inspiration for the final work of the series. He is a clear yet awkward reflection of the French father she has no relationship with, but his arrival does not feel like an opportunity for connection, but rather, another wedge prying apart the cultural severance within her. To her, Sokcho is liminal and complicated, closure antithetical to its nature—it is a place not of beginnings or endings, but a restless limbo between. He seems to think this limbo can be escaped, but she knows it cannot be. She knows that what he wants from Sokcho—and from her—is not possible, but she’s compelled by the possibility of it, and approaches him with a curious restraint. What does it mean to be seen—and captured in art—by someone who can never understand you? What will you see reflected back in this warped version of yourself? What will be the consequences of such a capturing? Subtle discrepancies arise in what they want from each other, how they see each other, how they try to comprehend the other’s world and their place in it. The characters in Winter in Sokcho look at each other, but rarely see each other. Though they look to find understanding of themselves in art, in narrative, as they seek this, we can feel the fraying of their identities. “[W]e’re on a knife-edge,” the narrator remarks. “It could all give way any moment. We’re living in limbo. In a winter that never ends.” It’s not a book of answers, but a book that sinks into the restless divisions and borders that the characters have no way of reconciling.

It’s a book that defies categorization in many ways, cathartic in the way it nimbly darts around the implied promises of its premise, instead finding more interesting nooks to explore than the expected. This does not feel like subversion for the sake of subversion; rather, by the end, the upending of the story’s promises doesn’t feel like a self-aware dodge of the expected, but an exhalation of inevitability. The ending resounds past the last word like a struck cymbal. It’s a brilliant exercise in both interiority and atmosphere, barren and visceral all at once, dripping in atmosphere, the entire thing delivered in a whisper. Winter in Sokcho is a book that manages to be all at once tender and unsettling, elegant and brutal, soft and sharp, and its chill sticks in your bones long after the final page.