For our September round of Friday Reads, we spoke to two recent online contributors: Kaori Fujimoto, author of the dispatch “Shinjuku Golden Gai and the Midnight Diner,” and Sophie Crocker, author of the story “Lyuba Boys.” Their recommendations both speak to the power of language; an American author journeys toward writing in Italian, and a new collection of poems challenges English as a weapon of colonialism.

Recommendations: In Other Words by Jhumpa Lahiri and Pilgrim Bell by Kaveh Akbar 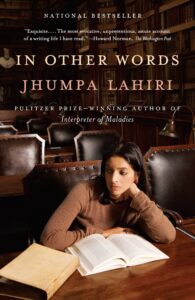 Jhumpa Lahiri’s In Other Words; recommended by Kaori Fujimoto (contributor)

In Other Words by Jhumpa Lahiri begins with a two-page essay that likens the challenge of swimming across a lake to that of learning a foreign language. “I’m aware that the lake is very deep in the middle,” Lahiri writes. “For twenty years I studied Italian as if I were swimming along the edge of that lake. Always next to my dominant language, English. Always hugging the shore […] But you can’t float without the possibility of drowning, of sinking. To know a new language […] you have to leave the shore.” In the more than twenty essays that follow, Lahiri recounts how she began to swim, continued the strokes in the water, and learned to float long enough to write in Italian.

I admit I immensely enjoyed reading this essay collection because I also write in a language I adopted as an adult, which is English. I could relate so much to Lahiri’s sentiments about learning to read and write in a new tongue (e.g., “Every page seems to have a light covering of mist […] Every new construction seems a marvel. Every unknown word a jewel.”). At first blush, Lahiri, a Pulitzer-prize winning fiction writer, appears to be writing about her journey to become an American writer writing in Italian. But the thread that runs through her reflections, I think, goes beyond a story of literary multilingualism to something universal. She finds a home in the act of devotion—which borders on obsession—to the language she fell in love with as an adult. It is a home that her world of origin did not provide, even though that world gave her a solid family background, education, marriage, and numerous literary awards for her novels and short stories.

Doesn’t this “home” sound like what you can’t not do, no matter what it might be, despite the fact that you technically don’t need it to lead a decent life? You struggle to swim in the lake of your passion, consider quitting but somehow you can’t, and, in time, you find yourself floating, relishing the weightlessness over the water’s deepest point—but your work will never end, even while floating. If this sounds familiar to you, I think Lahiri’s journey might speak to you at a deep level. And immersing yourself in her exquisite language is a simple, yet incomparable, pleasure.

(The book presents the original text Lahiri wrote in Italian and the translation done by Ann Goldstein, an editor at The New Yorker, in a dual-language format.) 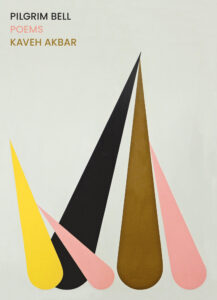 Kaveh Akbar’s second full length collection, Pilgrim Bell, which follows his breathtaking debut collection Calling a Wolf a Wolf, is what Akbar fans have been waiting for—and more. Pilgrim Bell, in classic Akbar form, is both humbling and humble. It takes the vastness of God and fits it into an entity so small, He can be squeezed from pores. It shrinks the devil into a miniature creature in the throat of Adam. Somehow, through this, Akbar’s speaker remains curious, self-questioning, and startlingly, tenderly flawed. This is a speaker that remarks: “I murdered my least defensible vices, / stacking them like bodies / in the surf” and “Some pain / stays so long its absence becomes / a different pain.” Throughout this collection, there is a powerful sense of both presence and negative space.

One subtle development I noticed between Pilgrim Bell and Calling a Wolf is the increased presence of Akbar’s partner’s voice in his work. Since 2018, Akbar has been married to, in his own words, “transcendent American poet” Paige Lewis. Lewis’s collection Space Struck showcases their own distinctive voice, separate from Akbar’s own. Lewis’s voice is brilliantly childlike in its empathy and brightness. In the margins of my copy of Pilgrim Bell, beside the opening four lines of the poem There Is No Such Thing as an Accident of the Spirit (“You can cut the body in half / like a candle to double its light / but you need to prepare yourself / for certain consequences”), I penciled the note: “does [Akbar’s] poetry become more like Paige Lewis’s, with love?” I believe that it does. To me, malleability is one of the most appealing aspects of the poetic process. Specifically: that one’s poetry can change with exposure to care, to devotion. Sure enough, in the acknowledgements, Akbar thanks Lewis by saying: “You are in every line.”

In Akbar’s lecture Towards the Revelatory Break, which I was fortunate enough to attend last year, he speaks to what could be called his process, though in the case of Akbar, this term feels insufficiently meditative, considered, and considerate. In this lecture, Akbar discusses how dangerous the English language is. English is a deadly colonial tool. English inherits violence even in some of its most seemingly innocent words. As such, Akbar approaches poetry with “the delight of a new encounter with language.” In his work, language must be broken apart in order to unlearn its cruel beginnings and often-cruel present tense. Mirroring this, there is a sense of generational karma in his work. Of his “earth-father [who came] to America knowing no English save… how to say thanks God,” Akbar asks, “Will his goodness roll / over to my tab and if yes, how / soon?” In his poetry, Akbar understands the gravity of the history of this language and the history of his own family. He is a responsible poet unafraid of both the beauty and unbeauty of life, the brutality and joy, his own mistakes and how he has learned from them.

In its breathtaking survival – “art is where what we survive survives” – Pilgrim Bell is a poetry must-read of 2021.