To reach Kumbhalgarh, one drives two hours north from the charming lake city of Udaipur through the Aravalli Mountains. Until the end, the climb is gradual, and the countryside is rock-strewn and brown, save for the flames of the forest, the shocking orange flowers blooming from dead-looking branches. (When the rains come, the flowers will fall, and the trees’ wide green leaves will be used for plates.) But just when the roadside rhythms have slowed to match the bullock-pulled wheels drawing water from the wells, a throng of pink and orange and yellow saris jump into the road and halt the car. It’s the week of Holi, the Hindu festival of colors, and these women extract a few rupees in exchange for a fierce bit of dancing.

Medieval toll collectors and feudal systems firmly in mind, we rise sharply to 1,100 meters above sea level, where the fortress built in 1443 by Hindu maharana Rana Kumbha comes fully into view. First, you notice the walls. Broad enough in places for eight horses to stride abreast, these are the longest walls on earth after the Great one in China. The periodic lookout points are rounded and wide at the base, so their impression is of a row of marching elephant feet. A show of strength among ruin. We can’t yet see the hundreds of temple remains inside the walls, just the now-empty, sky-reaching palace where the royal family would retreat when under attack. 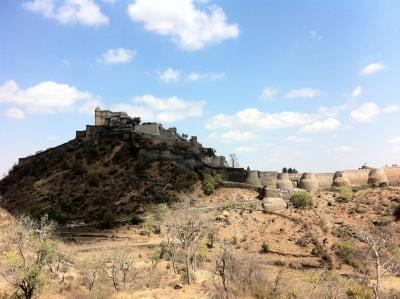 There’s obvious pride that the fort was never taken—not even after a two-day siege by multiple armies fighting for Mughal Emperor Akbar—and signs reading “Our Heritage is our Glory” have been posted by the Archeological Survey of India at the main gate. Yet, unlike Udaipur’s City Palace, and the resplendent Islamic Mughal tombs like Humayun’s in Delhi and the Taj Mahal in Agra, this monument is rather plain. Other than a few painted panels of playing and processing elephants, there is, as our guide Popi says, “nothing special just the view.”

So we climb. It’s hard puffing work at this height and under this clear-eyed sun. We note the thin metal pins that clinch together massive granite blocks and the holes drilled to allow rainwater runoff. The palace courtyards have been scraped clean by age, or perhaps were never well attended to. There are several Western tourists, but there are more Indian families on vacation. Women in saris and sneakers, children in tow, call ahead to ask how much further, and they grumble about the government taking tourism money away from the local community. Not everyone is happy about ASI taking over this site, just as the dancing women on the “toll road” were seeking some local gain from the government road running through their village. A few older and larger women fall by the wayside, but most of us push on: any ascent, even a scramble over a backyard stone wall, can’t help but be a little exciting, I think. Yet we’ve come a long way, and I’m not yet sure this view will be worth it.

Just before the top, we pass through a last secret passage and up a final narrow flight of stairs. Then the temperature drops and the wind whips. We step, blinking, into the sun and literally hold onto our hats.

We turn once, twice, half a dozen times, but it’s not enough to take it all in. We pace inside the walls and strain our eyes far as they can go. Up on this rooftop perch there’s nothing special—a simple dome and chest-high walls—just an astonishingly grand view. Just this vast expanse to eye-wend, to survey; to say: all this is known and it is mine. To the south is Udaipur; Jaipur to the northeast and Jaisalmer northwest, and beyond that Pakistan. In the face of the bruise-colored mountains and desert plains, with even more mountains stretching beyond, every greenish sprout and dusty human path is a new source of wonder. This is, obviously, the pinnacle. I wonder: What else but the view could you want? 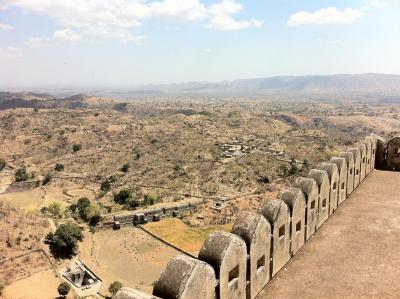 Twelve kilometers away as the crow flies, but fifty hairpinning through mountains stocked with black-faced langur monkeys, is the Jain temple of Ranakpur, whose land was given by the same Maharana Rana Kumbha who built the fortress. Five hundred years have darkened the egg-shaped domes seen from the outside, yet the temple is still very much in use, as signaled by the draping red flags with the Hindu swastika. (A few days prior I’d seen a turbaned Indian man my age wearing a tee-shirt with 卐 on the front, and on the back the words: This is our Hindu symbol, not your fucking Nazi sign.) The outside is steeply imposing, but secretive, about what lies within.

I am not prepared for what is within: an endless expanse of pure, white marble, every inch of which is hand-carved, including dozens of perimeter temples, 80 domes, and 1,444 pillars, no two alike. Filtering through the multistory temple is clear sunlight. If there were rain, it would come pouring in. Slowly, we wander among the pillars, whose bases are covered in grinning, monkey-faced demons. Proceeding upward are scrolling vines and flowers, winding rows of ducks and deer. Toward the capitals are the plushy torsos of four-armed lady angels. Then slung-hipped persons with waist strings and pointed hats. You have no choice but to lean back against the pillar behind you, crank back your head, and take in the heavens.

For carved into each milk-white dome is the massive pendulum of an extraordinarily intricate chandelier, the carvings both stoic and delicate and offset by carved-away negative space. Pain creeps into the back of your neck, but you press backward harder because you haven’t seen enough. 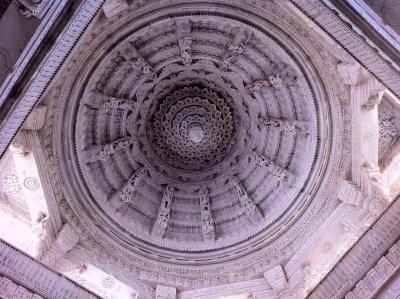 I step aside to make room for the others pouring in to awe beside us. On a clean-swept marble platform to our right a thin-faced monk mixes sandalwood paste to anoint the worshippers. He wears a mask to keep from inhaling and killing any insect, observing the central Jain tenet of ahimsa, strict nonviolence.

Returning my eyes to the buxom angels on the ceiling, I feel a wash of relief that nothing has been painted—the figures are simply themselves—and though the contexts are quite different, there is something about the spirit of rendering the fleeting natural world into permanence that brings to mind the poem “At the Foundry” by Nancy Willard.

Here is an angel, here is a tiger
guarding a nude woman dreaming herself
into marble. Here is a bronze wrestler so big
a visitor fainted; hence the removable fig leaf.
I could lose myself in this foundry.
I am the smallest creature in it.

Things come and go, as God invents them.
May the molten bronze cool.
May the copper rose remember its thorns.
May the pewter bird discover its wings.
May the brass book lie open, indifferent to time,
turning and turning its pages of light.

Light and shadow, the timeless devotion to some god’s creation, I was stunned, speechless for the second time that day, but in such a different way than at the fortress.

Unlike at Kumbhalgarh, the temple vistas extend only as far as an average office corridor; the whole building is human in scale.  At first, the pillars appear to be divinely perfect, but then we see one that is not. One is canted to the right. It’s an intentional imperfection, we’re told; its lean emphasizes human fallibility, a reminder that perfection comes only from God. Another reminder of the human imperfect—the profane, in this case—is on the backside of one pillar, on the back to demonstrate that this aspect of life should remain outside the temple. It’s a series of kama sutra figures bent and rapt with pleasure.

In the morning, on this clear day, we scaled a great man-enhanced height. Not a pleasure palace, nor a place of worship, but a fortification approaching the sky. In the afternoon, transcendence came on the scale of minutiae. The two illustrate so vividly the sightseer’s age-old dilemma: the overview versus the intense study. While Kumbhalgarh is a study in vastness and imagination, Ranakpur draws one into a precise representation of a multilayered universe. 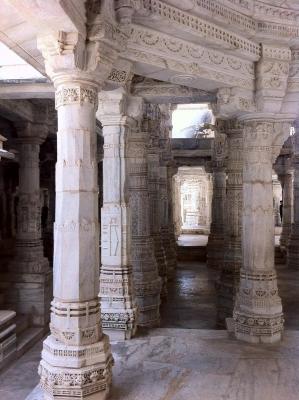 This is the ongoing, unsolvable argument I have with myself: Is it better to take in the grand view, get the lay of the land, or plunge into exhaustive, detailed investigation? Should I be a student of the macro or the micro? I’ve met a few special people who can be both, but I’m not one of them. Days before, in the National Museum in Delhi and in Udaipur’s City Palace, I’d thought I had decided what kind of person I could be. I’d fallen in love with the Hindu and Mughal court traditions of miniature paintings. Paper canvases in which the brushwork—created by single hairs from a squirrel’s tail—was so fine that individual turban folds and the scrolls of fantastic moustaches are rendered in the space of millimeters. So fine one needs a magnifying glass. But, I realized, once again, at the height of Kumbhalgarh, the grand quiet expansion of a view simply can’t be ignored.

Perhaps one way to see, at least temporarily, the wide and the deep is as a man in the textile business in Udaipur told me. He goes to Ranakpur with his family twice a year, but it’s not to examine the carvings. He enters the intricate space for the mental view. He visits in the early morning and again late in the evening to meditate, when the light is soft and the clamoring, uncertain crowds are absent.