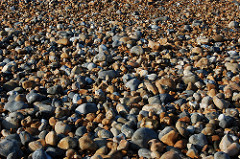 By MARIE GAUTHIER
They hack their way through the wild
kingdom of the back yard
while she alights on a chair, her book
unopened on the grass, more
rest for her glass than her eyes,
which follow to foil: spoiled
moods, spilled blood, numinous
harms yet undreamt.
Bronze-headed boys goldenrod-tall,
hunched-over treble clefs,
they dig pockets into the dirt,
rummage their hands around cool clay
seams, pulling root threads loose.
They’re not hunting the usual
buried treasure, but rocks crab
apple small, which they crush
onto other rocks smaller still:
it’s the quartz inside—the cosmos
dust of impact, the refracting jagged
hearts—they want.
Blow upon blow only rocks collide,
fingers curled back from the edges
as the centers crack—Spanish red
swirls in her glass, wine-eyed sunset
casting its glow as if to diffuse
the shattering, the inevitable crash.

Marie Gauthier is the author of a chapbook, Hunger All Inside, and recent poems can be read in The MacGuffin, Cave Wall, Hunger Mountain, Magma Poetry, and elsewhere. She won a 2008 Dorothy Sargent Rosenberg Poetry Prize in addition to an honorable mention in 2010. She lives with her husband and two young sons in Shelburne Falls, Massachusetts where she works for Tupelo Press and co-curates the Collected Poets Series.