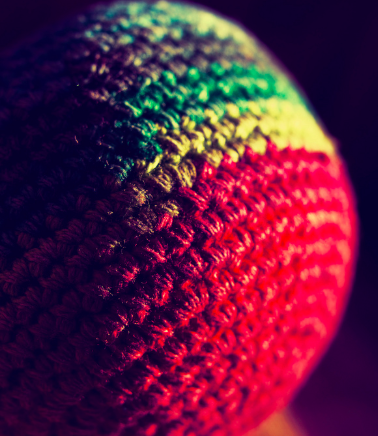 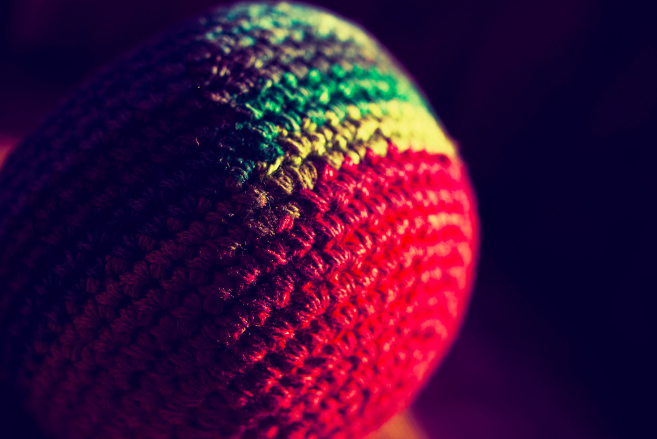 His business card is cut from the corner of an old photo. One side is the chopped image of a carpeted floor, a screen door, a chubby toddler’s left arm and hand. I flip the card over. Written in permanent black marker across the glossy white back are these words in this precise arrangement:

When I walked into the post office, there he was, smiling a huge smile, a front tooth missing, that empty space where the tooth should have been locking my gaze. He’s in his fifties, maybe his sixties, with a fuzzy gray beard and a buzzed head. He’s wiry and energetic, dressed in a baggy yellow t-shirt and long black shorts. Like a bumblebee, I think.

His question surprised me. It’s been years since I last played, I said, but yeah, after I take care of a couple things, sure, I’ll give hacky sack a try. He left and I stamped and addressed an envelope. Less than two minutes later, as I turned from handing my letter to the clerk, he appeared at my side, surprising me again. He wasn’t sure if I still wanted to play. No, I do, I said, and we walked outside together. Then he pulled the business card from the neat stack of chopped photos in his wallet.

The first time he tosses the sack into the air my foot springs up and I juggle by myself, losing control after six or seven touches. He lifts the sack from the grass and tells me how he likes to play, tossing it again. He likes to rally, one touch per player, back and forth, a relationship of passing. He’s very particular about this, though not prickly. He calls his game Hot Potato. He says the style of hacky sack where each player focuses on his own maneuvers and tricks is narcissistic.

Now he’s smiling, flashing me that one big front tooth. We just had a solid rally, the sack drifting back and forth between us for a full three minutes, our bodies moving to a silent beat. The beat felt good and it felt like nothing, like neither of us had to try, like all we had to do was get out of our own way.

He calls this The Flow.

Yes, I think, and tell him that when my friends and I got cut from the soccer team in high school we played hacky sack every afternoon. We’d put on techno music, blast it from a car with open doors, and lose ourselves for hours in the driveway. We were serious about it. We wore athletic shorts and went to the gym to play during winter.

He smiles and we start over again, passing and talking, discussing a few of the many challenges to living a life that goes with The Flow.

The hacky sack drops. We laugh. People are going in and out of the post office and we’re sitting down, resting. The sun is warm, the grass so green, and we’re up again, playing. We’re mirroring each other’s moves. We’re dancing. The man is on fire. He’s buzzing like a bumblebee.

Every card in his wallet is different, every photo cut by hand, every picture a fragment of some larger story. And, wow, the hacky sack simply will not fall this time. It’s got a life of its own. It’s right here, between us.

Leath Tonino is the author of The Animal One Thousand Miles Long, a book of essays about traveling in Vermont, his home.