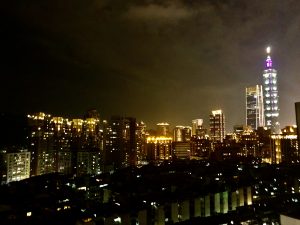 The three of us—Frances, Jay, and I—live in this rain-slick city, concrete buildings stained with runoff. At night, the streets stretch like black pools, glossy with reflected traffic lights. We stumble around half-closed night markets with our snapped umbrellas and damp socks. Our pockets weighted with bruised change, we eat charred oyster mushrooms crusted with cumin and rose salt, waiting out the rain under fluorescent storefront awnings.

After dinner, we retreat to our apartments, three dots along the Blue Line. Frances has a bachelor pad in a high-rise, the 101 looming darkly. His large windows and concrete walls are suggestive of a lunar colony, the city lights blinking around him like distant, cold stars. Jay lives in a clean, quiet network of residential alleys. Their apartment smells of bleached wood and fresh white paint. The front door of their building is decorated with an assemblage of wrought-iron vines, bronzed leaves. The handle is a curlicued tendril extending shyly past the doorframe, as if seeking a hand to shake.

I’ve chosen to live in an old building near the Zhongxiao Dunhua station. My address bears an unlucky number repeated four times—an invitation for the foolish, or the foreign. Despite knowing better, I took the apartment: a cozy box with orange kitchen cupboards and dusty wood flooring. Every evening, the neighborhood cats yowl over territory. From my balcony, I watch them fight over a rusted green roof three floors below mine, leaving the metal dotted with fresh, dark blood.

When we flew into Taipei three weeks ago, having just finished a fellowship conference, we split off for our government-mandated quarantines. Jay was sent to a hotel with a marble bathtub and a rain-streaked view of the street. Frances and I split ways at the cab stand: he was ferried off to his apartment, and me to mine. Cloistered on the fourth floor on my building, I ate frozen dumplings and kimchi for every meal, then bleached every surface with antiseptic wipes to keep the roaches away. In the afternoons, I watched the cats fight, or saw the death toll rise in the United States, or called my partner about their visa situation in Seoul, or went back to sleep, skin prickling with damp heat.

My final night in quarantine, my friend died. I got the news at 3 AM, which was late morning in California—a distant, parallel timeline. I paced my room, then swept the floor clean of my hair, then cleaned my refrigerator, which carried two weeks’ worth of rotting food waste. Because I couldn’t dispose of my trash while quarantined, I’d frozen all my scraps, then tried to mask the odor using tied-up bags of coffee grounds. It bothers me that when I think of Ant’s death, I also think of that smell—sweating, soft vegetables with a bitter edge of coffee. It’s been days since then, and I swear that the smell persists, even though my apartment is as clean as can be, and I eat food off the street every night to avoid cooking.

Well, I say to myself on the two buses home from work, or the one train it takes to get anywhere else in the city—at least I am alive here, I am safe. As the Taipei winter stretches on inexorably, rainy night after night, at least I am not in California, where my college acquaintances spend their days locked in front of computer screens. Where my childhood friend works the night shift in the ER, where my brother’s friend took off her mask in public, then reported a fever the next day. Where Ant died for reasons unrelated to the pandemic, but also related, because isolation magnifies suffering. Where my parents built a life decades ago, and where they are now trapped. How could they have known that their homeland would one day be one of the safest places on Earth?

A few days ago, I visited my mother’s alma mater at night, the campus peripherally lit by floodlights. I leaned over the railing of the school’s famous pond, dotted by water lilies and sleeping birds balanced on one leg. I tried to imagine my mother there—young, thronged with laughing friends, bag weighted with textbooks. Strange that her home country became mine this year, and that where she lives now is an imitation of the country I’d been taught to love. Strange that I can see myself staying in Taipei forever—even if the winter is just one long stretch of rain, even if the chances of seeing someone I know on the train are very low, even if at night, the cats sound like children screaming, and I miss the ones I love with a fury I often misname as grief.

Ariel Chu received her MFA in Creative Writing at Syracuse University, where she received the Shirley Jackson Prize in Fiction. A former Editor-in-Chief of Salt Hill Journal, a 2019 P.D. Soros Fellow, and a 2020 Luce Scholar, Ariel has been nominated for the Pushcart Prize, the Best Small Fictions Anthology, and the Best of the Net Award. Her writing can be found in The Masters Review, Sonora Review, and Wildness, among others. Visit her at ariel-chu.com.