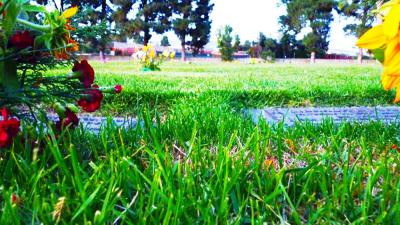 Usually 4 p.m. glares on my windshield as I head to the Hollywood Hills Forest Lawn Memorial Park. I am 75 miles per hour on the 134, maybe more. Others fly by me, impatient. The temptation to catch up to them is strong, as always. But I stay below the eighties, as though the seventies are the right glide, on Lenny Kravitz tunes. At the exit, flower vendors on foot wave roses and chrysanthemums. Their nearest competition is the flower shop at the gate, less than a mile away. You’d think they’d sell for bargain. But I buy a bunch or two anyway. It beats walking to the shop, and ringing for someone to come out when you’re ready to pay. 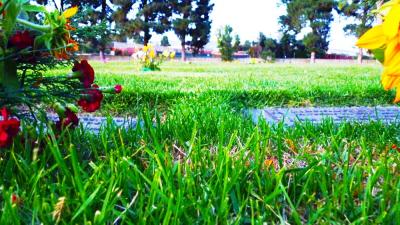 Often I leave flowers out. Instead, I bring engine oil to give the tombstones a gloss after brushing dust away. I squeeze a few drops of oil onto a piece of cloth and start with the vowels. It’s easier to move the cloth on their curves, unlike the angular consonants, which are rigid and sharp. I take my time. The smell of oil lingers for a while, before breezes take it away. I’m not sure what goes through my mind as the cloth moves over the names. It’s too easy to say that flashbacks crowd these silent moments. I prefer to think that memories sneak up on you when you’re least conscious of them – when you’re humming a tune, displaced by someone’s inflections, or during phone calls that animate familiar phrases.

One time, I counted the number of letters of each name, to see if their sum was equivalent to the sum of numerals on the dates for each tombstone. No coincidence was discovered. Sometimes I document the shined stones with my cell phone camera before I leave. I don’t remember ever praying during these visits. Occasionally, hints of incense waft through my silence, like murmurs from someone’s ritual nearby, dispersing, fading into the field of flowers and stones around me that resemble rural settings in old movies. I haven’t considered parking my dust here, near my loved ones, now neighbors with movie stars they admired, resting together, regardless of class and race, on this section of the Hollywood Hills. The Hollywood sign rises on the other side, the southern slope, overlooking a flat basin of structures that refuse to tower over each other, unlike those in downtown L.A. that reach for stars, to declare their power over this sprawl that’s deceptively egalitarian. Then there’s that moment before stepping in my car, after washing my hands, when I feel I forgot to do something.