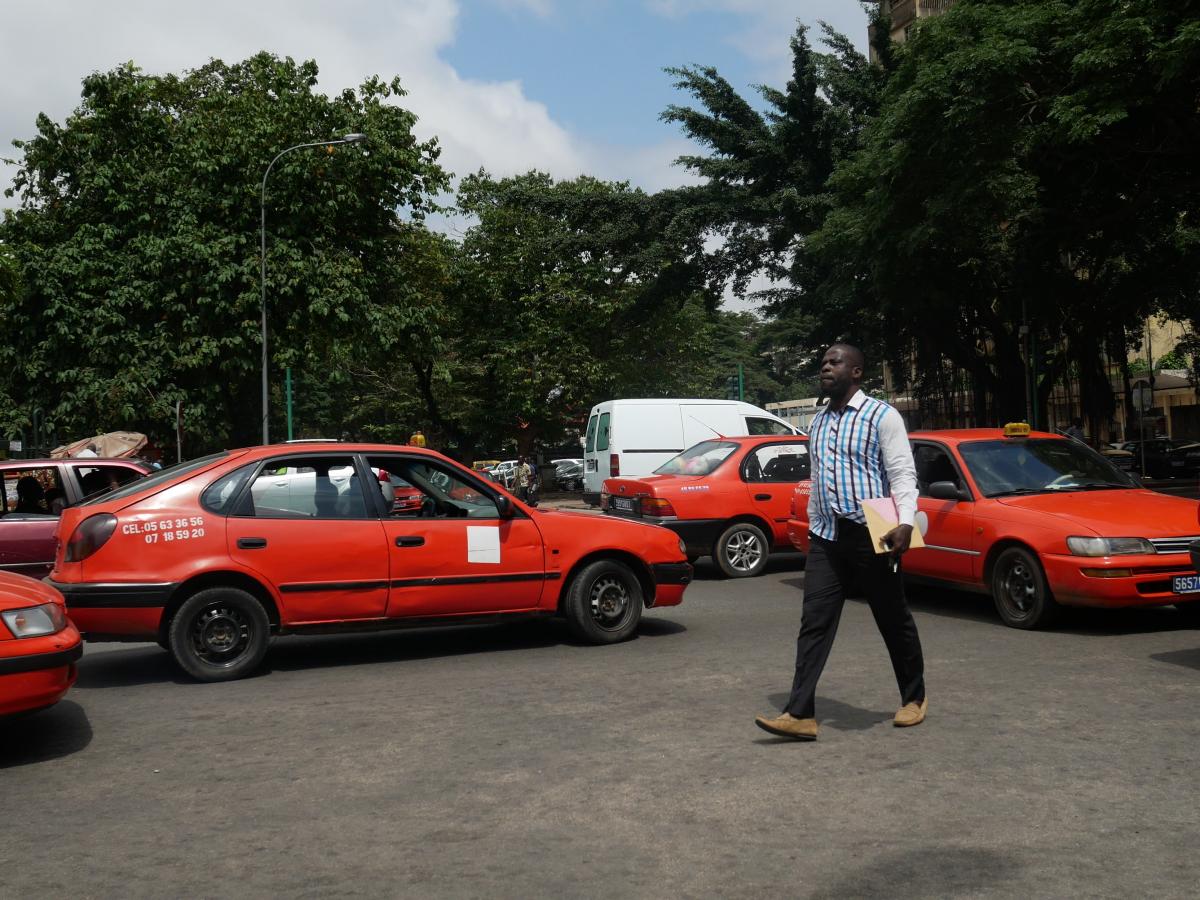 In Abidjan, the principal city of Côte d’Ivoire, Africa’s fastest-growing economy, the air is black and nauseating on the Boulevard des Martyrs in the upscale Deux-Plateaux neighborhood at morning rush hour. My mouth tastes of diesel already. The light changes. Orange taxis, yellow taxis, trucks, busses, vans belch exhaust in unison. Traffic surges; two lanes fracture into four as drivers maneuver anarchically to break through, and the jam gets worse. When the cab I’m in reaches the chokepoint, I see a man lying on his back on the pavement, head to one side, the wheels of a stopped car inches away. His overturned motorcycle blocks a lane. When I pass a half an hour later, he’s still there, and traffic is backed up to the Boulevard François Mitterrand.

This is my first time in Abidjan since 1969, when my father was posted to the U.S. Embassy in what are still considered Côte d’Ivoire’s glory days—a bloodless independence led by the patriarchal President Félix Houphouët-Boigny, the economy undergirded by strong prices for coffee, cacao, and lumber. It all came to an end after 1993 and the death of Le Vieux, the Old Man, as he was known. Ethnic tensions, corruption, and the collapse of commodities prices led to a ten-year civil war that pitted southerners loyal to then-President Laurent Gbagbo against northerners allied with his political rival, Alassane Ouattara. The war ended in 2010 when international forces ousted Gbagbo, who had lost the election. Gbagbo is now on trial in The Hague for human rights violations. But no one thinks that will sweeten the bitterness much. Both sides committed atrocities.

I came back in September to research a novel set here in part in the 1960s and to write about the country today. Côte d’Ivoire has stabilized politically under Ouattara. But I’m shocked at the disintegration of the pleasant city I remember and saddened by the ugliness and destructiveness of the new growth. Talking to Ivoirians, I hear profound relief at the return of peace, but also a litany of woes.

Rising prices, uneducated rural people pouring into Abidjan, university graduates who can’t find good jobs, young girls trafficked into work as domestics, willy-nilly destruction of the environment. Yet the economy is projected to grow at an 8.5 percent annual rate in 2016. Isn’t that great?

Meanwhile, I follow the U.S. election from my laptop. Back in America, Donald Trump spews econ-porn fantasies. Bring back coal, to hell with environmental regulations and zoning, ditch Obamacare, and cut taxes on the rich. Well, here is what unfettered growth looks like: monster traffic jams, unbreathable air, asphalt falling off the edge of roads, 70 kids to a class, a tin-roofed shack on a hill that gives way in the rain. Money’s pouring into the country, but that man on the road is still waiting for an ambulance.

People welcome me like a stray sheep returned to the fold. An art merchant, surprised that I knew which tribes made the masks he sells, jokingly asked if I was Baoulé, the largest ethnic group. Yeah, I bleached myself with Clorox, I said, holding out my white arms.

They think I’m French at first, and get excited when I turn out to be American. “L’Amérique,” they say: “Je rêve d’aller là-bas.” I dream of going there. “Je ne demande pas mieux.” I don’t ask for better. “Maybe you can give me your telephone number.” Then the conversation turns to Trump. When I lived here, there was one state TV channel. Now you can get CNN and TF1. Cab drivers listen to Radio France Internationale. They hear our Republican candidate for president is racist. They know about the black men killed by police. What’s going on in your country? they ask. Yet they still dream of coming to America. Somehow the vitriol hasn’t eaten through their hope.

On a sticky grey morning, high school students fill a hall at the Lycée Classique to hear representatives from five U.S. universities and a U.S. Embassy education program official talk about the Cadillac way to get to America: college. When the reps give the prices—$24,000 to $49,000—the room rocks, but then punches back with questions. “How much money can we get?” “Can I start taking the SAT in 11thgrade?” “Do you pay plane fare?” How can people from a country where the GDP per capita is $1,491 a year go to school in a country where GDP per capita is $51,486?

“Why do you want us?” asks one boy astutely. Diversity, the reps answer. Then we want you to go back home and succeed. They talk about scholarships for the best. They don’t mention that foreign students who can pay full freight are a revenue mine for colleges these days. There are rich people in Africa, after all.

A few days later, I’m in Treichville, perched on a wooden bench, eating fritters from a piece of recycled office paper and talking to the woman whose oldest daughter makes the fritters. She puts fish paste in dough and drops the white balls in boiling oil while her mother and I talk.

“I want to send my son to America,” says the mother.

He is 18 and has a long-distance trucker’s certificate. “If I had a place to send him to, to stay a little while he gets on his feet,” she says, a hint in her eye—the look of someone who bargains for a living. She knows it’s preposterously unlikely I would take her son in, but meeting a friendly American who lived in Abidjan 37 years ago is also pretty unlikely, so why not?

I ask her if she’s heard about the American elections and Donald Trump. All the racism and immigrant feeling he has brought out. She doesn’t seem to follow, so I say that it’s a terrible idea for her son to try to come to the U.S. without papers. The laws are very strict. In this environment, Congress won’t make it easier to come legally.

“Yes,” I say, laughing, concerned about sounding racist or condescending. But people I’ve met here are frank and warm about race.

Her younger daughter says something in their language. Her mother had told me earlier that they were Anyi, a southern coastal ethnicity.

“She says, ‘I like this lady too much,’” the mother tells me, and we all laugh.

“Do you have children?” she asks.

“My middle daughter is at the university, studying geography,” the mother says.

Now I can give her a little semi-honest encouragement that one kid might have a crack at a visa. “Forget trying to send your son to America. Send your daughter. Tell her to contact the American Embassy.” I explain that a woman there runs a program to help connect Ivoirian students with American colleges. Maybe her daughter can get a scholarship. Her chances are small, not to say infinitesimal, but a student visa is legit. The truck-driver son’s chances of legal status are nil. I think of the young African men one sees in New York selling umbrellas or counterfeit Louis Vuitton handbags on the street. What did they picture when they left home?

I catch a cab back to my hotel. Traoré, the driver, has six children. “It’s impossible to get ahead here. All the unpredictable expenses, a child gets sick, school fees.” There’s no health insurance.

He assumes I’m French. I don’t correct him. “Ah, madame, in France,” he says, “I could get a job as a security guard, lead a dog around. You can get a decent place and have enough left over to send money.”

I lived in France and know this is a poignant fantasy. I tell him that in Paris many, many newly arrived Africans live under the bridges, in tent cities along the Seine. That might be O.K. in May, not in November. You can die of cold. You need a coat.

“You need a coat,” he repeats solemnly.

“Ah,” he says. “Merci,” as if no one has ever told him this before, which I doubt. Maybe it’s different coming from une blanche.

He tells me how much French, American, and Turkish visas cost. His friends have gone the Turkish route. He’s been researching this. His determination worries me.

We’re passing the interchange where the police stake out cars and shake down the drivers for bogus violations. Two days in a row, vehicles I was riding in were stopped.

“See that. America is a country of law,” he says, angry. “My brother”—who’s in Chicago or maybe New York—“says the police don’t ask you for your papers once you’re in the country.”

Now I tell him I’m American. “That’s not true. There are immigration police, and they do sweeps.” I explain that immigration is a federal government responsibility, but that some states are hostile to immigrants, and state and local authorities try to make life miserable for them.

It kills me to talk like this. My father, his brother, and parents came to the U.S. as refugees from Nazi Austria. My kids were adopted from Guatemala. I’m ashamed to say “There’s no place for you in my country.” I’m ashamed to say we might elect a lying nativist authoritarian conspiracy theorist.  I give him my spiel about Trump. If Hillary Clinton wins, there’s a small hope some kind of reasonable immigration reform could pass. I leave out the problem of congressional majority. I don’t say that I myself am tempted to leave if Trump wins.

“My brother tells me that it takes years to get papers,” Traoré admits.

“Yes, and if you came in illegally, you’re cooked. They won’t give them to you, unless you have refugee status. But you have to prove you were persecuted.”

“You might have had a case during the war, say if you were a northerner under Gbagbo. Now there’s peace.” A taxi driver looking for a good job is on his own.