New Work for the New Year

This month we welcome Cassandra Cleghorn to our pages, presenting poems included in her first book, Four Weathercocks, which will be published by Marick Press in March. We’re also happy to be welcoming back TC contributors David Lehman, Jonathan Moody, and Sylvie Durbec. Lehman’s new book is Sinatra’s Century: One Hundred Notes on the Man and His World. Jonathan Moody won the Cave Canem Northwestern University Press Prize for his collection Olympic Butter Gold, published in November 2015. The book includes five poems first published in The Common. Jean Follain Prize-winner Sylvie Durbec’s poem “Shining Red in the Torrent” is offered here in its entirety, translated by Denis Hirson. An excerpt from the poem was published in The Common Issue 10.

To Saint Hubert, Wonderworker of the Ardennes, Patron of the Hunters and Mathematicians, Protector from Rabies

Eyes molten, fish-pale, snagged up
from where the leaf mulm churns

Her eyes, what stray sickness
what stillness turned stiff

I eye the pond, lips parting
Come Saint Hubert Come
why rush why wait why

red to white, brand me here and
here, why water why spit why dry

Keep me Keep me

from this bruised, this bruising
fur made to matter
***

the consonance, the math, the more than three
kinds of cry from each of my mouths, the quavers,
the swallowings

from the one slipping over the lip into snowmelt roil,
her whoops opening into an O of woe of worry of too
too sorry, so wet, so how? bowled over, gulping
then righted, face angled skyward while current yanks her, feet first,
frail bark, knothole mouth whisked from sight

of the vulture who humps the wind in the cleft between
her claws tucked close for lift, where I caught her,
where I lost her, how I tracked her, opening her mouth
with my tail, stroking her lips with a drop to make suck,
a ringing, a striking of beak on beak,
signs of succor, of distress tocsin, tocsin, tocsin

to the boy on the bank, unsinging his faith.
No, lips clamped, a sweetness seeping from between the brows,
No. She bobs, she floats, she needs no saving

I do the voices for my lover who straddles, who hovers
close to the curling, drawn down by the belly’s puff
and hollow, whom I beg now to please, please fill
my dreamspent mouth
***

Shining red in the torrent 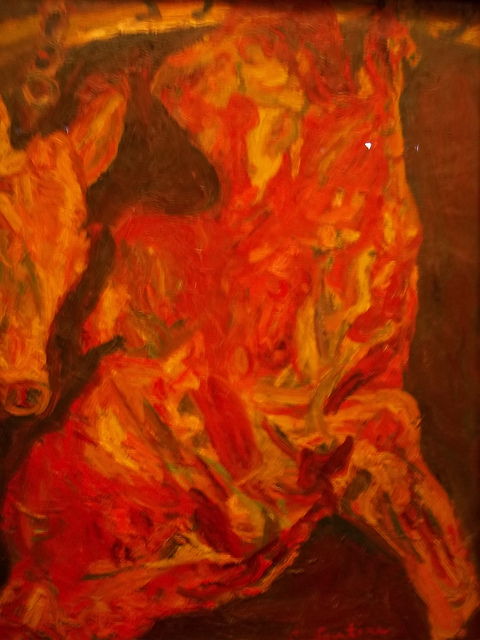 In the advanced seminar, the group examined sexual imagery in the context of sexual and class warfare. We pondered images of the naked body, the woman’s in particular, and the nature of exchange between the mons veneris and the male gaze. We consulted philosophers and writers from Aristotle to Mary Shelley to Norman O. Brown, but they were of limited use. Only the Marquis de Sade and the pseudonymous Pauline Reage proved indispensable. In one picture, the beautiful blonde nude, with her pubis shaved, is crouching beside a bicycle that needs a minor repair on a towpath in the woods some place where civilization is either an afterthought or a pipe dream. We decided that the bicycle in the picture stands for the phallus, and the division of mankind into beautiful woman and handy tool is dramatic in the lush verdant landscape. A less typical photograph that occasioned much comment showed a brunette in a leopard-skin bikini. She is on her knees. In one hand she holds a lighted cigarette while the other grasps a hairless nice-sized cock—as if the two items were interchangeable. “I like her red nail polish and her rings,” Lucy said and began a prose poem: “First she smokes his cock then she sucks her cigarette then she smokes his cigarette and blows smoke all over the place, including up his ass if he likes it there. Some women like it there.” People applauded Lucy’s spontaneity. Then the class moved on to a short video in which five young women, adepts of theStory of O, undergo training at the hands of butch guys who expect total obedience. While we came to no glib conclusion, it was agreed that sex and beauty go together better and more reliably than love and marriage.

Accusers and the Accused, Crossing Paths at Columbia

False reports of rape are rare.
The accused rapist, an architecture student from Germany, said
“My mother raised me as a feminist.”
He supports equal rights for women.
Three women have accused him of “intimate partner violence.”

One accuser takes a bed with her wherever she goes
Which doubles as her senior thesis
And, in October, students at more than 100 colleges
Carried a mattress or pillow to dramatize the crisis
Of sexual assault on campus.

The man in the watch cap sits on the steps of Low Library.
Most of his friends dropped him
Last year when Ms. Sulkowicz—
Or when the Spectator published his name.
Campus hearings have a lower burden of proof
Than criminal trials and he said he was not allowed.
But she did not press criminal charges.

None of them would ever get over it.