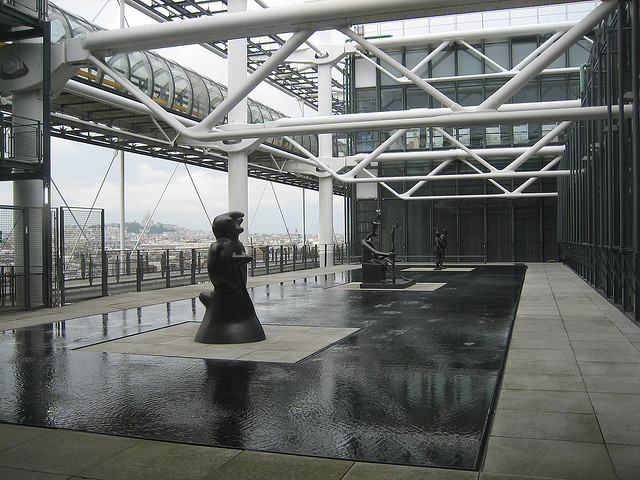 We are standing in front of Mark Rothko’s Black, Red Over Black on Red at the Centre Pompidou.

“I love Rothko,” says my companion. “I am not crazy about modern American art, but Rothko is different.” A painter himself, my companion is a talkative man behind whose frail body and white hair is an energetic, sometimes erratic mind. “Look,” he says, as he moves closer to the painting, the guard keeping a polite watch over us. “The way he has layered the painting—as if he were breathing it.”

He walks a little back, but I stay close to Rothko, only a hair’s breath of politeness, as it were, separating me from the painter’s labors: how Rothko has given a home to breath itself in the once-blank canvas, how breath has come into its own and become something else, process and effect at the same time. I move back some steps and join my friend. We don’t talk, and the museum suddenly feels deserted, abandoned even—a quiet as ominous and thick as the painting itself, so quiet, in fact, that I catch the curve of my own breath, listen to its heave, its intake and output, alive. From this distance, with this kind of attention, the Rothko looks different, at once created but also visceral, manipulated but spontaneous, holding us both in its complicated sphere.

We slowly make our way toward the exit. Water droplets have formed on the glass entrance doors, and when we step out and turn right, a web of colorful umbrellas and the slow fall of the rain welcome us. We continue walking to our parting place. From there, I meander for some more hours, the rain gentle and solicitous.

It’s almost evening now. The sight of rush hour Paris around Place de Bastille under the rain is arresting for its simplicity and casualness, as though the rain were part of daily life. “Yes, you can take an umbrella and a good trench coat,” my hosts had said earlier in the day when I was heading out, “but they really don’t help much.  It’s rain, you get wet, then you dry. That’s how it is.”

Rain seems so natural to Paris as though it were the city’s breath—the procedure and result, path and destination. Like breath, rain gives back what it takes, absorbs what comes its way and turns it into something else—the way people stand or street corners with their hips slightly at an angle, or the way they hold their shopping bags, or even the way they give directions to lost wanderers like me, and more.

Rain layers things here, saturates an already hyper-saturated—at times unbearably so—city with another turn of daily, vernacular beauty. Despite the occasional sudden downpours, the rain settles down to a tender drizzle as evening falls, as I walk toward the Canal St. Martin which is now a dark weave of discrete little ripples, surface and depth at once. I make it up the five flights of stairs to my destination, muttering an old, old American song about the rain as I reach the door breathless, but not quite.