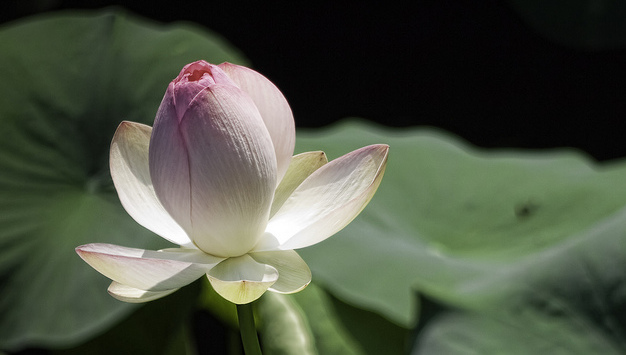 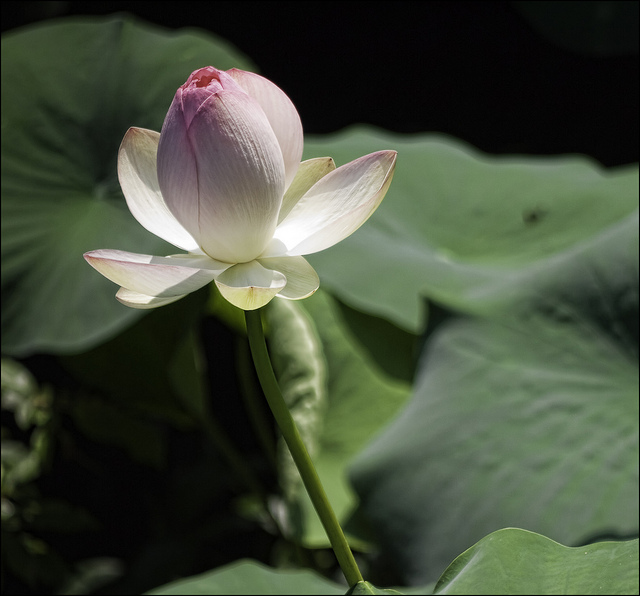 She watches a bulb press up
like a bubble rising; it stills a minute
then splits the mud
and a snake’s head emerges,
leathery neck dulled with dirt
after hibernating all winter,
coiled and cold, in the dark soil.

Another mouth rises and another
until the ground
has sprouted with snakes.

She wades out into the water
and her skin braces against the memory
of the body from which she won’t get clean.
She scours her calves with dry grass
until her legs show raw.

When a snake swims near,
plowing small furrows
through the flinty marsh,
she leaves her hand in the water.
Its tongue flicks her thumb
and it twists around her wrist.
Hades has done its worst
but nothing will complete
the half truth she took
or let her stay there,
far from the deliberate world.

Onshore, the earth is moving
with strewn and sprouting limbs,
all that has come back alive,
and she can’t stop the diminishing
sex has started;
she’s small and surrounded—
two worlds grasp her
and neither keeps her—
while all around her
birth has been allowed.

Katherine Robinson’s poetry has appeared in journals such as The Hudson Review,Poet Lore, and Measure.

Blank Song of the City Song

The world is always somehow lower than
you think it ought to be, lower down
I mean, it’s farther to the ground from here

than we want it to be. The city’s song keeps
the country awake, rumble-roar of trains,
the alarming sound of alarms re-arming night

all the whole night long. I can’t really sleep
here, am instead pinned to an opulent bed
in thrall, which is a word that means all

I need it to mean—paralyzed, stuck,
wondering just which part of the secreting city,
far below, far beneath, will come to me

for the last seductions of sleep. Will it be the heartbeat
of compressors, the train-brake plainchant of constant movement,
one kitten impatient in the wilderness?

The world is always lower than I want
it to be, its sounds in the basement of my ear,
a song in the wake of being awake up here.

Night. One lamp whitens the tin stall where
the mare has now exhausted her work

and only heaves; at her thighs, the foal kicks
free of the membranes. Hard, unballed, it looks

down and breathes, slippery, not ready to stand,
so like and unlike the horse in Kasper

from being everything, everything—sun, sex, shit,
vague curvature of ground, the measure—into

“a wooden toy”; how language took everything away,
the fluid spilled, and he had to begin again.

You took back your key to the back
gate on your Nederlander fairy block,

its narrow back alley not merciless—
still everywhere I feel you over me.

while I take notes on a grand scheme
of all things. Oh I still want your wiccan

protection, your brick walk, your watch
and restraint. Touch me. You were never

you—we know we are. You made me
a child. I won’t see you where we go.

So, Nature is a living temple whose columns
writhe to let a muddled phrase break free.
In this weird wood we are watched from every tree.
Whorls on the boughs mouth out to us. The solemn

silence writes scripts to bark. And in the distance,
wavelength indigoes, as vast as night,
run clear as ice-melt, pour out their solace in light.
Wherever you look, it’s all utterance.

which knows velvet and amber, benjamin and musk.
You go beyond the quiddity of things;
taste the jazzy keys of colour as perfumes sing.

Sometimes the world seems a living temple.
You move through side chapels, beady-eyed
by wise and symbolic birds, their calls
echo in arches, high stained windows; a shaft
of light haloes the earth around your feet.
You fall through the taste of nut and worm,
mulch, leaf-rot, incoming weather,
what’s borne on air, picking up the spectrum
of insect broadcast. Everything sharpens:
constellations of pollen motes; you zoom
to the focus of one tiny brain-buzz in the billions,
magnetic hair or sat-nav shell conductivity.
Banded by ions, tuned to the radio of sun and dark,
the world turns on the pin-point of a gnat.

Cliff Forshaw’s collections include Trans and, most recently, Vandemonian, which pieces together a fragmentary history of Tasmania.