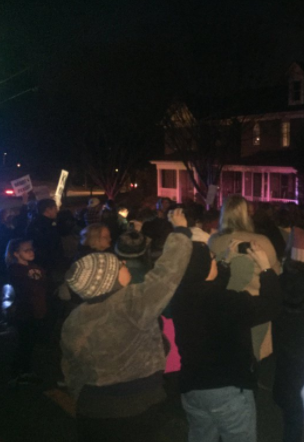 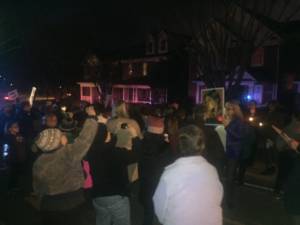 I hear the call, one voice:

Mr. Sessions has used the awesome power of his office to chill the free exercise of the vote by black citizens in the district he now seeks to serve as a federal judge. This simply cannot be allowed to happen.

Then the response, many voices in unison:

Mr. Sessions has used the awesome power of his office to chill the free exercise of the vote by black citizens in the district he now seeks to serve as a federal judge. This simply cannot be allowed to happen.

Light from cell phone screens illuminate clusters of people standing in the street. Around two hundred of us, young and old, parents and children, stand in front of our senator’s condo. The road is blocked on either side by police cars, who mute their lights so they don’t hurt our eyes.

The residents of nearby condos peek out of their windows nervously. We are a polite crowd, no one stands on the grass, out of courtesy there are no bullhorns.

The face of his condo is flat, shades up, lights off, nobody home. The Senator offers the same lack of response to letters. His phone number is a constant busy signal. E-mails go unanswered. When he returns home to Louisville, he is picked up on the tarmac so he can avoid protestors in the airport. He speaks only to reporters from behind a podium in Washington.

I grew up in the neighborhood and live here still. This street led to the drugstore, where I bought candy. I played hide and seek among the trees that line this road. I lived here in the 1970s when there were public service messages of ecology on television; before the climate was so politicized that people would argue about pollution, even as they coughed into handkerchiefs.

Neighbors and childhood friends fill the crowd. One woman is a lawyer now, poised and fierce. I remember riding to school with her as she cried over a new haircut she was sure would be made fun of by other kids.

I join the line to read. A young couple holding a baby read right before me. The mother’s voice is strong and full of hope. She hands me the letter. I read:

Particularly in the South, efforts continue to be made to deny Blacks access to the polls, even

where Blacks constitute the majority of the voters. It has been a long up-hill struggle to keep alive the vital legislation that protects the most fundamental right to vote. A person who has exhibited so much hostility to the enforcement of those laws, and thus, to the exercise of those rights by Black people should not be elevated to the federal bench.

I hear the words echo back to me. We might be whistling into the wind, but the line of people wanting to read continues down the block. The words bounce off the empty building and echo into the night. I join my neighbors in the street.

Ellen Birkett Morris’ essays have appeared in The Butter, The Fem, The Writing Group Book, The Girls’ Book of Love, The Girls’ Book of Friendship, South Loop Review and on public radio. Her fiction, poetry, reviews and interviews have appeared in Antioch Review, Ploughshares, Prairie Schooner, South Carolina Review, Notre Dame Review, and The Rumpus. She is the author of Surrender (Finishing Line Press), a poetry chapbook.