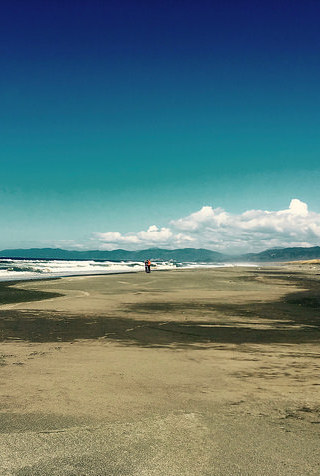 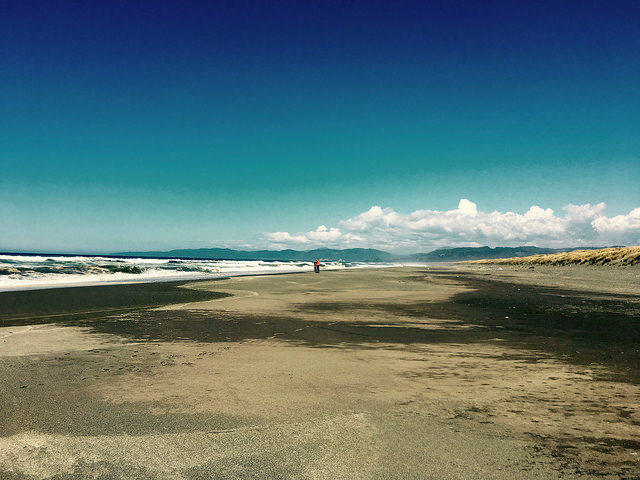 Sandy showed us how. She placed the shovel’s tip a few inches from a tuft’s base. Angled the handle back a bit, just enough to loosen the grass before she lowered, hand-pulling. This way, she explained, down to the source. Awards went to the biggest pile, longest root (you cannot burn grass off the dunes; the network just shoots back again), cleanest area too. Tawny tips waved in small breeze from the lagoon, off the lip of sea. But the grass is pretty, C said, and somebody murmured, agreeing. He traced the rake in arcs, looking down, but couldn’t swirl it far. European beachgrass (Ammophila arenaria) grows in clumps from rhizomes that spread four meters each year, so it’s no surprise beachgrass defines large stretches of Pacific coast. Pretty till you get a spine in your glove, E admitted, wincing. Until you get down close.

So we moved, bandanaed, low to the ground and followed each root with slow hands, first clutching masses of dry-rust spikes, taking care not to wrench. I cringed at the snap of a crackling tuft—no good in doing that, I told the team, calling them over. We have to be more careful, more thorough. I watched them run fingers along each chord under topsoil of silt and go—two, four, eight feet out before a group heave-ho! To eradicate means being ever at-the-source, putting down one’s foot before bending, before ripping into light. The sun blazed full and as we burned I knew the piles would burn too, those mounds of grass stacked like monuments, like expansion razed.

As a Californian born and raised twenty miles from the coast, I grew up assuming beachgrass was natural. Native. Looking back, I’ve no reason to think this; most of my surroundings were not native, not eucalyptus lining our block, car models hugging the sidewalks. Even my parents came west from elsewhere, just before my birth. Most things had a newness to them: new tech, new development, new arrivals.  Even the oldest buildings had to have survived the quake in 1906, again in 1989.

Given their own age, I thought these teenagers might balk at days of weeding. We’d come with groups from all over the West to create intentional community, work on construction and repair projects, and learn from a place unlike home. We thought we’d be raising things up. Digging, pouring concrete, erecting decks/ramps/stairsets, awnings against the sun. Which had started to beat stronger. Our piles towered tall as a regulation-rim, but looking in the opposite direction, the acreage felt endless. Z turned to our Tolowa Dunes guide—after we leave, won’t it just grow back? She pointed to the ground where a stalk of reed peeped above sand. Good eyes, cleanest sweep, and it won’t completely—so we yanked and we yanked and we played games of Contact, hoping it reseeds less.

You don’t have to go far to uncover the tangled roots of a place, one dependence stacked on another. In corners of this home state of mine, while roofing trailers at dead-end service roads where no way cuts through and no water runs—smelt rivers have been dammed dry—I tried to explain the satellite dish, the plot of pot nearby. How it’s really impossible to judge anything in all or any cases. And everyone’s an invasive, D reminded us, all a little squeamish. It’s hard to know who’s who, when intruding, intruded upon. Sandy explained that in coming West, along with murdering or removing hundreds of thousands of native people (120,000 in twelve years in Northern California, not to mention entrenched Rancheria enslavement), settlers also ushered in beachgrass, conquering vast swatches of dune, crowding out whole worlds.

No hordes of sawzall toting folks, truckloads of concrete, or board feet of lumber can suffice; none can bring back thousands of lives long-ago wrenched.  So maybe more than repairing roofs, it’s attention that we’re fixing. On what we’d rather not see. Weeding like this might even be a certain type of reparation: pulling out what invaded, uprooting our givens. As the afternoon slumped on, we paused for salty breaths. Sand loosened, ground shifted under our feet, as will layers of history. C pulled a tuft and uncovered beach buckwheat (Eriogonum latifolium), a bona fide native surging back as the seascape changes. Coral-colored pompoms shook off confetti flowers, lifting across the mounds and sprinkling patties of elk dung, drying. They caught in a mat of velveteen leaves—Phacelia argenta found only on these beaches, in this stretch of county. From which bees collect silver hairs to line their ground nests, not to mention the dips and divots of hollowed warmth where western snowy plovers lay clutches of creamy eggs—oh little lovelies, flit close, flit closer, show us what we do not know.

Cate Lycurgus’s writing has appeared or is forthcoming in American Poetry Review, Tin House, Gulf Coast, and elsewhere. A 2014 Ruth Lilly Fellowship Finalist, she has also received scholarships from Bread Loaf and Sewanee Writers’ Conferences and was recently named one of Narrative’s 30 Under 30 Featured Writers. Cate lives south of San Francisco, California, where she conducts interviews for 32 Poems and teaches professional writing.