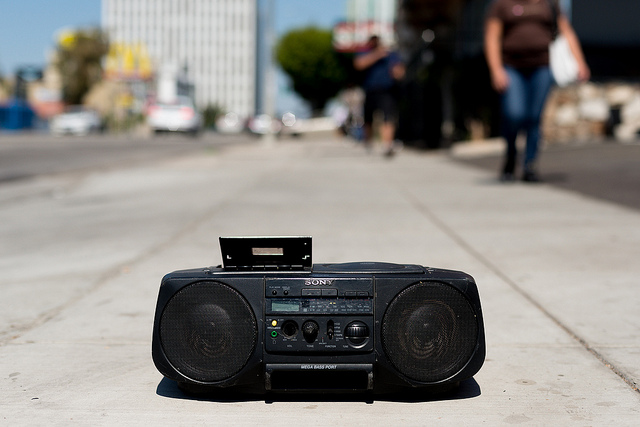 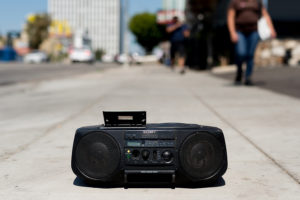 We were on a mission to see just how alive our lives were.
Remember how we danced in back of the bar
& were asked to stop? I told the bartender
I’d trade a carton of cigarettes
if she let us keep dancing. It worked.
Remember the guy with the tattooed face
& step-dancers in matching lamé?
On Avenue C I kicked the stereo on the curb
when stereos were big enough for a shoe.
It was the night the only money you had
was a one-hundred-dollar bill.
It fell into the bodega bag with the blackberries.
I washed it & laid it out to dry.
“Now you’re a money launderer,” you said.
Sometime later you would hail a cab & feel
the city’s anxious heart hammering the pavement.
How can you explain it? The ease of falling
up tiled stairs, our boomeranged voices
in a blue hallway, trying to catch acid rain.
That June, you hung a white sheet in your garden
for the Fellini party, wore a black wig
& called me Marcello all night.
I stirred Martinis with a pen.
The trumpet player practiced upstairs,
Fellini ghosted on repeat &
the cat escaped through the back window
cracked so thin, my fist barely fit through.
We sat on the steps making posters of the cat,
though what was lost would never be found again.

The Lost Art of Getting Lost

Once there was an Off. Now hands roll over screens like spells
cast too fast to notice the gaze, glaze hardening into lacquer.
Red Warbler: I’ve been waiting for you my whole life,
now you’re on the tree stump, sound as a compass.
Chin-down, scrolling, I search. When I look up,
your white throat has dissolved in clouds like a memory
of skywriting for fine finishing cream. No worries!
Buy the Bird Finder App. GPS routes the straightest path,
though a wrong turn would lead into a shy forest blinking
with purple berries, tiny violets, mayflower.
A set of high wings pour a shadow so thick it drinks the moss.
I never knew ink could fly. Each hawk, pure liquid.
Where did it go—that echo inside us, desire to not know, to float,
keep some knots tied? Afraid of getting lost I check my phone.
But I’m not holding a map at all; it’s holding me.
Google looses its grip; Earth quits Northing & Southing.
With no On-Off, we would hover & spin like lunar walkers;
As you reach for my hand I would realize that the freckle
I love so much—the one on your neck—
looks even better upside down.

Margot Douaihy is the author of the forthcoming book Girls Like You (Clemson University Press, 2015) and I Would Ruby If I Could.

The old man takes a box of cornflakes to his grave. Good enough for the boy, good enough for the hoary,  he says,  as he leans against  the headstone,  snacking,  watching snow fall. And wishing for prizes. He is attached to those years; those years have a way with him;  &  the  decoder ring  just out  of  reach reminds him  that the country graveyard, in which he lies, is no country at all, & yet, under the stars, the light is a homecoming. Light, at 186,000 miles-per-second, strikes the old guy who  is  now  up to his neck in rimed flakes. Then the gentleman-farmer Mister Frost is fast upon him.  Full of blank verse,  he  has something of  consequence to say about what is & what is not in the box.

Outside the Frost Library, the butterflies have  been  exterminated.  If  you let me into the library,  I will get some Frost. I will get woods, pastures, a conversation to brook. The Monarchs in field guides disregard my high sentences. They make me feel  like a snowman with Hairstreaks. I blurt out something orotund in my notebook about  ∞.  How  could  I  know the  height,  the depth of that floating fact?

To play the sonata in Toledo, I will need a piano.  And a peony in a vase to set upon the grand. And a pair of shears to snip the peony from the garden, an Ashtabula garden where rabbits levitate. And if necessary a machine shop for the fabrication of  snips—of a  similar temper as Chinese scissors.  I  also require a scale to weigh Youngstown steel, its heft, & quicklime to address miscellaneous  slag. To delve into ore,  as in aria, a piano is not a rational instrument. I would not be an Ohioan without the high-pitched rabbits.

L.S. Klatt’s poems have appeared in VOLT, Harvard Review, The Iowa Review, and elsewhere. His latest collection, Sunshine Wound, was published in the fall of 2014.

The Tree of Return

“King Agadja of Dahomey planted the Tree of Return in the grand Place de Zoungbodji, marking the point of last goodbyes. By turning three times around the tree, slaves could ensure that their spirits would return to their homeland after death.”—“Visiting Ouidah,” The Ouidah Museum of History

1980 something redlined L.A. suburb meaning all Black see everyone’s parents from somewhere-else-Louisiana-Mississippi-Alabama see Buddy on the manhole cover we call home plate waiting for Phil to throw a good fastball which is just a tennis ball and Buddy can’t hit so the pitch is irrelevant what matters is you sitting on the fire hydrant near Mrs. Franklin’s mailbox which is also third base and Erica standing next to you saying hey batter batter batter hey batter batter pink and blue beads at the end of her braids click-clacking like this moment could be a numbered panel in the Migration of the Negro but you don’t know anything about that Lawrence Negro yet what matters is the cop car at the end of the street what matters is Erica saying here comes the fuzz and you laugh with her then take your cue from the bored older boys who move their bodies as slow as they want unzip the street just enough for the fuzz to pass windows rolled down watching you watch them watch you like someone pressed pause except no one turns the song down don’t stop the cops round the corner and you all go back to before they showed up with their sorry slunk down selves Buddy says man throw me something I can hit and Erica with her hey batter batter because not one of you is fully grown but all of you have already learned the suspect magic of transforming threats to Black life into nothing but a minor interruption

Let me tell you what I know

I might not believe in God but I believe in the blue note Strange Fruit hip hop Purple Rain and the dub side.

I believe in I’ll Fly Away sung by a Creole man at my father’s open casket wake. I believe in the side dip and bounce when you’re dancing a second line. I believe in Louis Armstrong playing for Lucille in front of the Sphinx.

I believe in Miles not with his back to us but facing the soul-crushing thing for us.

I believe in the love Whitney was saving, Marvin Gaye’s healing, Gil Scot’s revolution, and I’m almost certain some salvation might be at the end of Mariah Carey’s high note circa 1988.

I believe in me myself and I and don’t forget what you got.

I believe in Aretha spelling our name, and in Nina because Mississippi goddamn here comes four women carrying the sununtil we make a joyful weep.

We all know the two
Fat ladies of 88.
But what of the pig’s
Tail in the Q,
The hockey stick of J,
The hairpin bends
Of S and U,
The mainsail
Of a yacht in A
Or is it a tepee
Or a rocket ready
For take off;
The scissors in X
Or a cross teacher’s
Vengeance, the rung
Of a ladder
In the H, a bee’s zigzag
Flight in Z,
The right-angled
L and bosomy
B and paunchy D,
The new moon of C,
The plunging neckline of V,
The body builder T
And skinny I
And the pouting oomph of O.
But there’s more—

Orange rind the skin
Of old aunties,
The bare twigs of grapes
Like arteries; the sweet
Nothings of two
Goldfish in a bowl,
And aubergines,
Those Greek helmets;
The eye-patches
Of pirates in the x-ray
Of a skull, a diabetic
Playing a game of dice
With sugar cubes;
The collective italics
Of windswept grass
Or devotees in a mosque;
The magnified eye
Of a fly in a fencer’s mask
And the epee an
Exclamation mark;
A city skyline at night
In the barcode of a book,
Midnight on an alarm
Clock in the pupil
Of a cat, the human
Brain a shelled walnut,
Oil boiling like
A rash of pimples,
Varicose veins a delta
Running across
Withered land,
And look closely—
The yogi is an
Ampersand.

Manohar Shetty has published poems in journals around the world, includingShenandoah, Chelsea, New Letters, and Rattapallax.