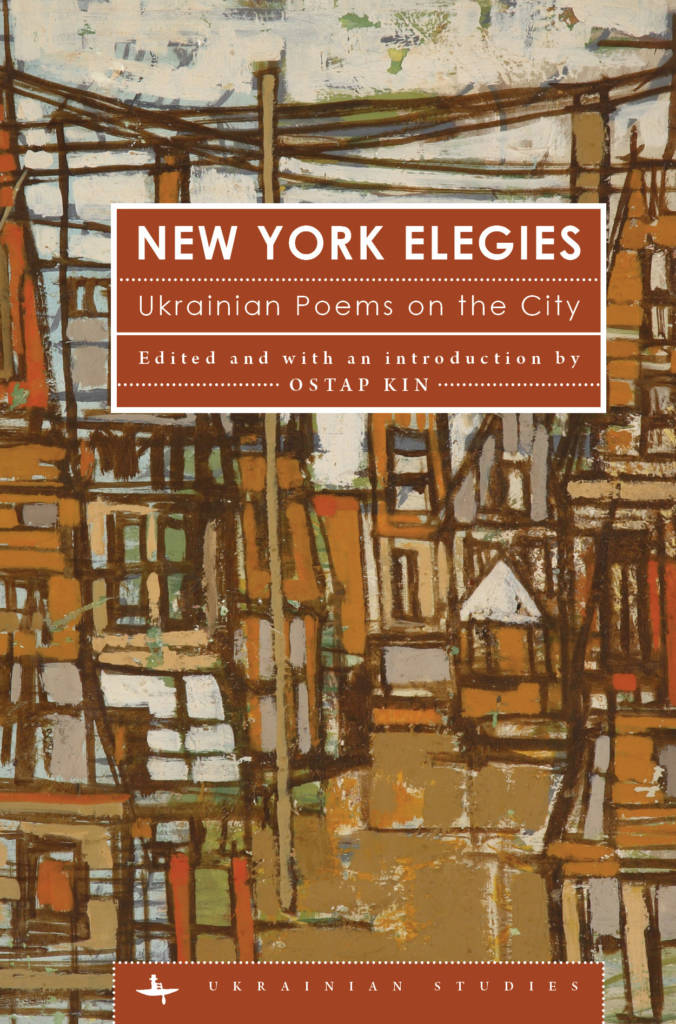 DIMA  |  “Broadway in the Evening”

I’m a man
So simple it’s funny—
The river flows crystal-clear between reeking banks.
The ages
Rustle their wings above me.
I melt down
Shivering and horror into courage in my forges,
I listen to the noise of the wind and cars, and
The breathing of a loving woman,
I see clouds, the land, chimneys, animals, and people;
I touch things; I inhale smells.
I am so simple it’s funny—
And my day blossoms like a lotus.

Hailed by bugles it sailed into the multitudinous night
howled with the motors’ French horns, it cast aside the rapacious boulders
so the alleys, the jaws of the markets
and darkness of passageways might shriek
after the flash that perished in the fog
after the flash that wilted at daybreak.
And the night beats out the minutes forged
by the glass facets of transparent buildings,
and o night, notched by the tides of the crowd,
crawl like a boa along the slabs of asphalt,
through the stony jungles; knock over the rocks,
so the slippery asp, filled with poison,
can crush the living life with its glowing belly.
O you defender of hustlers, bankers, and scoundrels,
o rustle of the covetous banknote,
o omniruinous God,
affixed upon the rocky heights
respected by the caciques on cold Wall Street,
you glide, glide like a dead-eyed idol,
along the abysses of faceless Broadway.
And the crowds, beasts, and children go silent
when the boa slinks toward its prey,
creeps along the steps of holy Babylon
softened by the neon rainbows,
drags its heavy, spiraled body
along the marble of the humming altars,
where the electric robot smolders,
brother to the living slave, to that captive,
who works namelessly his whole life
between the notches of the night shift,
slouched, blinded, and deaf,
born in a forgotten crevice,
among the iron, the stench of beggars’ shanties,
so he may burn out like worthless junk
in the cheap, local cemetery.
Is there yet a spring beneath that asphalt,
are there yet the living in the dawnless desert?
Does yet a nucleus of hopes twinkle
beneath the basalt behemoths?
Perhaps a steel-winged dream will yet take flight,
ring out like a geyser, so it may wave
in victory like the flag of the hurricane
and be consumed in a scarlet fire
like the zeal of prophetic flares?
You’ll still have your canyons of streets, Broadway,
your still-stone, still-alive heart will beat,
and, having met someone, dear friend,
in the sonorous time, when the green-noise
word, the strong word, will be overgrown with asphalt,
you’ll utter:
don’t pass on by,
be,
rise up!

Broadway in the Evening

Ads, ads, ads…
Above us, below us, on all sides…
Ads on every corner,
So many your eyes hurt.
Green
Red
Yellow
Bright
Pale
Colorful
Ads dance,
Ads sing,
Ads are like volcanoes
Putting off fire and smoke.
You walk along Broadway
In the evening
And it starts to feel creepy
From all those colorful stains…
How can a human being
Stand so many ads?

Tilted Libra burns in the sky, and
from this hemisphere Sagittarius looks like a cowboy.
The Moon appears abruptly like a terrorist,
not from her usual side, but around a foreign corner…
In this country I’m free, just like a letter
tossed into a drawer and forgotten until its time.
You can veer from your route and sit in the park on Riverside
until morning, just gazing at Brooklyn…
(Even before me, this country held enough unwelcomes—
in whose eyes I am just another white chick.)

Anonymity is freedom—even before an ID is stolen,
it’s extraneous, even at a motel—
what you tread is neither firmament, nor waters,
it’s what used to be the ceiling.
This is why the ocean is crossed
(and the Towers are set up, like pins to be knocked over).
I love this country because it’s nobody’s,
because it is not mine and I don’t have to love it.

I have dreams
in which bridges pass through me
their curved chords
pierce my heart and aorta
and protrude from between my ribs
Manhattan and Broadway
the black tunnels of the subway and
the sickeningly precise geometry of streets
eleventh street
should have some memory of me
maybe an imprint of my high heel
in the softened asphalt
from the time
I got stuck in the city for a moment one summer
though, it’s not that important
leave me a slice of
stale black bread
to feed the old pigeons in fall
from my transparent blue hands
with no hint
of my belonging to an
aristocratic race
what aristocracy do you mean
I still don’t know how to talk to them
in the language of pigeons
I only know how
to bite my lips
until they bleed
out of love
of course

My friend Stefan in the corduroy jacket is taking selfies
with the various women who are buying his book
he’s all smiles and so are they, happy to have caught him for a short eternity.
I am going over my notes in a coffee shop and crying. My daughter
stayed with me over the weekend; she is so big and independent,
yet I still have no idea what motherhood tastes like.

My roommate Diana is lying on her bed watching Dexter, from time to time
returning to her linguistics homework. She asks me, “native language,
what’s it for you?” and I answer,
“It’s a house with no room for darkness.”

Portland and Tampa and New York and all other cities big and little are but
containers of air filled with the past, those sealed Edens of memory.
Last night I dreamt I learned physics and chemistry and all the other sciences
and now I know all there is to know about every atom
they dance before my eyes and I explain each of their movements with
some law of the universe,

But, knowing everything, I cannot stop believing in god.

Translated by the author and Ali Kinsella

Dima (Diamara Khodymchuk; 1925, Romny, Poltava guberny) is a poet, actress, and prose writer. From 1945 she lived in Paris and worked in a theatre. In 1959 she moved to New York. She published six collections of poetry, prose, and poetry for children, as well as plays and essays.

Oksana Lutsyshyna (1974, Uzhhorod) is a poet, fiction writer and translator. She has authored two novels, a collection of short stories, and three collections of poetry. She also holds a PhD in comparative literature from the University of Georgia in the United States. Lutsyshyna currently is a lecturer in Ukrainian studies at the University of Texas at Austin.

Maryana Savka (1973, Kopychyntsi, Ternopil region) is a poet, writer, and publisher. She has published around ten collections of poetry including Boston Jazz (2008), children’s books, and a monograph about the Ukrainian émigré press in Czechoslovakia. A collection of poetry, Eight Notes from the Blue Angel, appeared in English translated in limited edition (2007). She runs the Old Lion Publishing House and lives in Lviv.

Oleksa Slisarenko (Oleksa Snisar; 1891, Konivtsov, Kharkiv gubernia–1937, Sandarmokh, Karelia region, RFSSR) was a poet and prose writer. He was co-editor of Universal′nyi zhurnal (1928-9) and was a member of the Panfuturist organizations Association of Panfuturists and Komunkult as well as Hart and VAPLITE. Slisarenko published collections of poems Poemy (1923) and Baida (1928), a complete six-volume edition of his works was published in 1931-1933. Slisarenko was repressed during the Stalinist era because of his ties with the symbolists and Panfuturists, and was subsequently arrested in 1934 and sent to the Solovets Islands, where he executed.

Oksana Zabuzhko (1960, Lutsk) is a poet, prose writer, essayist and scholar. Her works translated into English include a collection of poems and essays A Kingdom of Fallen Statues, as well as the novels Fieldwork in Ukrainian Sex and The Museum of Abandoned Secrets (2012). Among her numerous acknowledgments are the Global Commitment Foundation Poetry Prize (1997), MacArthur Grant (2002), Antonovych International Foundation Prize (2008), the Ukrainian National Award, the Order of Princess Olha (2009), Angelus, and many other national awards. Zabuzhko lives in Kyiv.

Ali Kinsella has been translating from the Ukrainian for five years. She holds a master’s degree in Ukrainian Studies from Columbia University. She currently lives in Chicago, where she also sometimes works as a baker.

Jazlyn Kraft is a poet, essayist, and student of literature with an undergraduate degree in English and Philosophy from Hampshire College. When she is not rearranging her own words, she particularly enjoys editing for others.

Ostap Kin co-translated Songs for a Dead Rooster, a collection of poems by Yuri Andrukhovych (2018) and The Maidan After Hours, a chapbook by Vasyl Lozynsky (2017). His translations have appeared in The Common, Modern Poetry in Translation, Poetry International, St. Petersburg Review, and elsewhere.