Poet Lim Sun-Ki was born 1968 in Incheon, Korea. He graduated from Yonsei University Department of French Language and Literature and received his doctoral degree in Linguistics at L’université Paris-Nanterre (Paris X). In 2006, Lim published his first collection of poems, Poem in a Pocket, and a second collection, Flower and Flower Are Swaying, was published in 2012. His third collection, Winter Tidings Fall on the Harbor, was published recently in August 2014 (Munhak-dongnae press). He is currently a professor at Yonsei University Department of French Language and Literature.
Translator Suh Hong Won was born 1962 in Hong Kong. He received a bilingual primary and secondary education, spanning Korea, England, and Hong Kong, and graduated with a B.A. in business administration from Yonsei University. He then moved on to English literature and received a Ph.D. in English at the University of Notre Dame. A professor in the Department of English Language and Literature at Yonsei University, Suh’s interests lie in English renaissance poetry, esp. Milton, rhetoric and translation, and English education. He is currently translating into English all three collections of poetry by Lim Sun-Ki.

The sky settled like ramen soup
I like a monkey pining for trees
Go to see them
Unknowable dry fruit drops
Hanging aplenty
Yearning for water
The fig tree
The deluxe taxi driver is on the street
Quarreling with his passenger
Woman shouting in a temper
On the way to the fig tree
Those many holes,
By what sorcery am I
A water bag pining for trees
My shadow tagging along like resin
A fig leaf let go of a branch
O the soul going to the black ditch,
As if one could hear the sound of flowing water 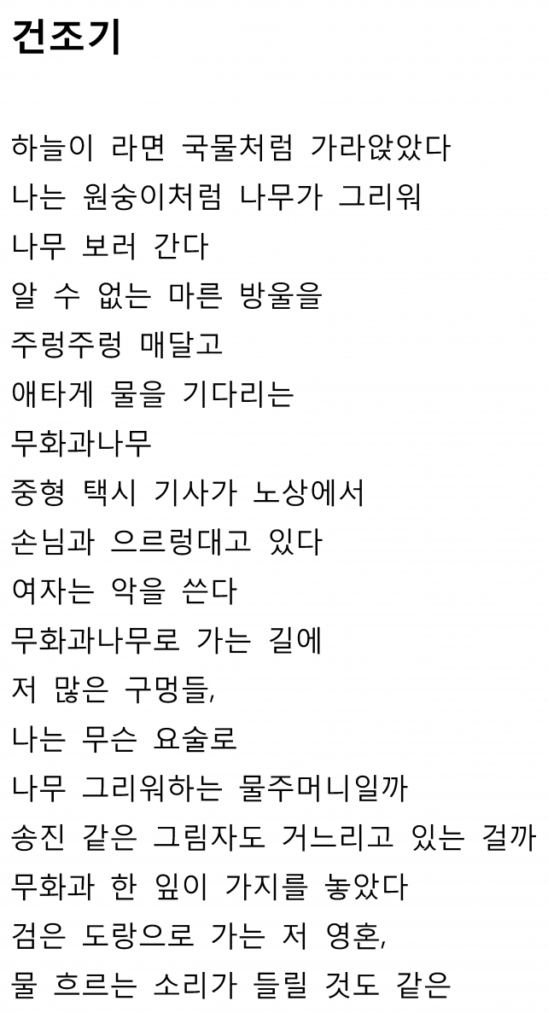 From Poem in a Pocket

You are a light, but fearful patient
You’re seriously ill, no you have a big
Hole in a corner of your heart Thorough
Someone’s drilled cleanly around it
I saw the winter Songjeong sea through it
A-A-An-Anyway you are lucky because early
It was discovered
What should we call it
Let’s just write lung disease
People think it’s been wiped out

I walked the no. 6 bus line, through sewage-
Bubbling suburbs, along the cosmos flowers
Wind cannot tie the hair of
The diseased poplar tree bus stop,
Birds around this time prefer the ground
Back to the tree, my frequency sent
The birds from the ground to the poplar
From the fruit box of the fruit vendor
I picked out some clementines
Why is the way home so long
The children of the poor are playing
Planting iron rods firmly in the ground,
And throwing the metal hoops
In general they miss the mark,
The air suddenly gets fierce
And sunbeams prowling round the lotus pond
All drown
How many sunbeams does the pond
Hold captive, when the wind finished his tuning
The cosmos opened their mouths
Shall I tell you a funny story, When I was
An intern, when I knew nothing about life
A time when I used to strip the skins of
Scores of mice for experiments, one of those
Can you believe it pattered toward me alive,
The desire to live, stripped of its skin you know

From Poem in a Pocket

From Flower and Flower Are Swaying

Lim Sun-Ki was born 1968 in Incheon, Korea. He graduated from Yonsei University Department of French Language and Literature and received his doctoral degree in Linguistics at L’université Paris-Nanterre (Paris X).

Translated from the Korean by Suh Hong Won.