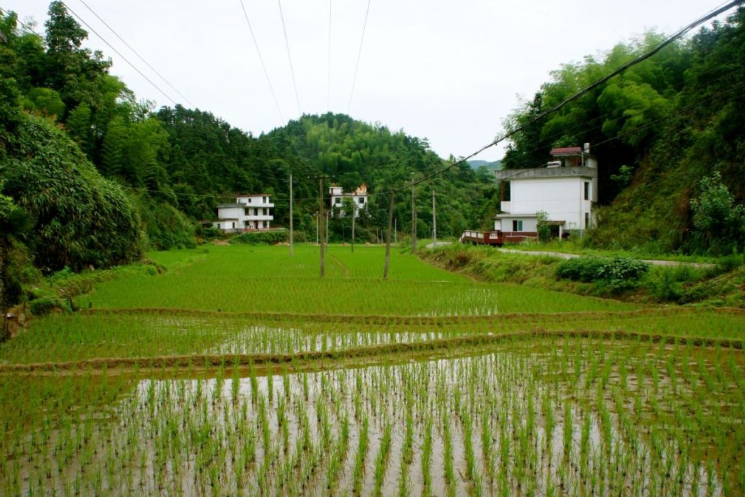 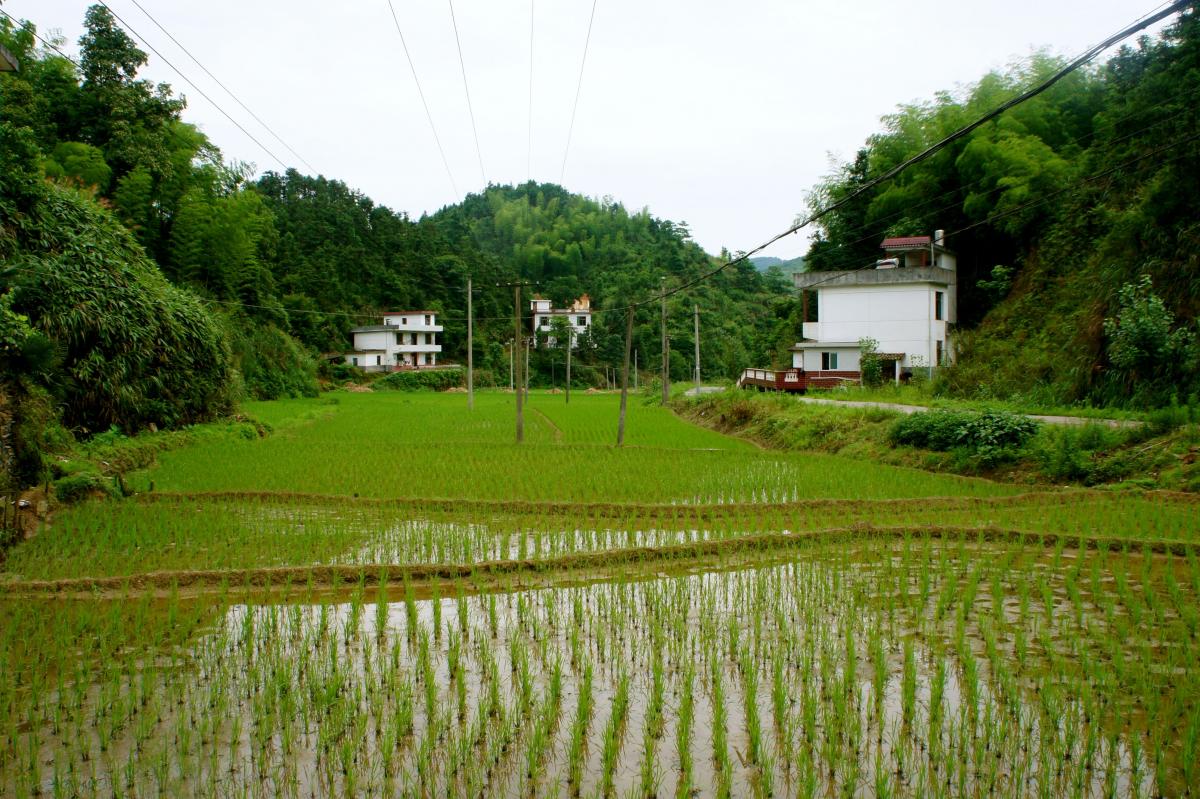 Every summer, we boarded the sleeper-train from Shanghai to Jiangxi and I squeezed through the crowds to claim the top bunk in a tight compartment shared with two strangers. The train always smelled of feet and instant noodles, and I loved the 16-hour journey because it was the only time I was allowed to have the MSG-flavored noodles. I rolled onto the scratchy bleached sheets that stuck to my sweaty body, and pressed my head against the cool metal bar to peek out the window, upside-down. Rocking to the train’s steady sway, I felt the soft, comforting crease of the cash my mother had sewn into my underwear against my thighs, in case of pickpockets. Meanwhile, she sat bent on the bottom bunk, purse clutched to chest, glancing up at my dangling head and legs, muttering, “Behave, you are a city girl.”

The train stopped frequently, and peddlers swarmed up at each station shoving plastic bags of tea eggs, sweetened teas, popped rice through the window. “Tea eggs! Tea eggs!” they shouted, tempting me, their voices louder and more slathered with unfamiliar accent at each stop. I whined back like a zoo animal, craning my neck, begging the peddlers—and my mother—for a treat.

Lao jia, my mother called Jiangxi, old home. I called it the birthplace of my mother and fireworks—the fireworks capital of the world that sprang from a monk’s accidental, exploding concoction a thousand years earlier. A foggy, mountainous province, home to Song Dynasty hermit-poets and coalmines and Mao’s revolutionary hideouts.

As the train descended into mountainous terrain, I scoffed at the villages made up of low brick houses and green paddies connected by miles of telephone poles. I pointed to the newer, white tiled houses scattered disjointedly in the fields and asked, “Are those public bathrooms?”

Even then, I had meant for my comment to be disparaging—I knew that they couldn’t possibly be bathrooms like the ones hidden in city parks, but I had to express the sentiment out loud with the performative self-awareness of a Shanghai girl.

My mother never picked up the Shanghainese dialect even after living there for most of her adult life, though she understood it well enough. Perhaps because of her resistance, I never did either. It sounded sharp, argumentative compared to the soft sing-song of her home dialect, the up and down intonations that made “shoe” sound like “child.” But nor did I pick up the Jiangxi dialect, shuffled between my relatives on both sides who neutered their words into the bland, standardized Mandarin for me. Without comprehension, I thought conversations in Jiangxi flowed from one mouth to another, like water.

I did understand, however, that I could not ask for water at a Jiangxi dinner table. Our tongues, they claimed, were made for spicy peppers. Reading the label of a jar of spicy paste out loud, I mistook  江  Jiang river, for  红  Hong red.

“Hong Xi people are not scared of spicy,” I enunciated each character.

I looked up at my mother, “Who are the red people?”

Of course, she could only be happy to hear that. Not only had she managed to escape from the backwardness and poverty of the countryside, she now had proof of her success in me—an extension of herself who fully belonged to the big city. Parading me around the village, her two older sisters in Jiangxi loudly pronounced me “thousand-dollar baby,” the Shanghai girl who returned every summer with bulging suitcases and little lace dresses and stockings. I held my nose whenever I smelled something “stinky” on the streets, and never played with my cousins because I didn’t speak the dialect; instead, I played with the ducks. The ducks followed as I dripped a trail of leftover rice from my pockets. While I, excited yet terrified of their orange beaks and beady glances, scampered ahead. Big auntie and little auntie laughed at my duck friends. “Are there ducks in Shanghai?” They asked. Animals were animals here, and children did not play with their food.

Yet, I had, defiantly, stubbornly, inherited the Jiangxi taste for spiciness—smothering my food in spicy paste, panting and sweating in exaggeration after a meal, loudly resisting the water, and wiping the red oil off my lips like lipstick onto a napkin—while my mother had somehow lost her taste for it. Her tongue numbed like the dialect that slipped away from her. Her sisters wondered at my spicy tongue, then made fun of my mother’s bland accent and taste and asked her for money.

Fireworks, here, were cheaper than water. While the night sky in Jiangxi, like Shanghai, held no stars, it was lit by fireworks. Stalls peddled them at all hours; we bought and lit them whenever the inclination struck. Jiangxi people marked birthdays, guests, holidays, but mostly the boredom of long, mosquito-ridden summers with the lighting of fireworks. Even during the day, fireworks exploded in bursts of smoke and sound. Conversations carried on with barely a flinch; no one bothered to look out the window.

So I, like the rest of China, would forget that fireworks could kill, until my mother would read aloud a newspaper headline: “Thirteen Dead in Explosion.” The headlines interchanged numbers and locations, firework factories for coalmines, six women for twelve men. In my mother’s village, women worked in the firework factories and their husbands worked in the coalmines—everyone had someone to mourn. Their children were left behind to play amongst themselves and to hobbling grandmothers who paid more attention to the ducks than their grandchildren.

My mother did not forget. Jiangxi people lit fireworks in their sleep, but they knew the dangers of gunpowder like their tongues knew spice. Yet, the women and their husbands continued to troop out of their houses into the factories and coalmines for six month contracts, not despite the danger, but because they hoped the danger would release them back to their lands, and drive their children away from the land into colleges and cities and neatly pressed jobs.

Every summer, my mother returned to her old home with me, and the women and their husbands, too, returned home from the factories and coalmines. The gunpowder had eaten into the women’s fingers as they packed the tubes side by side, muzzles pointing into the sky, breathing the red powder into their lungs—now, they set off fireworks in the streets, spitting watermelon seeds into the gutters, wiping spicy oil from their lips with their palms, slapping at mosquitoes and crying children who barely recognized their mother’s burning fingers.

Soon, they left again and returned in the winters, when, instead of fireworks, smoke rose from the snow-covered village. The husbands pocketed bits of coal to bring back to black smoky rooms, to fires burning atop sweet potatoes and beneath hanging pig thighs. New Years, in Jiangxi, meant snow and spicy smoked meats, warmed by the loud reunion of lots and lots of family.

My mother, too, longed to return to Jiangxi every winter during the cold silence of Chinese New Years, when city streets were emptied of dialects. Migrant workers closed their restaurants and shops to go back to their firework-making mothers and coalminer fathers. “There’s no feeling of people,” she complained to me, “You don’t know the feeling of New Years.” It never snowed in Shanghai, just went from cold to moist to moldy. But it was the only time that allowed fireworks, and the city blasted grand synchronized displays over the skyline. We watched from our windows, the fireworks dim and silent against the yellow smog and neon high-rises.

She never took me in the winters because New Years were to be celebrated at home, and home was now Shanghai. She sat at the table full of my father’s relatives, laden with sweet and oily foods, and listened to the quiet, polite conversations laced with coughs of sharp Shanghai tongues. “Where’s the feeling of people?” she wondered, and told me stories from west of the river, about her father who mined coal, and her mother who made fireworks.
JinJin Xu studies English and Art History at Amherst College.