Poems by LORIS JACOPO BOLLINI and art by ANDREA POGGIPOLLINI, with an introduction by MARTHA COOLEY

Andrea Poggipollini is a Bologna-based artist who works in multiple media.  His summer-long installation “Omnipresence” in the medieval borgo (walled village) of Castiglione del Terziere in Lunigiana, Tuscany, featured sculpture, photography, video, and excerpts from poems by Loris Jacopo Bononi. Bononi, an Italian writer (earlier in his career, a doctor), writes poetry and prose; his work has been lauded by Pier Paolo Pasolini, among others. He is the author of Trilogia (Diario postumo, Miserere dei, and Il poeta muore), Libri e Destini, and other texts.

Viewers walked through the borgo to encounter Poggipollini’s and Bononi’s collaboration in unexpected places: on placards on walls high and low, windows, on the ground, and in cellars. Among the installation’s elements were life-sized sculptures of human figures in black or white—kneeling, standing, sitting—which materialized as unexpectedly as phantoms on stone walls, in a bell-tower, and on the balcony of the village’s once-grandest house, now abandoned. In a passageway between two buildings were photographs by Poggipollini of sculptures he’d previously made, to which Bononi’s poetry-excerpts are an implicit response.

Translations and photographs by Martha Cooley and Antonio Romani

Da una vetrina viene a me 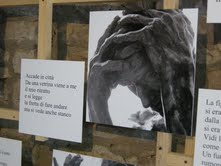 It happens in the city

From a window my own portrait

and the rush of making things happen

but visible too how tired 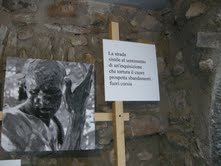 that tortures the heart