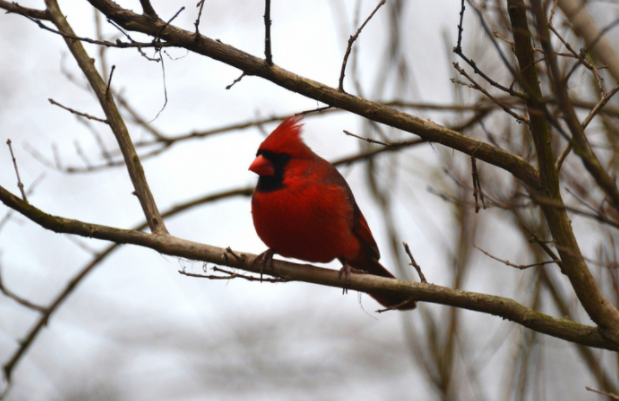 Without the backdrop of leaves and scat,
the possum playing possum, its mate
the same. Without the tip of the road,
its black pitch wound like a widow’s wail
through the wet trees. Consider the undergrowth
and what hides there. The brown bristle
of the hedge. The singular call of a bird
its beak red-tipped, its feathers black
as a pool in the moss. Without the reflection
of a dog’s tongue in the water, or the stone
lobbed over the surface in order to see
the surface ripple like a skirt being pulled up.
Only the city, present, in the face like a shout,
like a lie yelled as if to assert its veracity, but
everyone hearing it knows it’s just not true.
I reenter the city still standing, its back turned
to the forest of bears and bluing brush, and
the inedible red fruit, the berries hung just at the mouth’s
reach, that beckon easily as they would poison. Me
and the city that wraps me in its leather coat and spikes,
tragic ink, and garble: vodka after vodka, after
shot after shot, my slurred proclamations
of love where love doesn’t go far, but lays
dead as a clever rodent. In the alleyways
I kick my boots against a crumbling wall
that will always be crumbling but never fall.
The smell of sausage spilling from a factory
of sausages assuages the memory of a canopy
of green, and the verge pressing into my waist
like the hands of a man eager to take
my measure, the heat like a cologne
emitted from the skin, like a fear of
the wild before entering another, wilder.

Vievee Francis is the author of Forest Primeval, Horse in the Dark, which won the Cave Canem Northwestern University Poetry Prize for a second collection, and Blue-Tail Fly. Her work has appeared in numerous journals including Poetry, Waxwing, Best American Poetry 2010, 2014, and 2017, and Angles of Ascent: A Norton Anthology of African American Poetry. She was the recipient of the 2016 Hurston/Wright Legacy Award.

ShareTweetEmailPrint
2017 Issue 13 Issue 13 Poetry Vievee Francis
On Leaving the Mountains and Coming to the City I Thought I Left For Good04.15.2017

Unique Craft Masterclasses with The Common

Each class is two hours long and includes a craft talk and Q&A with the author, generative exercises and discussion shared in breakout sessions, a take-home list of readings and writing prompts, a free “Behind the Scenes” session (date TBD) about what literary magazine editors look for in submissions.

Poetry and Democracy: Part One

Lawrence Joseph and Vievee Francis
He will dream/ into existence a raft, a rocket, a fort of mud./ From a cloud/ a gift of horses./ From the sandcastle and moat,/ kingdom and cause. Every boy knows he is a lone king,/ that above hover dragons/ from which he cannot withdraw

KIRUN KAPUR, MARÍA LUISA ARROYO, OCEAN VUONG
Begin with a seed. Begin with the father and the mother, your first Adam and Eve. Begin with what falls from the tree: you can live on bruised and sweet. Begin with a monsoon breeze, begin with a flood, begin with miles of silk and mud and the wings of cranes...