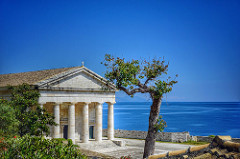 By DANIEL TOBIN
Despite having no lungs and unable to breathe, the second
head displays signs of independent consciousness….

The first fiction is
I’m talking to you at all,
the more amorphous
of my own Janus head, the god
alive and compassing
what has gone and what
is coming, though
which is which is
hard to say. Did I say
my own? I meant ours, my
sister twin, the comelier
countenance of our mirror
linkage, orbital, locked,
each turned away one
from the other, turned
outward each to our
own horizon, inverted
reflections on the knife-
edge of a pane. Don’t be
distracted by my lack
of a body, the froth
at my mouth, my eyes
circling in their sockets
like wobbling stars, I, too,
keep counsel in our shared
skull, the woven vessels
of our thoughts, the mutual
current of our separateness.
Her limbs, her length, are mine,
wayward from me outwardly,
and if you call me the one
who follows, dependent,
the monster in the blood,
think of your own, the seamless
bonds inside your boundaries
hidden familiarly; think
how each breath lives
off another’s, so that in
another world, another time
we two together, one, would be
divinity in human form,
holiest, a double sun, the crown
of the temple’s plenum, and I
something more than a mask
you cut free for love
of the other, who of course
will die without me; the visage
in the bottom of the tray
you’ll bury to salve yourselves—
the scar, the scald, the waste,
the link, the lack: your secret face.

Daniel Tobin is the author of seven books of poems, Where the World is Made, Double Life, The Narrows, Second Things, Belated Heavens (winner of the Massachusetts Book Award in Poetry, 2011), The Net (forthcoming, Four Way Books, 2014), and From Nothing (forthcoming, Four Way Books, 2016), along with the critical studies and Passage to the Center: Imagination and the Sacred in the Poetry of Seamus Heaney and Awake in America.  He is the editor of The Book of Irish American Poetry from the Eighteenth Century to the Present, The Selected Poems and Lola Ridge, and Poet’s Work, Poet’s Play: Essays on the Practice and the Art.  His awards include the “The Discovery/The Nation Award,” The Robert Penn Warren Award, the Robert Frost Fellowship, the Katherine Bakeless Nason Prize, and creative writing fellowships from the National Endowment for the Arts and the John Simon Guggenheim Foundation.

J.D. SCRIMGEOUR
You’re floundering in flashes of light and dark, / so after a few minutes you scoot inside / because January’s cold, and ask your wife for help, / embarrassed you can’t do even this simple task. / She peers over her glasses, studies the tape, / then returns it unstuck, separated...