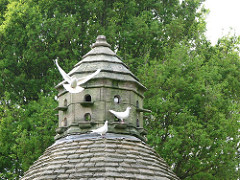 By R. A. VILLANUEVA

When the new year came with whole flocks of doves
and jackdaws falling dead upon the fields,

landfills and roofs blackened with wings; the lakes
silvered with drumfish, their bellies bloated,

eyes thickened to milk. The ministers sang
of seals and omens, sang of prophecies

above tambourines and horns. For starlings
they cried, for spiders flooded into trees,

for the quakes and fires. Last night the moon
hovered like a scimitar over an East

River bloodied by the air. We took planes
for constellations, named strobes for comets;

we watched a crowd kneel before a hollow,
calling Mary, Our Lady of Sorrows.

from knots weathered open, bark crowned with sap.
They bow Salve, Regina at the foot

scars in the trunk. Hers is the form they hope
we see first, an image we know we won’t

hold holy or miraculous. Picture
this: what appears here is something of the

body. Not Her eyes or mouth dressed with stars,
not hands in coronal loops, but that part

of his wife St. Joseph would never see,
that place touched once by the Holy Spirit.

R.A. Villanueva is the author of Reliquaria, winner of the 2013 Prairie SchoonerBook Prize. He is also the winner of the 2013 Ninth Letter Literary Award for poetry. A founding editor of Tongue: A Journal of Writing & Art, his writing has appeared inAGNI, Gulf Coast, Virginia Quarterly Review, McSweeney’s Internet Tendency,Bellevue Literary Review, DIAGRAM, and elsewhere. He lives in Brooklyn.

Listen to R. A. Villanueva and Daniel Tobin discuss “Pareidolia” on our Contributors in Conversation podcast.