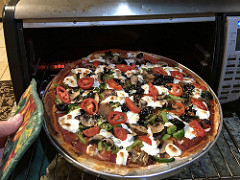 ShareTweetEmailPrint
By ZEINA HASHEM BECK
Mama made the best Lebanese pizza: soft, thick,
with olives, mushrooms, ash’awan cheese,
and ketchup instead of pizza sauce.
But that night there was something
different about it. We knew
one should never complain
about home-made food,
so we crunched and swallowed,
washed it down with Pepsi,
until she heard the glass shards
under our teeth. She opened the oven,
found out the light in there had
burst. The doctor on the phone
said the only side effect
would be our asses lighting up
at night. It was a practical thing, after all,
to turn into lightning bugs
with the electricity gone
from midnight until 6 AM.
Zeina Hashem Beck is a Lebanese poet whose first collection, To Live in Autumn (The Backwaters Press, 2014), has won the 2013 Backwaters Prize. It was also a runner up for the Julie Suk Award, a category finalist for the 2015 Eric Hoffer Awards, and has been included on Split This Rock’s list of recommended poetry books for 2014. She’s been nominated twice for the Pushcart Prize, and her poems have been published in various literary magazines, among which are Ploughshares, Poetry Northwest, Nimrod, The Common, Mizna, Rattle, 32 Poems, Mslexia, and Magma. She lives with her husband and two daughters in Dubai, where she regularly performs her poetry and runs the poetry and open collective PUNCH.
[Watch Zeina Hashem Beck read her poem live on YouTube.]
[Purchase your copy of Issue 10 here.]
ShareTweetEmailPrint
2015 Issue 10 poetry Zeina Hashem Beck
Pizza with Light Bulb11.01.2015