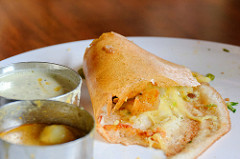 From the kitchen of Bijoya Chaudhuri
Handed down to her son, Amit Chaudhuri

Author’s note: I grew up in Bombay on my mother’s magnificent
version of East Bengali food, a cuisine reinterpreted and perfected—and often
added to with original recipes—by my grandmother in Sylhet and then my
mother in her decades in Bombay. The recipe below is included in my mother’s
Bengali cookbook, published in Calcutta in 2010, and translated recently by
Chitralekha Basu. But this is not a dish that represents East Bengali food; it
comes out of our contact with Bombay, and is not only my mother’s version of
a well-known Parsi dish: it is her response to my craving for it. Its main feature
is the chutney in its name, made with coriander and mint leaves and coconut
pulp: the seaweed-green condiment is one of the most delicious to be found in
the Konkan region, imported, here by the Parsis, and then by an East Bengali.

Cook’s note: This is, in fact, a Parsi dish, a well-known Parsi delicacy. I have
picked up the technique of cooking this item rather well because of my long stay
in Bombay and exposure to Parsi culture. In Bombay they slit the stomach of a
large pomfret, fill it with stuffing and cook it whole. Here in Calcutta pomfrets
come in a much smaller size. So I cut the fish up into pieces and use them to
cook chutney masala. It tastes just the same as the original preparation, so no
regrets. Here’s the recipe.

Recipe
Soak the slices of fish in water mixed with a little vinegar for half an hour,
to get rid of the fishy smell.

Change the water a few times as you rinse the fish.

Mix oil with all the spices and pastes, sugar, salt, and lemon juice, and marinate
the fish in it.

Now put a wide-brimmed wok on high heat and add the fish with the marinade.

Cover and turn down the heating to a degree just above the lowest point.
Keep for 20–25 min.

Turn the slices over a few times to ensure these are cooked evenly and to
the right degree. Allow the juices of the spices and pastes to enter the fish.
If the marinade looks too dry, sprinkle a little water and add vegetable oil.
Check the marinade and notch up the sweet or sour content according to taste,
if you like.

Amit Chaudhuri is the author of six novels, the latest of which is Odysseus Abroad. He is also a critic and a musician. His many awards include the Los Angeles Times Book Prize for Fiction, the Commonwealth Writers Prize, and the Infosys Prize for outstanding contribution to literary studies. He is a Fellow of the Royal Society of Literature.