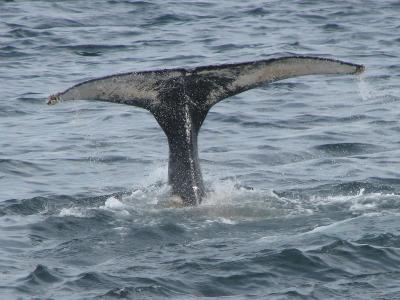 I can only assume that Stellwagen Bank is a financial institution. Perhaps a progressive Norwegian firm with a board of directors that is, by law, at least fifty percent women. The kind of bank that would sponsor a football club in Trondheim and a chain of internet cafés in Toronto, as well as a tour of the National Marine Sanctuary from Provincetown’s MacMillan Wharf. A global thought leader. A benevolent presence at Davos.

Stellwagen Bank is a sandy, submerged plateau, nineteen miles long and roughly six miles across at its widest point, munching Pacman-like at the eastern edge of the Massachusetts Bay. Its National Marine Sanctuary is an 842 square mile protected area, stretching from three miles south of Cape Ann to three miles north of Cape Cod, where commonwealth waters end and federal waters begin.

It’s where the whales are. 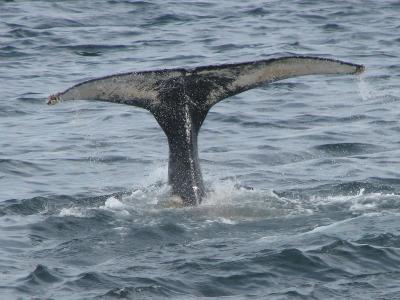 The Dolphin Fleet can speed you there in about an hour’s ride. But despite the blue spring sky and the $44 ticket and the company’s promise of guaranteed sightings, I don’t really believe I’ll see any whales. Why would I? They’re endangered and vaguely mythical. My only other expedition, several years ago in Newfoundland, produced vomit and not a single whale. One can’t just expect to see a leviathan in this life, not after human greed has driven their numbers down and scarred the bodies of those that remain.

I imagine a speck of something black and smooth in the distance: a beast like a seedling from afar. Maybe that’s all I’ll get. And wouldn’t that be something? Wouldn’t that be rare?

As we motor out, we look at photo albums of Buckshot, Anchor, and other cetacean celebrities, read pamphlets on who is critically endangered and who is merely protected. By the time we round Race Point, we are moving much faster and I am willing myself past intimations of seasickness. I look fiercely at the water, training myself to spot a significant disturbance. “They’ll tell us, won’t they?” I keep joking to my fellow passengers. “They’ll make sure we see the whales?”

Then, eventually, we are somewhere and the motor is off and we are no longer pitching so turbulently. The on-board naturalist is in his crow’s nest, his voice everywhere, and everyone is clinging to the port side rail.

“Oh, yeah. We got some,” a man says, his voice rising with the calm excitement of experience.

He points. There is froth, and a gathering of sea gulls. Other boats lurk nearby.

The woman to my right laughs. “I said the same thing.” She nudges her husband. “And he’s like, ‘Are you blind?!’”

Just before I can completely fear that I am—because blindness to the rare and miraculous is one of my greatest, vaguest fears—we’re rushed into a cacophany of humpback sightings. Suddenly, the water seems made of whales, as it might once have been before Ahab, back when whales were so plentiful, Cape Codders could harpoon them from land.

There is a baby playing at our side. A baby that weighs two tons.

The naturalist reports that birds have strong vision in the blue-green spectrum, so they can sense when a whale is about to surface with a mouth full of water and food. He tells us to watch the gulls, which are scavengers; they like to grab up the fleeing and wounded fish the whales didn’t quite manage to filter down.

Sure enough, the gulls flock noisily at nine o’clock, twelve o’clock, and one o’clock, and I finally understand the term feeding frenzy. In fixing our own hungry eyes upon them, we succeed in conjuring from the ocean pairs and trios and quartets of humpback mouths, all gaping like friendly dumpsters, offering their leftovers to the birds. Their heads are blunt and barnacled, their mouths baleened, their bodies pumping in weight-defying motion. All around us, silky, superhuman backs crest like waves. What is gravity to these underwater flyers, who drag their tails the way athletes drag their toes? One is missing half its fluke from a trauma long ago. Another fluke jets straight up, stained white as if from salt. There is even a lone seal, bobbing importantly, happy to be playing with the big kids at last.

For a cold, breathless hour, we hurry back and forth across the deck, straining to see it all and to see it again. To see more, more, more. By the time we turn around there is not a person on the boat who has not seen a whale. Who has not seen fifteen, twenty, even forty whales at lunch.

Everyone is quieter on the ride back to town, none of us quite able to accept the power of an expectation fulfilled. We are sapped of energy, our backs aching, our necks and jaws letting go at last. Remembering my seasickness, I sit staring at the horizon, thinking every wave another whale, until I’m too cold to remain on deck. All over the café, children are sleeping in their parents’ laps. In so many ways a child myself, I slide into one of the booths and join them, my cheek flat against the hard table, my mother-in-law’s hand on my back. It is strenuous work to want something rare and get it, no less to understand what you got.

Katherine Hill’s first novel, The Violet Hour, is out from Scribner this month.