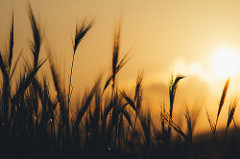 In seventh grade, your friend Megan invites you to go raiding, which means sneaking around in dark clothes and throwing feed corn on other people’s houses. This is rural Pennsylvania, a small town of rolling fields and old steel mills. It’s fall, cold. The point is trespassing, minor vandalism, the fact that you are twelve and living in a place where nothing ever happens.

You start at Megan’s house in a damp wooded valley not far from the river and walk toward the highway. It’s dark out, though probably not any later than seven or eight o’clock. Back here, in her neighborhood, there are steep hills, one after another, and the houses are set too far back from the road for an easy escape, and so for a while, the three of you—Megan, you, her neighbor-friend Derek—just walk. You pass a horse farm, a handful of streetlights, and then the houses get smaller and closer together. Just about as soon as you hear the traffic on the two-lane highway in the distance, Megan picks your first target: a small white house with the blue light of a television in the front room. You cross into the side yard, toss a handful of corn against the siding and then wait. At first nothing, and then someone hits a window and the ping of the corn hitting glass makes a man’s voice yell and then he comes outside on the porch to look for you. The three of you hide in the shadows of the house, hearts pounding. You can’t see the man but he sounds middle aged and genuinely upset. Really yelling, really angry, really infringed upon, which, somehow, you were not expecting.

When he eventually goes inside, the three of you dash out of his yard and run to a flat dirt road and regroup. You scoop more corn out of the plastic bag and into your pockets, laugh at the man, but you feel unnerved. Already, just one house into the evening, you can tell you’re going to be a baby about this, which is disappointing if not that surprising. You go to a seven through twelve high school, which means that this year you have lockers, change classes every forty-two minutes, and have study halls and lunch and school-wide assemblies and hour-long bus rides with seventeen and eighteen-year-old guys. Megan, who is bubbly, boy crazy, quick to make friends, thinks this is wonderful. Every other girl in your grade, in fact, seems to think this is wonderful, but what you have felt every day of school so far is dread.

At the next two houses you hang in the background, leaving a handful of corn in a mailbox, scattering corn in the bushes, and then you get an idea. You should raid your own house. Derek looks at you. “Your house?”

“Why not?” you say. You won’t get in trouble—your parents know where you are—but maybe it will be funny. A joke on your family.

They hesitate but then, before you know it, everyone is on board, and you are walking toward your house and lurking in the familiar shadows, resting in the same spots you know from hide and seek. When your parents come outside to investigate, they yell at you in a fake indulgent way of a peekaboo game, but no one laughs at you or your parents. Instead, the three of you run and hide, delighted, and then, when you are exhausted, you go inside and eat popcorn and your mother who is not from Pennsylvania and therefore amused by this corn-throwing business offers to drive you to your friends’ houses to play the same joke on their parents, which somehow, everyone agrees is an excellent idea.

Within a year, you will go to parties in the woods with cigarettes and alcohol, a can of gasoline that other kids are huffing. One of your seventh grade friends will have sex with a junior; Megan will kiss a tenth grader who flirts with her on her bus route; and the older guy who flirts with you on your bus route will get sent to prison for stealing a truck. Of course you don’t know any of this any more than you know that, all things considered, you will be fine. And yet, swaddled in the heat of your mother’s car, zipping along a dark road to your friend Megan’s house, you will understand this night is a momentary reprieve, the end of an era. You understand just enough to sit still, be grateful.

Marian Crotty is an Assistant Editor for The Common