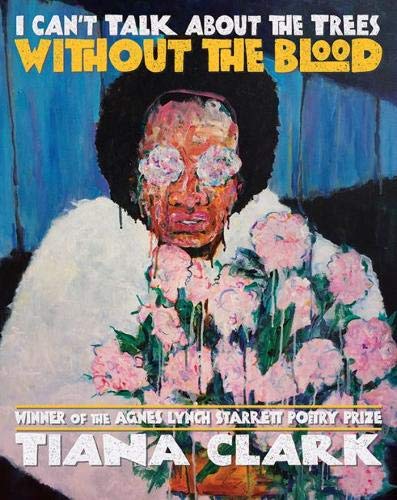 This is the second in a series of features highlighting the Black writers our editors and staff have been reading. To read The Common’s statement in support of the nationwide protests against anti-Black racism, white supremacy, and police brutality, click here.

Recommendations: Kingdom Animalia by Aracelis Girmay, Neon Vernacular by Yusef Komunyakaa, I Can’t Talk About the Trees Without the Blood by Tiana Clark.

Aracelis Girmay’s Kingdom Animalia is a book suffused with longing, with grief, with ache—and at the same time, with tremendous joy, tenderness, and care. It speaks to the beauty of life in all its forms, but also elegizes life’s ephemeral nature and “what we do with the dead things we carry.” In other words, it is a collection that holds space for both presence and absence, for the myriad contradictions of human existence.

The collection is organized into several “books”: a “book of dirt,” a “book of beautiful monsters,” a “book of graves and birds,” a “book of erased cities.” These titles alone provide a sense of Girmay’s masterful imagery, the lines that will remain seared in your memory long after reading. I’m thinking of the “sea & beach mov[ing] into each other’s mouths,” the “yellow sky quiet in her quiet dress,” the set of stones carried in a pocket, that “small family, rattle of graves, everywhere, rattle of little lives and graves.” I’m thinking of “Elegy,” which I revisited in the early days of the pandemic and found there these lines: “Listen to me. I am telling you / a true thing. This is the only kingdom. / The kingdom of touching; / the touches of the disappearing, things.”

Reading this book is to attempt to make sense of the mystery of life, together. It is to be part of a project of “collective seeing,” as Girmay noted in an interview. “The question becomes,” she said, “how are you my family? I can ask this question of any thing. … there are other times when I see something and feel, on the brink of the moment vanishing, like I want some other eyes to hold it, too. … the comfort of that—even though we are small, small. And our lives brief.” I return back to these poems often, instinctually, and like gemstones catching light, each time they reflect a different facet of the world to me. This is a book to be read, savored, and re-read, to be carried with you for all that it holds—above all, those longed-for moments of shared seeing.

Good poetry plants its reader somewhere—perhaps at a geographic location, time period, or emotion. Yusef Komunyakaa’s poetry does more than that. His collection, Neon Vernacular, which contains works written between 1977 and 1989, brings readers in sync with the rhythms of his memory and his journey as a writer and person. In these works, his notions of Black male sexuality, religiosity, and fatherhood come into focus alongside his developing identity as poet.

His newest poems, placed at the beginning of the book, embody an especially reflective quality, as if age has allowed him to look at his most painful memories with new objectivity. Readers are granted an early, intimate look at Komunyakaa’s relationship to his father and his childhood in a pre-Civil Rights era American South. In “Songs for My Father,” Komunyakaa elegizes his father in a series of stanzas presenting vastly different views of the same man: abusive husband; silent, hardworking patriarch; and begrudging supporter of his son’s poetry. In the second stanza of the poem, Komunyakaa writes, “We always / Walked circles around / You, wider each year, / Hungering for stories to save us from ourselves.” Here and in so many other places, I am struck by Komunyakaa’s ability to lead his readers into deeper and deeper emotional territory by precisely showcasing his father’s flaws and triumphs.

Komunyakaa’s poetic style, which is often associated with jazz music, works its magic by immersing its readers in the tempo of an era. “Changes; or, Reveries at a Window Overlooking a Country Road, with Two Women Talking Blues in the Kitchen” places two columns of text next to each other on the same page, one containing the dialogue between the two women, and the other describing the ambience of the scene. The harmony created by these adjacent texts highlights what I love most about his poetry: whether writing about the sights and sounds of Jim Crow-era Louisiana or his experience as a Vietnam veteran, Komunyakaa always remains faithful to the heartbeat of his words.

The title of Tiana Clark’s second collection of poetry is a line from the book’s epic poem, “The Rime of Nina Simone,” a response to Samuel Taylor Coleridge’s “The Rime of the Ancient Mariner.” Clark imagines running into the ghost of Nina Simone on the way to an MFA workshop:

Things have changed, Miss Simone.
I have a scholarship. They want me here.
They want my poems. They want—

Do they want you,
she says, sucking
her ghost teeth,
or your black pain?

It’s a question that threads through the book as a whole—so the reader must first consume that pain, and then sit with the discomfort of having done so. What does it mean to peel back the skin and reveal the hurt, as a poet, and what does it mean to lean close and peer inside, as a reader?

Nina Simone can’t play a Bach cantata at Carnegie Hall like she wants to. She warns, “They only wanted cocktail jazz, folk, and blues, / for me to bleed negro.” Like Nina, this collection is conscious of its audience, white readers like me. White readers who don’t know what a Type 3c curl is, or how a hot comb is used. A section of notes in the back of the book explains these things (“Black hair references for white people”), among other references, borrowed lines, and epigraphs.

Despite Nina’s warning, Clark manages to do it all here—Bach cantata, blues, everything between. There is pain and trauma, generations of it, but still room for lush sex and sensuality. Birth, baptism, sex as sin, sex as violence, sex as self-love. There’s a series of hypnotic poems about three pas de deux choreographed by George Balanchine, and “BBHMM,” a response to watching the music video for Rihanna’s “Bitch Better Have My Money.” In three poems the speaker responds to questions posed by Phillis Wheatley, the first published African American poet: Don’t you hate your name? Tell me about your baptism. Have you ever been for sale?

Several of Clark’s poems reflect on being Black in white spaces. That MFA workshop, Nashville honky-tonk streets, a debutante ball, a plantation the speaker’s white in-laws want to visit to stage a family portrait. That poem begins as a phone conversation: the mother-in-law calling to convince the speaker it will be okay, the speaker stunned at the suggestion. “How do we stand on the dead and smile? I carry so many black souls / in my skin, sometimes I swear it vibrates, like a tuning fork when struck.” That vibration, and others, ring through all of Clark’s collection—a demanding, pulsing energy, exposed and exposing—and it’s what makes this such an irresistible, complex, unputdownable book. Peering inside these poems, into the rawness revealed there, isn’t always easy, but it always felt like I was in confident hands—hands that wouldn’t shy away from anything.

For more on this work from the poet’s own hand, read Clark’s essay on writing “The Rime of Nina Simone” in the Oxford American, and her notes on the Phillis Wheatley conversations in the Poetry Society of America’s “In Their Own Words” series.

TC STAFF
This is the third in a series of features highlighting the Black writers our editors and staff have been reading. To read The Common’s statement in support of the nationwide protests against anti-Black racism, white supremacy, and police brutality, click here.