Christmas Day, 2012. I’m riding a packed flota back up to chilly Bogotá from the tropical lowlands. The fringe over the windows is jiggling to the beat of the motor, syncopated by potholes. I sit behind the driver, facing a life-size, crown-of-thorns decal of Jesus’ head, deep-sea blue. Vallenatos jangle over the bus loudspeaker. A stop is wherever someone wants off. The driver pulls over. People jump out. 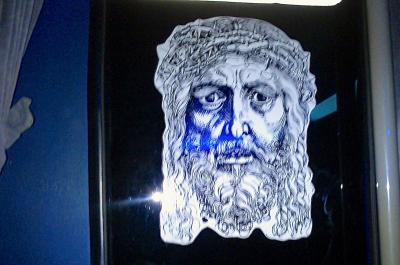 What a setting. Anything could happen. An accident, le coup de foudre, a kidnapping. This is Colombia.

For years, we’ve been talking about visiting the family and homeland of our long-time babysitter, Emma, a natural raconteur. We know all about her seven siblings, her parents, their siblings, aunt, uncles, grandparents.  Many of her stories could come from a Gabriel García Márquez novel. As the great man himself told The Paris Review: “… there’s not a single line in all my work that does not have a basis in reality. The problem is that Caribbean reality resembles the wildest imagination.”

In this country, I had planned to read GGM, whose work I love. I own most of his books, but, somehow, I forgot to bring them. So I bought three in Bogotá, including one I already own. Where are they? In the suitcase with the dirty socks in the back of the bus.

Instead I’m devouring The Age of Federalism, by Stanley Elkins and Eric McKitrick, an 800-page brick, a masochistic choice for someone who’s had two back surgeries. Jefferson and Madison’s hatred for Hamilton has sucked me in as deeply as One Hundred Years of Solitude. In this cultural-racial-sensory mofongo, I’m lost to Publius and The Federalist, to dead white men in white wigs and white stockings quilling urgent trans-Atlantic dispatches that arrive too late. Arrogant Hamilton overplays his hand, while Jefferson sputters to Madison, A central bank? Next, they’ll want a king! Trade with Britain? Ingrate! Only with France. The election ardor of 2012 barely cool, I can’t believe we’re still fighting the same battles as in 1796.

The bus slows, a woman jumps too soon, falls, and hits her head. Word travels up and down the aisles. Passengers stream out, kibitzing. The woman seems in a terrible hurry, doesn’t want medical care. Police dressed like commandos in camouflage appear and fine the bus conductor for opening the door while the bus is moving. La señora gets back on, finally persuaded to see a doctor. Salmon dusk cedes to night. The woman keeps touching the cut on the back of her head, showing me her fingertips, mire, mire. I see no blood. The bus is packed. I give her my seat, wondering where we’ll end up. I peer down into her purse as she looks for her insurance card. Her wallet is a knotted handkerchief. It makes her seem doubly vulnerable, mysterious.

We drop the woman at a hospital, but pulling back into traffic, the bus narrowly misses a head-on collision with a van driving in the wrong lane. Our handsome, young conductor leaps out, yanks open the van door, and challenges the driver to a fight. A pale, delicate woman who could have stepped out of a Hans Memling altar-piece rushes out, grabs the conductor’s muscular arm, shuts the van door, and guides him back to the bus without a word. We drive on to Bogotá, the air getting steadily colder. The dark seems to mute voices. The pale, Flemish-ersatz woman sits silent, straightbacked on the engine hump.  My husband thinks she’s a religious. I don’t agree, but her gesture haunts us, enforcing peace.

Like snails, we carry our homes with us. A week before we left for vacation, my thirteen-year-old son came back from boarding school facing an early January exam on the Jefferson-Hamilton conflict and the election of 1800. Looking at his sketchy study guide, I realized I’d forgotten too much to help. The Compromise of 1797? The Virginia and Kentucky Resolutions? I pulled McKitrick-Elkins off my shelf for the first time since 1995, when I read it to understand Newt Gingrich’s surreal politics after four years living in France.

During our time in Paris, we traveled to India. On a fifteen-hour train ride, I read Les Nouveaux Mystères de Paris, Léo Malet’s gritty series written between 1943 and 1971 about detective Nestor Burma, who solves a crime in each arrondissement. In India, it was the hot season. Other passengers wore saris or dhotis. We passed peasants plowing with bullocks, temples, elephants, rickshaws. In my head, I skulked around the Marais, my neighborhood, “hands deep in my trenchcoat pockets,” in the chilly rain of a “rotten spring.”

In Lisbon last summer, I could not read Fernando Pessoa, though the enigmatic, possibly schizophrenic, early twentieth-century poet who wrote as multiple personas is a Portuguese cultural god. Each time I picked up The Book of Disquiet, I fell asleep. (Maybe that’s just me and Pessoa.)

I asked a few serious writer/travelers whether they have this same “problem” on the road—an urge to read the wrong book or an inability to read the right one. This issue seems to perplex and fascinate travelers. Rolf Potts, author of Vagabonding and Marco Polo Didn’t Go There, actually prefers “counterintuitive” reading in far-away places. “An ‘appropriate’ book has a way of competing with the actual travel experience,” Potts says. Riding the Trans-Siberian Railroad, he read Mary Morris’s Wall to Wall and Eric Newby’s Big Red Train Ride, both Trans-Siberian travel memoirs. They turned out to be “kind of irritating… The moment-to-moment, real-life experience was far more interesting, even when it was boring.” He found Ruy Castro’s Rio de Janeiro very informative, but wished he’d “spent those Brazil reading hours outside interacting with the people and places of Rio.” In contrast, Potts says, “Reading Moby Dick during my somewhat lonesome tenure as an expat teacher in Korea helped me appreciate the themes of the book.”

Novelist, poet, and essayist Philip Graham and his wife, anthropologist Alma Gottlieb, have spent extended periods since 1979 in a small village in Côte d’Ivoire studying the Beng people. Their two-part memoir of the experiences, Parallel Worlds and the recently published Braided Worlds, include many stories of the strange cultural connections and disconnections behind what we read when living in another culture.

“The first time I lived in a small village with Alma,” Graham wrote me:

I brought along a box of Great Books of Western Civilization.  Not such a good idea, as it turned out. The cultural gap was too wide with some books, though there were sterling exceptions.  Ovid’s Metamorphoses was perfect, the transformations and the encounters of gods and humans was not so far from the unfolding cosmology of the Beng people… I loved the Icelandic sagas, and once, after finishing Njal’s Saga, felt myself coming down with my second case of malaria. That night, lying in bed under the mosquito netting, with a 106-degree temperature, I hallucinated two Viking warriors outside the netting, fighting with swords.

In Braided Worlds, Graham writes about reading Tintin to his then-six-year-old son in the village. The Tintin series, written in the 1930s and 1940s, is rife with colonial stereotyping. That was the first problem. Then there was the realization that reading to his child, normally an intimate moment, was such exotic behavior that a circle of fascinated Beng villagers had gathered to listen. The child imperative in Graham’s essay struck a chord, since my son’s needs got me going on Federalism. Graham’s pleasure in the incongruity and strange fittingness of hallucinating ancient European gods in an African jungle, even if the circumstances (malaria) weren’t pleasant, also resonates powerfully. In the grip of a book from one culture, traveling in another, I feel free of both, floating between two unrealities.

Of course, we are where our bodies are. The bus with the Jesus decal and Vallenatos was real, the white men in white wigs were not—anymore, at least. At last, when we arrived at our final Colombian destination, Cartagena, I opened Of Love and Other Demons. It’s the eighteenth-century tale of a girl bitten by a rabid dog and destroyed by a mother superior and Inquisitorial priest more interested in exorcising her independent spirit and love for another priest than the disease. The book opens in Cartagena’s rundown colonial neighborhood of Gethsemaní, on the Calle Media Luna, where our hotel was. This felt like a gift, a gentle reminder to succumb to moment and place. My husband and I visited the Inquisition Museum, a magnificent colonial building, and were appalled and fascinated by its frank exhibition of torture devices and somewhat ambivalent condemnation of the Inquisition itself. I vowed–when I got back to Brooklyn or on a future trip–to finish To Live to Tell the Tale, GGM’s memoir, and to ferret out the author’s inspiration.