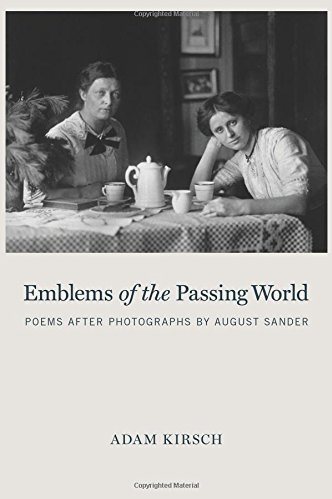 What’s fascinating about these portraits is that their subjects are all doomed, in one way or another, to become subjects of an authoritarian regime, to endure, and to participate in the coming horrors of Nazism. Kirsch is not the only one to note this aspect of Sander’s project. According to John Berger, who takes a more generous view of Sander in his essay “The Uses of Photography,” the series was supposed to include 600 portraits “of every possible type, social class, sub-class, job, vocation, privilege… No other photographer, taking images of his countrymen, has ever been so translucently documentary.” The series was cut short by the Third Reich, and Sander’s own son was sent to a concentration camp for being a socialist and anti-Nazi. He died there.

The future haunts the children in Sander’s images, especially the boys who will come of age just as Hitler drafts his army. In “Farm Woman and Her Children, 1920–25,” an infant clutches his mother’s smock, reaching out for comfort as she holds him upright for the photograph. Kirsch writes:

Until he breaks the circuit that his hand
Keeps with the breast he doesn’t understand
Is not a part of him, and flings it out
In the aggressively erect salute
He will begin to learn at nine or ten;
Nothing can hope to undermine, till then,
His confidence that she’ll protect him from
The monster he is going to become.

For Kirsch, what’s to come eclipses the image itself—the slice of the past Sander preserved. Although these are poems after photographs, the images seem to respond to the words, to regain nuance and personality in the face of Kirsch’s insights. He takes advantage of the way poems trigger human emotions by muddling the border between past and present. The photographs don’t lack immediacy or feeling, but in the context of these poems they become works of historical preservation, locked in a comparison with the present. These are people caught in an unstable time, and Sander reflects that instability in his impulse to preserve, in the documentary nature of his project. Kirsch, writing nearly a century later, can assume an oracular voice, certain of the outcome.

Much of the momentum comes from this sense of foreboding, which keeps Kirsch from having to rev the engine of the book each time a new image is introduced. His strict use of meter and rhyme, which in another book might be too regimented and unvaried, maintains a formal cohesion here—as if the constraints of the photographic medium have their parallel in versification. Subjects squirm beneath the photographer’s eye and within the confines of pentameter. Take, for example, the poem “Match-seller,” quoted below in its entirety. In the photograph, a man slumps, seated in a doorway, his twisted legs stretched before him. He sends the photographer a wary look from underneath his cap.

Because a man with nothing left to sell
Is an abstraction that cannot exist
As long as there’s a purchaser who will
Pay him to be a slave or orifice,
The destitute must play at the charade
Of taking part in the economy
With two-cent matches that he has displayed
In an attempt to claim the dignity
Of the small businessman who would recoil
To pass him on the street and realize
How easily the petty bourgeois fall
Into a class they’re brought up to despise—
The honest poor, whose honesty consists
Of reassuring the uneasy rich
They won’t get angry or vote communist
As long as someone comes to buy a match.

The ingenuity of Kirsch’s enjambment, the compression of the lines, adding up to one, virtuosic sentence—all sharpen his anger on the match-seller’s behalf. The line breaks are especially tense in this poem, and there’s a lot of pressure on the prepositions to maintain the sense and musicality of the sentence as his description builds. While these are not, to my mind, poetic “best practices,” they become visceral and brilliant in this context. The poem’s formal composure captures the uneasy truce between classes—squeezing out one more phrase, one more day, one more match.

Despite their historical setting, these are contemporary, relevant poems. The urgency of Kirsch’s voice comes in part from a distrust of wealth and a conviction that inequality should burden the rich as well as the poor. In “Professional Middle-Class Couple, 1927,” Kirch writes: “Only among the burghers do you find / A glance so frank, engaging and refined, / So tentative, so conscious of its wrong.” The image shows a young woman with a large gem on her finger and a young man with a pinky ring. Both look toward the photographer with a strange mixture of grimness and innocence.

But Kirsch has no such forbearance for those who actively perpetuated injustice. He concludes “Tannery Owners,” a picture of two men in immaculate suits, with “The capitalist is the flower that / Perfumes the air to camouflage the dung.” These lines, like those on the Match-Seller, seem driven by more contemporary issues. Kirsch mentions the slurry-waste at the tannery “spiking the cancer rate for blocks around.” While I’m glad to see the poems engage with environmental contamination and abuse of power, Kirsch’s critique is a bit more general than the photographic context permits. The tannery owners probably were guilty of pollution, and maybe greed and evil politics, but were they knowingly causing cancer? This interpretive leap seems more a device to bring the book into the conversation about the injustices of current American capitalism than an emanation of the images.

Kirsch has also chosen portraits that are less overtly concerned with the economic side of society. “Confirmation Candidate,” “Girl,” “Matter,” and “Fraternity Student” reveal aspects of aging, sin, and socially sanctioned violence. Sander’s view of death seems particularly frank, and even heartless—captioning a photograph of a dying old woman “Matter.”

Questions of hubris and artistic authority dog these photographs, and Kirsch does not let Sander off lightly for his aloof, analytical role. In one of the strangest images in the volume, “My Wife in Joy and Sorrow,” Sander photographs his wife holding their twins, one in each arm. The pose looks ordinary enough until you realize one twin has died. With dark circles under her eyes and tight lips, the wife glares at the camera. “What kind of father,” Kirsch writes, “asks his wife to hold / Her dead child and her live one in her arms, / Then poses her and fiddles with the lights / Until the shot is perfectly composed?”

A few lines later, this righteous outrage gives way to a portrait of the artist, in which Kirsch himself, as Sander’s interpreter and a poet, is also implicated:

Or is it just this that he wants to capture
An accusation that he brings agains
Himself, the artist who is always free
To stand outside the frame, outside the life
That tortures others…

The question is well-placed, since voyeurism, trust, and typecasting loom larger as the book progresses. In studying these images, how much is the poet participating in what he sees as a dehumanizing endeavor?

The poet C. D. Wright has recently written about her texts in collaboration with photographer Deborah Luster, “They are not looking for equivalents in each other’s work, but for ways to enter the vacuums.”

Though Kirsch calls Sander’s shutter “remorseless” and his process “the categorical, / Silent tribunal of his black and white,” ultimately, he is grateful for the vacuum it leaves, the humanity hidden by professional props, captions, and signifiers of economic status. Kirsch’s poems delve into this space, becoming the outcry that is missing.

In the end, Sander is forgiven in the final two lines: “A man cannot be known by how he looks, / Only by the infinity he sees.” The double meaning of look—as both appearance and the act of looking—redeems the artistic practice of capturing images. The vastness and ambition of Sander’s project permits Kirsch his own.

In any collaboration with the dead, the living artist has the final say.