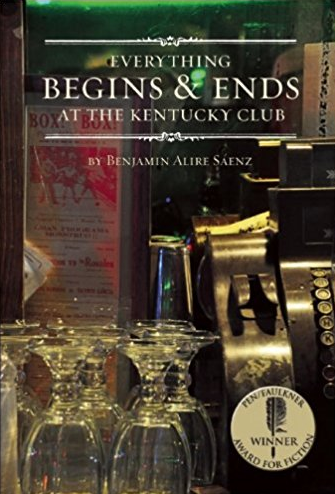 If you stand in front of the Kentucky Club bar in Ciudad Juárez and look four blocks north, you see the U.S. and Mexican flags flapping on top of the Santa Fe Bridge to El Paso. Families with roots on both sides of the border once passed fluidly back and forth over that bridge to visit cousins, go to school, grab lunch, get a tooth pulled, or for a night on the town.

The drug wars and immigration crackdowns have radically curtailed that flow, though it’s still possible, albeit scarier, for Americans to pop into the Kentucky Club on the Mexican side for a drink and sit on the same barstools where Al Capone, Elizabeth Taylor, and Marilyn Monroe once perched.

This 97-year-old watering hole links the stories in Benjamin Alire Sáenz’s new collection Everything Begins & Ends at the Kentucky Club, winner of the 2013 PEN/Faulkner Award for fiction. Sáenz, 58, is chair of the Creative Writing Department at the University of Texas at El Paso and the first Latino-American to win the prize. It’s not his only literary honor this year: His young adult novel Aristotle and Dante Discover the Secrets of the Universe won a Michael L. Printz honor for best teen literature, the Stonewall Book Award for best teen fiction depicting the LGBT experience, and the Pura Belpré Award for best Latino children’s fiction.

Modern-day Ciudad Juárez and El Paso are the settings for the seven stories ofEverything Begins & Ends at the Kentucky Club. Violence lurks like a rattler under a rock in the desert. You won’t see headless bodies or unmarked mass graves. (Two characters in one of the stories do, however.) But Sáenz’s characters suffer the high cost of proximity to it all. Drug addiction and cruelty cut through these stories, destroying people and hope.

Sáenz has written six other novels and story collections for adults, five poetry collections, and seven other books for young adults and children. His earlier work addressed topics that readers would expect from a Chicano writer and former Catholic priest: spirituality, family, grandparents who are the rocks of their families, racism, immigration, and the like. Most of this work was published before Sáenz came out as a gay man four years ago at age 54. I mention this because his work has steered clear of the gay experience until now.

Both Kentucky Club and his teen novel Aristotle and Dante introduce us to gay boys and men at a time when gay rights is on everybody’s radar. Saenz isn’t the first Mexican-American man to write about gay characters—a small number of authors preceded him, notably John Rechy (City of Night, 1963) and Alex Sanchez, author of the groundbreaking Rainbow Boys series for teens in 2001. Much gay Latino fiction deals with HIV and gay identity in a macho culture. Saenz writes about characters whose immediate environment is so dangerous that HIV is the least of their worries.

In Kentucky Club’s first story, “He Has Gone To Be With The Women,” two gay men meet in an El Paso coffeehouse and fall in love. Juan Carlos is a writer, who lives in Mexico, and Javier is a chauffeur for the U.S. Consulate in Juárez. Like all the stories in the book, it’s told in the first person. The narrator is Juan Carlos, the more emotionally guarded of the two. Their affair is intense and pure. They can’t show their affections in public, and it’s frustrating to watch them part at the Rio Grande with a man-hug at the end of the weekend.

The man-hug appears again in “Sometimes the Rain,” about two gay teenagers—one white and one Mexican-American—who forge an uneasy friendship when they discover they both have abusive fathers.

Sáenz’s gay love scenes are spare but sexy, letting us read between the lines, a less-is-more approach evocative of Hemingway:

He kissed me.
I kissed him back.

We sat on the balcony and drank our coffee–and listened to the rain.

In Kentucky Club, love between men and women is punctiliously grammatical, stilted, and unsexy. In “The Art of Translation,” a young man recovering from a racially motivated assault picks up a woman at the Kentucky Club to soothe his sorrows. Afterward, he muses to himself: “When we had been having sex, I had almost felt happy to be the owner of a body, happy, and I’d liked that moment of almost happiness. I had liked it so much.”

Like the young man in this story, the narrators are hard and flinty, accustomed to being trampled. In “The Hurting Game,” Michael, the narrator, talks about his inability to get close to another person: “Some people knew how to love and some people didn’t. Tom was the former. I was the latter. I didn’t know which one of us had it worse.”

Sáenz’s dialogue is so realistic it reads as if it’s been transcribed. He employs an effective technique: long, unbroken stretches of talk that evoke the back-and-forth of the border. Here, Javier and Juan Carlos talk about what divides them:

Sáenz’s characters have the endearing habit of addressing each other by name even if they’re the only ones in the room, a way of talking ingrained in people from big families. (How else do you get somebody’s attention?) Thus a quiet conversation between Juan Carlos and Javier in Javier’s living room goes like this:

Sáenz writes simple sentences that lend themselves well to the “read-aloud” experience. Maybe it’s his training as a children’s writer. The effect is often poignant. If it weren’t for the fact that God never comes up, I could picture Sáenz, the former priest, telling these stories to a congregation of ESL learners. In “The Hurting Game,” Michael, a social worker, is on a walk in the desert and describes the abused kids he counsels:

“So many of them were like the plants that survived here, living without water. How did they do it? How did they survive? They came to me with a thirst in their eyes, a thirst, such a thirst, and I knew that I could never give them the rain they deserved, the rain they so desperately needed.”

I like that Kentucky Club contains less Spanglish than Sáenz’s previous work. I understand the language duality of the Latino experience. But I’m one of those second-generation types who speaks terrible Spanish, and every time I read a writer who uses it liberally, I feel ashamed, something I like to avoid in my reading life.  A few words of Spanish are evocative, much more feels exclusionary.

There’s a saying that captures Mexicans’ penchant for self-deprecating humor and comfort level with pain: “Sing me a sad song so I can be happy.” In Everything Begins & Ends at the Kentucky Club, happiness is experienced as occasional moments of not-agony. I read these mournful stories with rapt attention. It was like hearing the unluckiest branch of my family recount one disaster after another. All you can do is listen.

Gina Lujan Boubion‘s short stories have appeared in The Antioch Review, Reedmagazine and others.