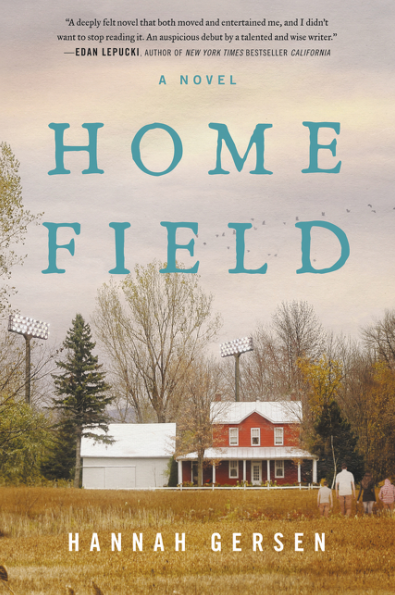 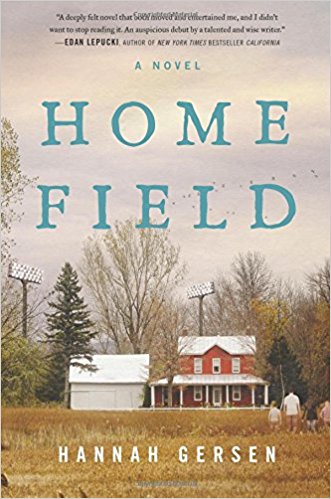 The novel begins immediately with the discovery of the body hanging in the barn. Dean wants to keep the family’s routine as normal as possible, which includes him remaining the football coach, but Robbie is having trouble coping because he was the one who found his mother. He starts to act out—skipping school and even wearing his mother’s clothes. Stephanie is leaving for college, so Dean’s only option for babysitting is Nicole’s sister, Joelle, a born-again Christian, bent on converting Robbie and Bry. Dean would rather keep the obsessively pious Joelle and her Lord at arm’s length, especially since Joelle blames Dean for her sister’s death:

“Whenever he talked to Joelle, he had the feeling she was trying to give Nicole’s suicide back to him, like it was a mess that only he could clean up. Like it could be cleaned up. He hated the way she made everything seem so straightforward, the way she took words like marriage and forgiveness and acted as if they were transparent and uncomplicated.”

One reason Joelle blames Dean is that Nicole called her constantly before the suicide saying things like: “Jo, I never knew marriage could be so lonesome.” Joelle’s guilt trip doesn’t help Dean, who was flirting with his coworker, Laura, during that same time period. The relationship only ended because Laura moved out of town. Now that Laura has conveniently moved back, he finds himself drawn to her only three months after his wife’s death. It’s hard to keep a relationship secret in a small town and one night soon after her mother’s death, Stephanie spots him flirting with Laura at a bar. Naturally, she wonders whether he was having an affair before her mother died.

Entrapment is a recurring theme. Dean feels trapped in Willowboro, “driving past the four businesses that were the cornerstones of Willowboro’s social life: Asaro’s Pizza, Mike’s Video Time, Jenny’s Luncheonette, and the post office.” He’d married the town sweetheart, Nicole, after the untimely death of her first spouse, who had been the high school football star. Nic never stopped pining for her first husband, and now that she’s gone, Dean longs for release from the town and the narrative he believes they will spin about her suicide:

“He hated to think of the stories people would tell about Nic: the girl who was widowed too young. The girl whose broken heart had never quite healed. The girl who tried in vain to replace her football star husband with the high school football coach… People were invested in Sam [Nicole’s first husband] because they’d watched him grow up. Dean understood that. But he’d thought they were invested in him, too.”

Despite his claustrophobia and alienation, Dean can’t leave Willowboro because it’s his children’s home and it wouldn’t be right to uproot them after the loss of their mother.

Another plot line follows Dean’s career prospects. Not long after he steps down as football coach, he’s asked to help out with the girl’s track team. He agrees because track is less consuming, the team is in trouble, and no one else wants the job. He’s miserable until he realizes that these girls are as bent on achieving athletic prowess as his football players had been, and he might be their much-needed catalyst. Soon the girls are on a strict training regimen, and several standout athletes emerge, encouraged by the attention.

Gersen is great at capturing the nuances of family life and the conflicting emotions of well-meaning people trying to do right by those closest to them. Through various subplots, the novel allows the reader into the fractured lives of Dean’s family, rendering them with compassion and precision.  Religious differences, parental agonizing, budget constraints, generational disputes are all presented with insight. Consider Stephanie’s realization that she is depressed and might have inherited the condition from her mother:

“Her father always said that people revealed their character on the playing field, and she had always thought that it was such an old-fashioned belief—both the idea of character and the idea of sports as some kind of crucible. But now she thought she had taken him too seriously. All he was saying was that if an athlete was determined or lazy or bold, you saw it in his actions when he was challenged physically—she saw her depression as something physical—and she knew, deep down, that it wasn’t going to break her. She wasn’t like her mother.”

Back to the metaphor of novelist as miner—Gersen is in the dank corridors of the mind with a headlamp rendering nuanced familial complications. Here’s another passage. Dean’s daughter Stephanie is trying to figure out what had gone wrong in her parent’s marriage and what might have driven her mother to suicide. She blames herself for fighting relentlessly with her mother, then remembers:

“a time last November when her mother was supposed to go to the football awards banquet and she said she couldn’t face it. And her father had lost it and said, “What can’t you face? You don’t have to do anything! You just have to sit there and look pretty!” His dismissal had shocked Stephanie, but what was even more shocking was that her mother had actually gone to the banquet and she had sat there and said nothing and her father had seemed okay with that.”

At times, I felt as if Gersen were glossing over the suicide, mirroring the family’s coping mechanism, avoidance. But when it seemed the characters would never face reality, the plot would pivot, and Gersen would provide fresh insight into what each family member might be avoiding and what would force them to face the truth–in Dean’s case, that his wife might never have loved him.

This may sound soap opera-ish in the retelling, but isn’t because Gersen is so adept at subverting expectation. Each character longs to know why Nicole committed suicide and whether her decision had to do with them. Each ends up looking the monster in the eye. Following their respective trajectories to catharsis is a catharsis for the reader, as all the best literature is.

Kelly Fordon’s poetry, fiction, and reviews have appeared in The Boston Review, The Florida Review, The Kenyon Review Online, and Rattle among others. Her prose poem “A Small Bridge” was chosen as a Wigleaf Top 50 of 2014. Her poetry chapbook, On The Street Where We Live, won the 2011 Standing Rock Chapbook Contest, and her second poetry chapbook, Tell Me When It Starts To Hurt, was published by Kattywompus Press in May 2013. A collection of linked stories, Garden for the Blind, will be published by Wayne State University Press in 2015. She lives in the Detroit area with her husband and children.